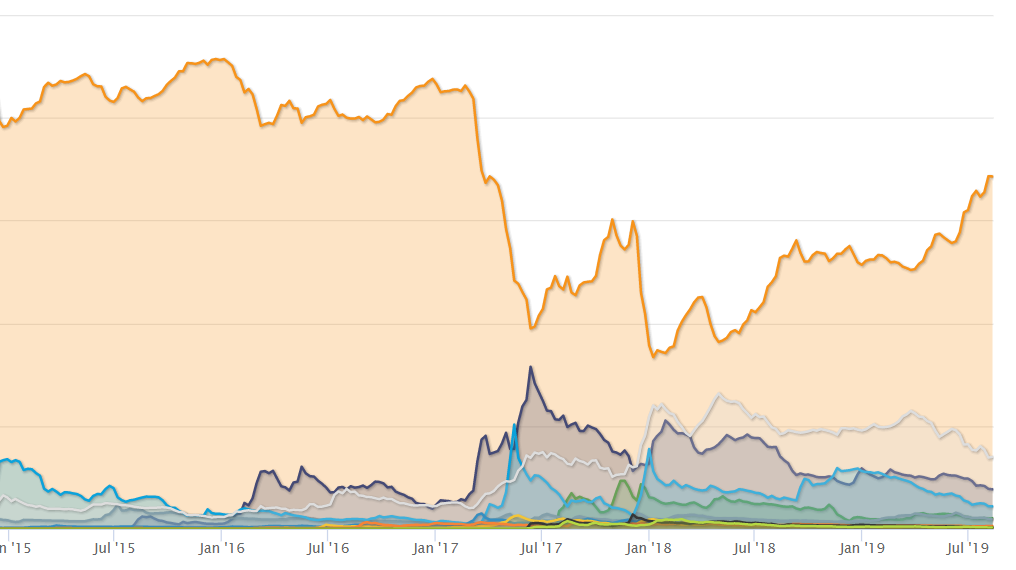 Why does bitcoin dominate?

BTC dominance refers to the total percentage of the entire cryptocurrency market cap that is held by bitcoins market cap. For instance, if the entire value of the cryptocurrency market was $200,000,000,000, and the entire value of all circulating BTC was $150,000,000,000 BTC dominance would be 75%. Obviously, in the early 2010's Bitcoin's dominance was well above 90%, with contenders being limited. With the birth of ETH in 2015, Bitcoin's dominance was challenged. From a technological standpoint, ETH was debatably superior to BTC :

-ETH could perform 5-10 times as many transactions as BTC

-ETH was designed to be a platform to run any code, birthing many tokens and giving it an extra use over BTC

In April 2017, where the first throes of the great late 2017 crypto bullrun appeared, trading became excited. On April 7th, 2017, the 24h trading volume of cryptocurrencies hit $1 billion USD for the first time in the existence of cryptocurrency. Merely 1 month later, on May 6th the 24h trading volume hit $2.4 billion USD. The trading of crypto had more than doubled in less than a month.

I say with full conviction that June 2017 was a turning point for the crypto universe as a whole. Cryptocurrency became something close to a legitimate form of asset, to buy low and sell high. Of course, the numerous technological uses of Bitcoin were not the focusing point of these purchases. I can fondly remember 2017, with friends and friends parents seeking to invest in BTC, some even purchasing multiple GPU's to get themselves into cryptocurrency before the market exploded with activity. I also remember the internet being full of stories about how people struggled to buy GPU's at good prices because bitcoin miners were purchasing them all.

Fast forward to December 2017. On the 17th of December 2017, Bitcoin reached it's peak price, just shy of $20,000 USD. However, this was not the peak of the crypto market. January 8th 2018 was, with the total market cap of the entire crypto market being $813 billion USD. BTC had already dumped by this time, as ETH once more surged to it's personal all time high. On January 8th, the 24h trading volume was around $44 billion USD. BTC's dominance was only 33%.

My hypothesis is this : December 2017 heralded to many investors, not even aware of the functionality and potential power of the blockchain, that cryptocurrency is some sort of unbridled get rich quick scheme. While virtually every single cryptocurrency peaked in 2017, many of which are technologically superior to Bitcoin, all people ever hear about is Bitcoin. Numerous new cryptocurrencies and tokens are created everyday, which just increases popular support for crypto, but it all comes back to Bitcoin. Bitcoin was the first cryptocurrency, is the most well known cryptocurrency, and dominates today because all the new investors since the bubble burst only have eyes for Bitcoin. The crypto market may become a $1 trillion USD market one day, and it's entirely likely that Bitcoin will still dominate. The way the media and the internet treats Bitcoin lends to this theory. People with no knowledge of cryptocurrency still have knowledge of Bitcoin because it's a word that has been thrown around for the past 10 years, being synonymous with cryptocurrency. Therefore, the total market cap and trading volume of cryptocurrency will no doubt increase, but far too many new investors will be fully, 100% in on Bitcoin, and some would undeservedly ignoring other cryptocurrencies, and treating crypto more like an asset and less like a piece of technology.

Perhaps the next bullrun, the next bubble, can push some other cryptocurrency above Bitcoin. Maybe one day people will begin to respect and understand the full fundamental power of cryptocurrencies. Or perhaps, this view of crypto as an asset and not a technology will only grow and geow. Time will tell.