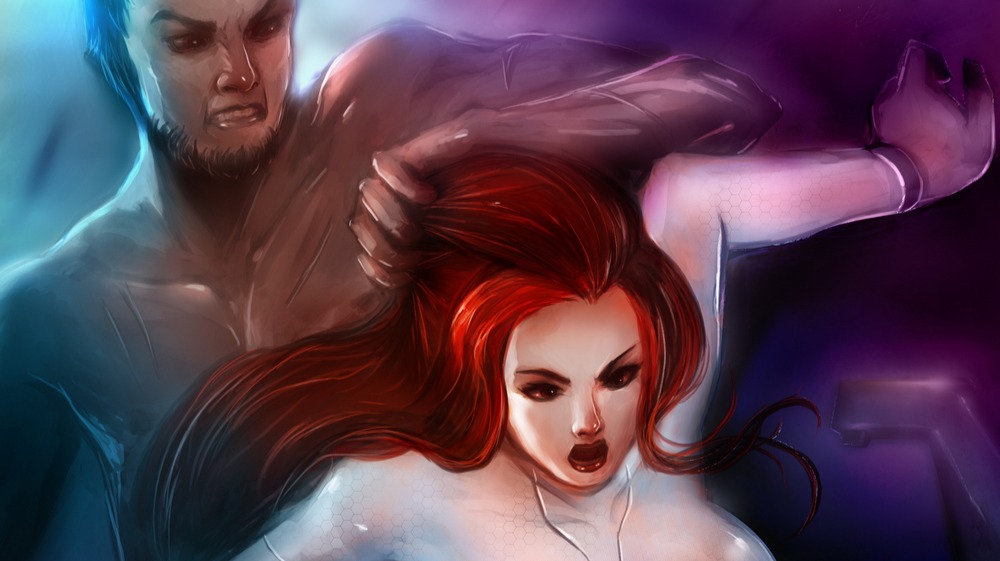 The Issue of his Manhood

"Forgiveness is the fragrance that the violet sheds on the heel that has crushed it." 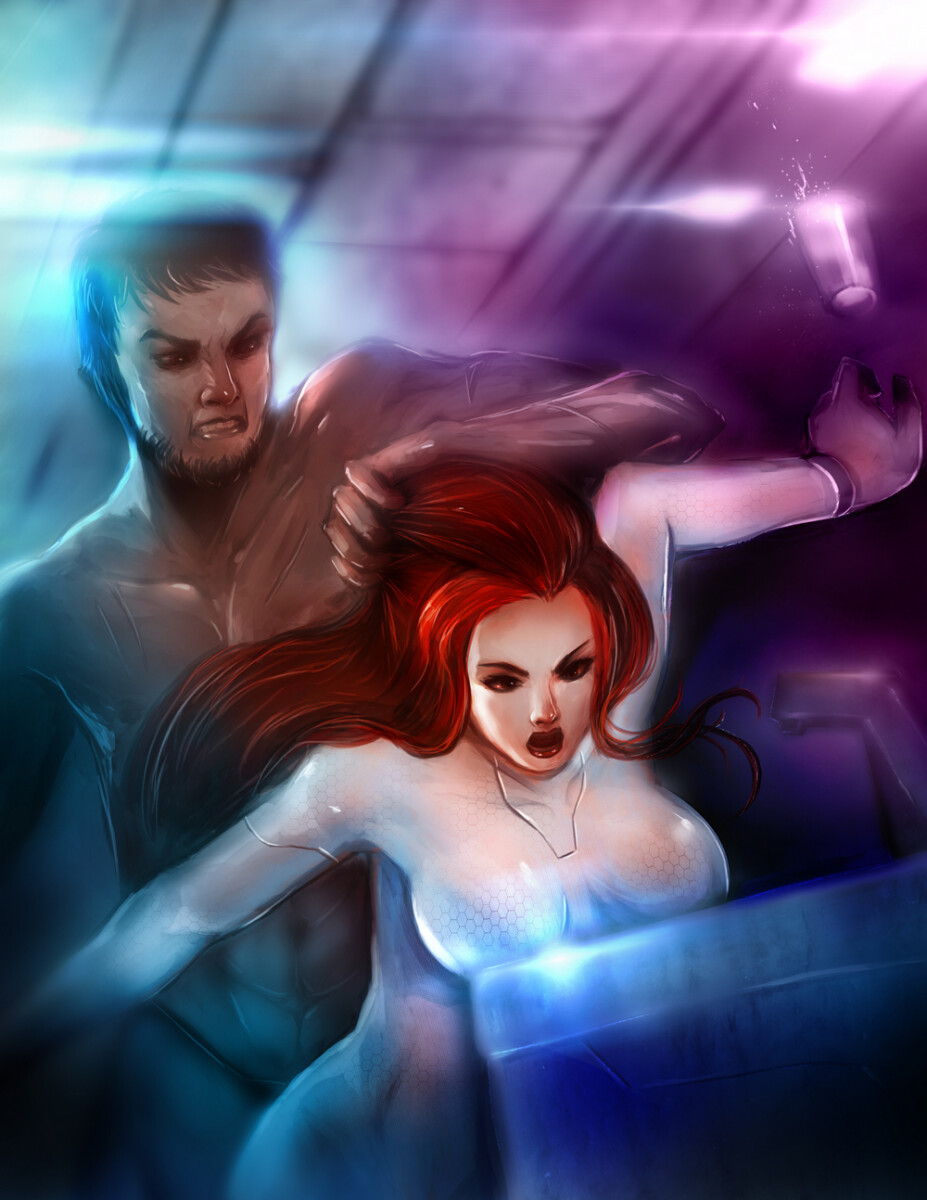 "You're welcome," Antigua said, studying the man closely as he opened his eyes.

She had brought him to the survival dome, ostensibly for medical attention, but mostly for the purposes of examination. Having a sedated specimen confined in the relative safety of the dome was the perfect opportunity to do some science. Donning some surgical gloves, she had quickly got to work examining her ward.

First, she removed every item of his clothing and armor, examining and cataloging them as she worked. His leather boots and leggings positively fumed with the stench of body odor. The smell was one she was not very familiar with and she wrinkled her nose in disgust. Personal hygiene was apparently not a high priority on this side of the Firewall. The metal components of his armor were quite rudimentary and very archaic. Basic chain-mail with iron gauntlets and greaves overlain by a short woolen surcoat. The metalwork was plain but had clearly been fashioned by a skilled smith. It was obviously intended to be lightweight so she surmised that he was probably a scout or messenger. Being lightly armored and highly maneuverable would be of obvious benefit to anyone fulfilling that role. He clearly belonged to a complex society. Certainly, far more advanced than she had been expecting. The armor and weaponry alone told her that there was a significant culture at work in the Southland. The ore for the iron would have to be mined and transported and that meant a complex web of supporting infrastructure and logistics. Agriculture and a transportation network at the very minimum with an advanced political system of command and control.

A cursory examination told her all she needed to know about his sword and dagger. The sword was identical to the one she had collected off of her previous ward and the dagger was battered but perfectly serviceable. She set them aside and turned her attention to the now naked man on her workbench. At first glance he appeared healthy enough, barring his broken rib, but on closer inspection, she had discovered a catalog of maladies. He was covered in fleas and scabies which had left his skin blotched and marked by bites, some of which had festered and started weeping after he had scratched them too vigorously. His scalp and hair was covered with lice and was flaking badly. His teeth and gums were a decaying, inflamed mess that gave his breath a foul stench that had caused her to gag. She also noticed a nasty smelling discharge from his penis that her visor reliably informed her might be gonorrhea. This was something new to her. She had never encountered a sexually transmitted disease before.

"You're welcome," she repeated.

"Not only did I save your life, but I have also treated your wounds and cleaned you up. You were a walking infectious disease."

He had been sedated for roughly twelve hours and in that time, she had completely cleaned and disinfected him. The dome had a complete supply of first aid equipment as well as advanced antibiotics and medicines. She had used most of them. His scabies, lice, and flea problem were resolved and the weeping sores had been plastered. She had pulled the worst of his teeth and had dosed him with a cocktail of antibiotics that she hoped would resolve the issue of his manhood and any other infections that she had not detected.

"I do not take your meaning," Sweden said, using his elbow to lift himself into a sitting position.

"I am no disease. I am Sweden, son of Jordan. Who are you and where are my clothes?"

He looked around in confusion before adding, "Where am I?"

"Master Sweden it is then," Antigua said, bowing her head towards him.

"A pleasure to make your acquaintance."

Sweden eyed her warily. His memory returned and he recalled coming across the piles of animal carcasses, finding his brother's leg and the caver ambush. It occurred to him that he should be dead. Cavers were not known for being merciful.

The temperature in the dome was scorching hot and Antigua had stripped out of her body armor. She wore a light, synthetic under-suit that left nothing to the imagination. If it had not been for a faint shimmer in the material, Sweden would have been convinced that she was naked. He took a long hard look at her as she stood beside him, drinking in every detail.

"You are most pleasing to the eye," he said, matter-of-factly.

"What tribe are you from? You are certainly no Poan and I see no taint of the Wreghan upon your features."

Antigua was caught slightly off guard by this. She was a very single-minded woman and her fieldwork had consumed much of her life. What little interaction she had with the opposite sex had been limited to her father and he had been far too preoccupied with his own work to acknowledge his daughter's obvious beauty and grace. To be fair to the Overseer, beauty was cheap in the Northland, but it would have been nice to have been called beautiful, even if it was by her father.

She flashed a grin at Sweden and he was struck by the amazing whiteness and symmetry of her teeth. He covered his eyes in mock pain.

"Careful where you shine that smile," he laughed, "it's enough to blind a man."

Antigua blushed and closed her mouth in response. Sweden guffawed and doubled over in pain as his ribs reminded him of their condition.

"Try not to laugh for a while," Antigua instructed sternly as she took him by the shoulders and attempted to ease him back down onto the bed.

Sweden shrugged her hands off.

"Bring me water," he barked through clenched teeth.

Antigua arched an eyebrow at this. She considered a sharp reply but thought better of it and instead indicated at the dome's integrated toilet system.

Sweden looked over at the contraption and grunted. He had no concept of indoor plumbing but he recognized a basin when he saw one. This woman obviously had no intention of bringing him water. She clearly did not know her place. He climbed off the table, grimacing as his ribs screamed in protest at him. He noted the bandages that were wrapped around his chest as well as the plasters that covered his sores.

"You have tended my wounds and for this, you have my thanks," he said flatly.

"May I at least have my loincloth back?"

Antigua moved to a supply closet that was nested into the primary bulkhead and rummaged around inside. When she had found a suitable piece of material, like her own undersuit, she turned back to find Sweden bumbling with the water outlet. A deep scowl of confusion furrowing his brow.

Antigua handed him the cloth and he began to fasten it around his waist.

"No," she admonished, pulling the garment away from him, "that's not how it's worn."

She showed him that the cloth had two holes that his legs were meant to go through and gave him a demonstration of how to put it on. He quickly grasped the concept and moments later was admiring his newly acquired underpants. Antigua could not help but laugh as she watched him craning around to see how his own backside looked in them.

She showed him how to activate the dispenser and filled a container for him which he gratefully accepted.

He drank his fill and handed it back. She took it from him and turned to place it back into the dispenser. It was the moment he had been waiting for. He stepped forward, took her head, and smashed it forcefully into the ceramic basin. The force of the blow cracked the basin and she crumpled to the floor, out cold.

"A woman who doesn't know her place is no better than a dog," Sweden said, delivering a vicious kick to her midriff. "Let me find you a leash."