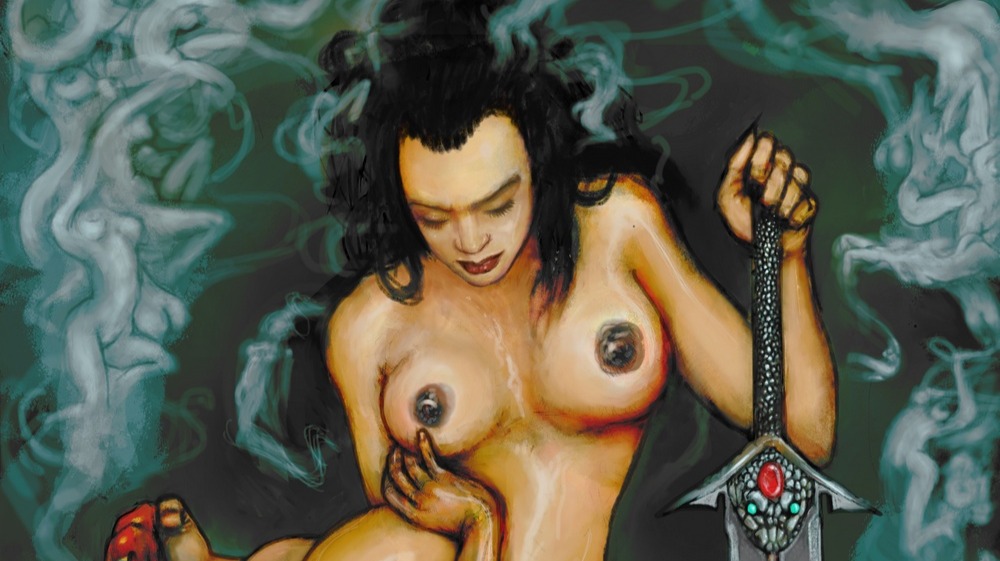 "Do not bite at the bait of pleasure, till you know there is no hook beneath it." 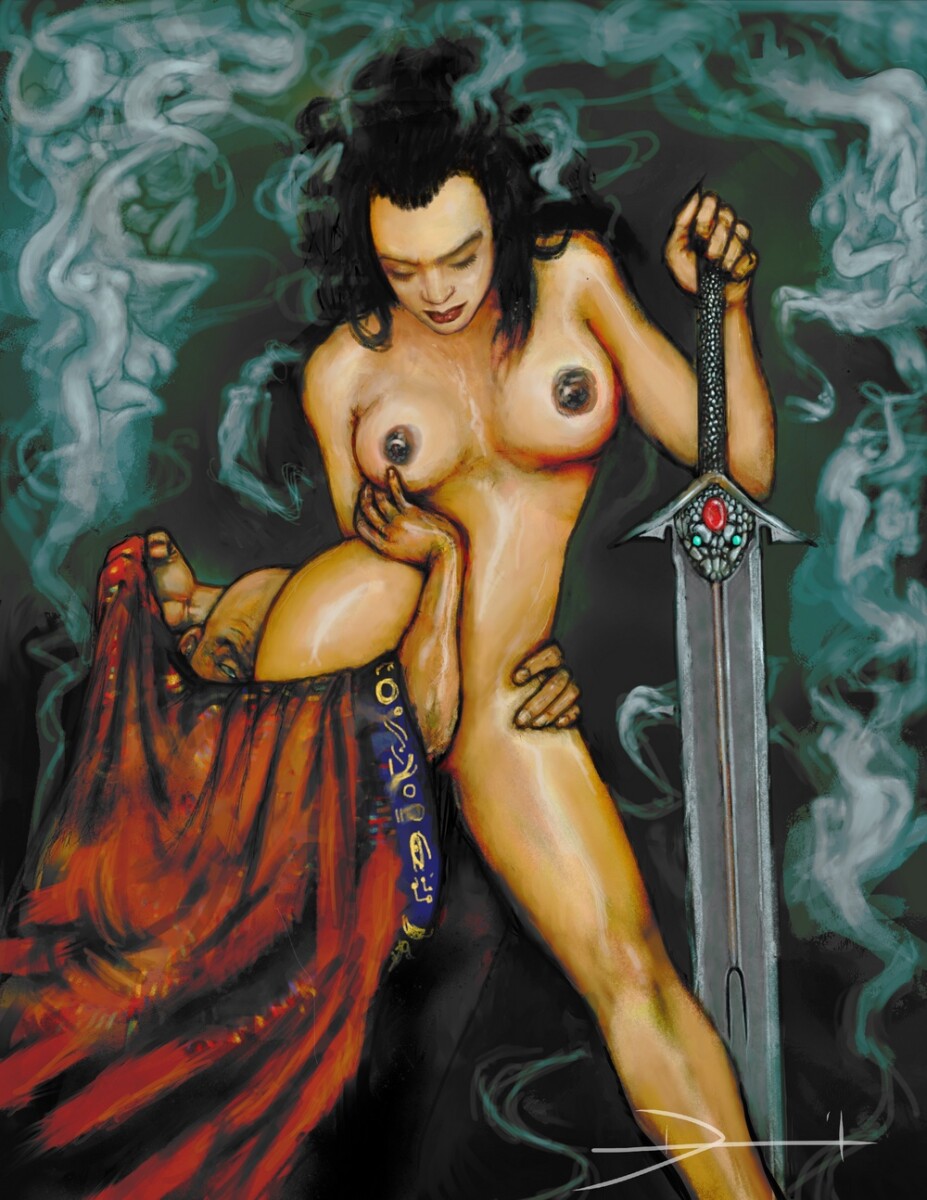 The Countess Slovenia threw her helmet on to the table in disgust. Her long, raven-colored hair was matted with sweat and dirt. She slowly ran her hands through it to shake out the tangles. Her hands came away streaked with blood. She looked at them for a moment in bewilderment and then picked the helmet back up. The highly-polished metal glinted in the candlelight. Turning it in her hands, she ran her fingers thoughtfully over a deep gash that marked the right hemisphere.

"Fetch me water for a bath," she said, turning to face Israel, her aide-de-camp.

The eunuch nodded and left the tent without saying a word. When he had gone, Slovenia began the arduous task of removing her battle garb. Ringmail, leather undersuit, boots, plate greaves, gauntlets, leather ailettes, and her rabbit skin underwear all piled up at her feet. She stood for a moment, lost in thought. The warm air felt cool on her naked skin after the stifling heat from all that armor. Her body was battered and bruised but she stood proudly erect, stretching the stiffness and aches from her limbs. She paced over to the ornate, polished bronze shield that served as a full-length mirror. Her reflection gazed back at her, rippling slightly from the imperfections on the burnished surface. Despite this, she found the view most pleasing. The woman before her was beautiful. Tall and proud, with jet black hair that hung down to the swell of her buttocks. She spent some time examining herself. Her breasts still bore the pert firmness of youth, swelling lightly from her chest with slightly raised nipples that held the promise of womanly bounty.

Israel returned, trailed by five slaves carrying pitchers of steaming hot water. He directed them to fill the wrought iron tub that held pride of place at the northern end of her sizable tent. As they were pouring the contents of their pitchers into the bath he added a mixture of chamomile, eucalyptus, sage, and comfrey root, topped with a handful of deeply perfumed rose petals.

Slovenia approached the tub and inhaled deeply, breathing in the thick aroma that rose with the steam. It smelled faintly medicinal.

"What manner of potion is this?" she asked.

"Just an herbal remedy, your Highness," he replied. "I cannot prepare your glamour without first cleansing the base of bruising. Your marshals must not be allowed to see that there is a weakness in you. Not at this critical moment in the campaign."

She knew he spoke the truth. It was entirely because of her miraculous beauty that she had managed to get this far. The staunchly patriarchal society she had grabbed the leadership of would not suffer feminine weakness. She knew that the cost to maintain her rule was a combination of battle prowess and pure seduction. She had an unusual power over the men that she commanded and she exploited it to its full potential.

She stepped into the bath and lay back, letting her eunuch’s soft hands gently cleanse the filth and blood of battle from her body. He tutted and clucked at the devastation he beheld.

"I shall have to be creative tonight, Highness." he said reproachfully, "Some of these bruises will not recover for many days no matter what I do. I shall have to ensure that the paint and jewels draw the eye to your most appealing features."

When he was done, he rose and was about to call for the slaves to fetch fresh water for the bath when Slovenia took his hand and stopped him. She held on for a moment, allowing tension to build in the atmosphere.

“I need you to be a little more thorough, Israel my friend,” she whispered.

“As my Lady wishes,” he replied softly.

He knelt back down beside her and began tenderly stroking her face. He gently traced his long fingers across her cheek, following the edge of her jawline and down the fragile curve of her throat. She let out a small sigh as his hands moved softly across her chest, cupping her breasts and gently massaging nipples that sprang to rigid attention at the touch. Israel smiled to himself as Slovenia lay back in the fragrant water, arching her back to keep her bosom raised above it. Keeping one hand working her breasts, he allowed the other to drift across her belly. He caressed the outline of the muscles on her abdomen as they tightened reflexively in response to the touch of his fingers. He marveled at the beautiful athletic figure before him. She may as well have been carved from the finest marble and he sighed at the thought that he could never have her.

“You would be no good to me with your manhood intact, Israel.” she murmured softly, responding to his sigh.

Their relationship was complicated. Mostly because it had been Slovenia that had removed said 'manhood' in the first place, but also because they had been together for so long now that they were practically finishing each other’s sentences.

“I cannot rely on a man that is overcome by my glamour.”

“I know my lady, but the appreciation of a work of art does not lie in the loins.”

Slovenia opened an eye and gave Israel a sidelong look before rolling over in the bath and presenting him her perfectly formed buttocks.

“Appreciate this,” she said playfully.

“With pleasure, my lady.”

Slovenia braced herself against the side of the tub, took a deep breath, and let her eunuchs’ hands release the pent-up passions that boiled across her soul.

Later, his duty fulfilled, he helped her out of the bath and had her lay down on the bed as he emptied it and then refilled it with fresh water. He scented the water with lavender oil and had her climb back in.

"Call for me when you are ready." He said and left, heading for his own small tent to dream up a glamour to stop the hearts of men. The way things were going, she was going to need all the help she could get.