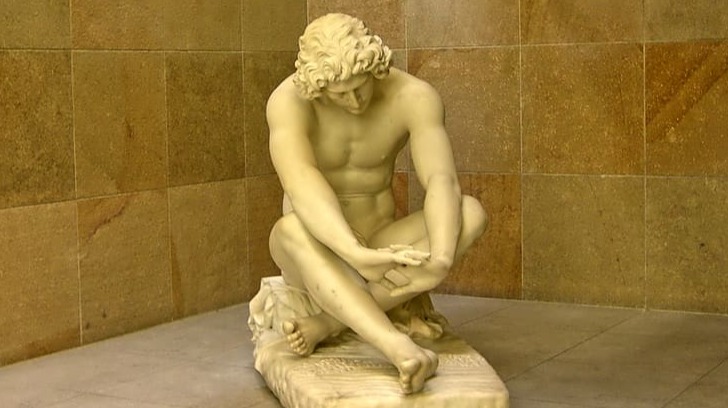 THE EFFECT OF THE INDUSTRIAL REVOLUTION ON SCULPTURE ART

This research has been made by me and cannot be shared anywhere without reference. Permissions of all the quotations in this article have been obtained and the images used are suitable for re-licensing. I will share parts of this holistic and in-depth research over time. I hope that it will attract your attention and read with pleasure.

The material used in the art of sculpture plays an active role in the creation of the unique texture of each work, and has a share in the effect the meaning leaves on the receptor. Sculpture, which should not be considered only formally, is positioned as an object in the communication between the artist and the receptor. With the transformation of the artist's ideas into concrete material, thoughts become communicable. Each material used causes the narrative to differ.

Concrete, which has been used since the Roman Empire, is still used today as a material. Due to the desire of human beings to change and advance the world, stones obtained from nature have evolved into the idea of ​​transferring the transformable parts of nature to the future by putting them into a certain form, in connection with being an organic part of nature.

The changes caused by the Industrial Revolution on the social structure have created changes in the art of sculpture, as in every field of art, and caused the emergence of new techniques. The increase in the speed of mechanization and production, one of the main effects of the Industrial Revolution, made the underground resources that exist together with the rationalism and empiricism that gained strength in the European mentality more easily. The movements and approaches that emerged with the increase in the material that can be used in the art of sculpture supported Modernism; He displayed an attitude that reveals the spatiality of figurative art and tears the object from its historical level. The material, which was seen only as a tool until Modernism, began to be seen as a work with Rodin and its effect on the work of art was realized. The effect that Rodin created on his works by benefiting from the textural difference of the material on the reception has been one of the turning points for the art of sculpture. Until the Industrial Revolution, while only works aiming at smooth and ideal were performed, with the variety of materials offered by the Industrial Revolution and the transformation of social mentality; These idealistic works have begun to leave their place to works that contain their own mistakes in a characteristic way. Impressionism that emerged in the period following the Industrial Revolution was the first trend in which these changes were observable, and this situation, together with Cubism and Futurism, led to the formation of an aesthetic perception close to today's art in sculpture. The fact that the industrial material creates new images by meeting the art work and the textures that the new materials such as metal, wood and glass have brought to the works during the creation process of the work are indicators of the artist's direct communication with the material. Boccioni, the pioneer of Futurism, which is a turning point in terms of modernist sculpture understanding, said "Destroy the literary and traditional peace of marble and bronze sculptures in the Manifesto of the Futurist Sculpture". Boccioni, who rejected the materials used by the conventional structure, suggested that materials such as glass, cardboard, iron, concrete, horse feathers, leather, cloth, mirrors, electricity, light should also be included in the art of sculpture. left in mold. " (Ateşli, 2017: 22)

This artistic perception, which changed with Rodin, continued with Tatlin and Duschamp, and became liberated with the increase in the variety of materials, provided the development of the art of sculpture and made important works. Thanks to the size and texture gained in terms of form, the works have expanded their semantic and content. The first work that can serve as an example to this narrative within the framework of the material, technique and content trio is Vladimir Tatlin's reliefs he created in 1914 from inert materials in his workshop. “. While such works accelerated the transformation from traditional materials such as stone, wood and metal identified with sculpture to alternative materials, the ready-made objects proposed by Marcel Duchamp as works of art from the same date have been seriously influential in artistic production after the 1960s. Antmen, 2013: 289).

Another trend that can be shown as an example of this diversity in the material that emerged with Futurism is Constructivism. In this approach, the artist cares about strengthening the link between the work of art and spatiality, and supports this emphasis with various materials. Constructivist artists such as Gabo and Rodchenko, who advocated the integrity of space and sculpture, used portable materials such as glass and plastic, which can move according to the narrative, unlike the traditionally bulky sculptures.

Minimalism, which defends that the material should turn into a work of art with as little touch as possible, emphasizes functionality and simplicity with the content kept to a minimum with Carl Andre. "Carl Andre's works, mostly choosing copper and zinc plates or brick blocks and bringing together such objects, which he uses in his works, without damaging the structures, have added a different feature to the minimalist understanding with its printability or walkability feature due to the horizontal assembly on the ground plane." (Döl Avşar , 2013). Carl Andre preferred industrial materials in his works and avoided the imaginary meaning; wanted to ensure that the work exists in the integrity of space and work. His works, which are predominantly metal, tend to convey their meaning with the sounds the receiver makes when he steps on it. “The names of their works were chosen not to create any relationship of submission and only to refer to the reality of the material and form” (Kedik, 2007). With the diversification of materials and techniques, the Industrial Revolution led to the breakdown of many traditions and the formation of new approaches in the art of sculpture; He contributed to both the creation process and the formality of the form and the narrative with the diversity it provided in the formation of today's sculpture art.

THE EFFECT OF INDUSTRIAL REVOLUTION ON ART

THE EFFECT OF INDUSTRIAL REVOLUTION ON ART AND ART WORKS