Internet: A world where you feel the most secure but are most vulnerable in! [SwitchToBrave]

Very few ideas are so good that you wonder why it has taken so long for them to be implemented? A solution to a problem we thought was too complex to be solved anytime soon has been solved! Privacy on the internet used to be a luxury for those with financial means, well not anymore.

The internet is a place where we feel the most secure and yet it is where we're most vulnerable. Since the mass adoption of the internet from 1995 we have become almost dependent to it. We do our work, shopping, bills, and communication on the internet. We share our most personal information because we feel we can trust the network and the person or entity we're sharing this information with, not for them to share it with third parties.

Unfortunately, the network has been compromised with bad actors and the entities we share the information with are selling it to the highest bidder. Hiding protectively behind the exploitative 'terms and conditions' which we've accepted without reading because we don't have the time to do so and even if we did, the legal terms on these documents cannot be understood by the average citizen.

Why should I care?

It has been said that you can learn a lot about a person by going through their garbage. Let that sink in for a sec. My research on this topic has led me to some interesting articles. For instance, in 1980 archaeologists in the United States were going through people's garbage and passing it over to researchers studying buying, eating, working and other social habits of ordinary citizens. From this information people can then be persuaded into certain habits without their knowledge.

It gets even more interesting...

Recently the biggest social media site and 6th largest corporation in the world (Facebook) was fined $5 Billion for privacy violations of its customers. This comes as it was held responsible for its involvement in the results of the 2016 US elections. Reports state that Facebook's data of its users was used against them by other 3rd parties to alter the results of those elections. The more involved of these 3rd parties is Cambridge Analytica.

Cambridge Analytica was a British political consulting firm that has since seized operations last year due to the US election scandal. According to the Netflix documentary, Cambridge Analytica had 5 000 data points on every American voter which they would then use to exploit and influence voter's decision making. This isn't new, companies have been using people's data for targeted advertising thus influencing which products you buy.

In a world where most of our lives are spent browsing the internet, data has become the most valuable asset on Earth and its only going to grow even further. It is no coincidence that 7 of the top 8 biggest companies in the world are internet-tech related. The Netflix documentary - 'The Great Hack', states that the data mined from us is being created into a trillion dollar a year industry. This data powers so many of the economy today and we are the fuel.

People spend on average 24 hours a week on the internet. That's a full day every week!

To put things into perspective lets look at the following:

The rest of the time (1.5 days) is spent eating, bathing, chores, and other recreational activities. So basically, half the time we're not working or sleeping is spent on the internet. That is a huge part of our lives, and it's ever growing. More and more people are migrating to the internet for work and socializing. We even do our dating on the internet these days.

What is the solution to all this?

The best we can do is to take back control of our privacy. Luckily for us there's a way to do just that and it doesn't cost us a thing. It's called - Brave browser. I don't know why it's called that but I can recognize the boldness of its intentions. Going against big data conglomerates like Google and Facebook is no small feat. The data that has turned tech companies into billion dollar behemoths is now in our control. We get to decide whether we want it used by third parties or not.

The Brave browser is a fast, secure and private web browser which blocks ads, trackers, 3rd party cookies and encrypts your connections. Not only will you be saving a lot of data with this browser but you'll also be saving a lot of time. Since the Brave doesn't load trackers and unnecessary advert images it loads your pages up to 8x faster than browsers like Chrome and Firefox. No more watching YouTube ads and paying them to watch such ads - unless you want to, which is the point.

Wikipedia Co-founder, Larry Sanger has urged people to stop using browser's like Chrome in a post he published on his website titled 'How I'm locking down my cyber-life'. He goes on to specify other ways people should safe-guard themselves on the internet like using a VPN or even as drastic as quitting social media. Yeah, sure thing Larry, all in due time. Anyway.

Brave browser offers more than just privacy or control of your cyber-life?! 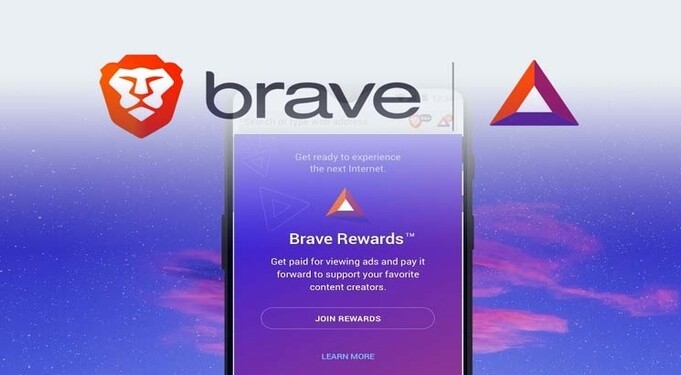 Yes, as if that wasn't enough, Brave will pay you if you choose to see ads while browsing or watching videos. Your data that companies have been using without your knowledge and selling it to 3rd parties is apparently worth something. That's why Brave pays out it's users in the form of BAT tokens for enabling this data. BAT tokens are a cryptocurrency native to the Brave browser since it is blockchain based with a current value of $0.20 per $BAT token.

These tokens can then be used to tip users all over the internet including on social media sites like Twitter and YouTube. A decent way to support some of your favorite internet personalities for the value they provide your daily internet life. Otherwise you could cash out your tokens to spend on a cup of coffee every once in a while.

Brave is what browsing should've been all along. I personally love it, gone are the hassles of looking at ads of things I "should be buying", clicking on ads which which lead to phishing sites. The only things that show on my web pages are what I searched for and want to see, not what someone thinks I should be seeing, wasting my time, charging me for it and taking my data. The nerve of these companies right?

Switching browsers is a lot of work?

This was my initial concern as well and was surprised and how easy it was to transfer all my bookmarks and data from both Chrome and Firefox in under a minute. All it takes is pretty much a single click and Brave will do the rest - restart your Brave browser and you're good to go with your bookmarks, history and other data in tact. Migrating to the Brave browser will be the easiest thing you do today while boiling a cup of coffee and internet life gets easier from there on. You can also get Brave for your mobile devices on your app stores. Did I mention its free? or maybe a better question we should be asking is why it's free.

The blockchain is full of generous people who've frankly had enough of these exploitation's of their basic freedoms such as privacy in their lives. Which is why there is this surge of great blockchain projects that are focused on being decentralized, meaning no single entity can control them. These are technologies created by the people for the people. Projects like Bitcoin, Publish0x or Brave are just the start.

My Before (Chrome) and After (Brave) screenshots of internet browsing

Below is a screenshot I took showing Coin Market Cap's homepage which of course uses Google's AdSense. 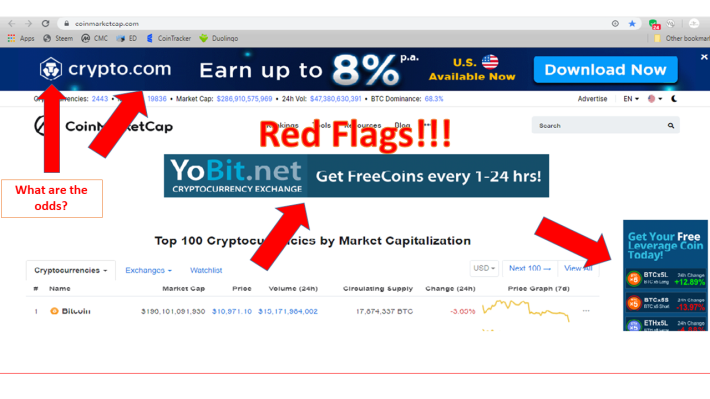 When I took this screenshot I had no idea of what I'd come across while editing the arrows in. A logo that looks too similar to the Brave logo? I did a bit of digging try to figure out if this 'crypto.com' website is anyway connected to the Brave project but I found no such connection. None of the team or advisors of that company are involved with Brave based on my research. Scanning through their site they offer financial services such as wallets, visa cards, investments and credit.

This couldn't have been a better example of why you should use Brave, I can only imagine how many people worldwide have clicked on that advert and created accounts. There's also the issue of the logo which could be infringing on Brave's IP (Intellectual Property) rights. That's something worth further investigating and will share it with the Brave team.

[Edit: The Brave team did confirm that this website is not in any way associated with them. Another member also pointed out that this logo looks a bit more like a cheetah]. And it does...

The point I'm trying to make is that most of the ads directed at users are not inspected for accuracy and safety of said users. As long as companies are getting paid to post these ads on their sites and denying any responsibility, they have no care of what's being advertised and how it affects its users. A perfect example of why common browsers are a liability to all of us.

Our savior on the internet. Protecting the common folks and giving us back our right to privacy. No more hassles and mistaking cheetahs for lions or clicking on the wrong links because the only thing you see when using Brave is the information you searched for.

Below is another screenshot of Coin Market Cap accessed through the Brave browser. 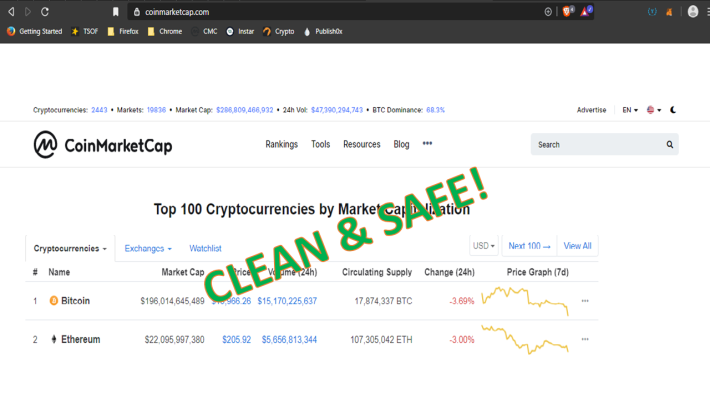 No ads! No liabilities! Also protecting its users in ways they're are not aware of in the background. Need anymore reasons to make the #SwitchToBrave?

I hope you found this article helpful and share it with your family and friends so they too can safe guard their privacy whenever they browse the internet. Or at least get paid for it, whichever they prefer.

I write posts regularly on topics that affect blockchain and cryptocurrencies. Anything from projects like Brave to different cryptocurrencies such as bitcoin and blockchains like EOS. There's a lot happening in this sector which is heavily focused on the internet. Plenty more of opportunities are spread all across this sector especially for us the early adopters of this amazing and innovating new technology. The more we learn about it, the better our future is going to turn out. The future belongs to the Brave!

2. Archaeologists data mining our household garbage in the 80's.