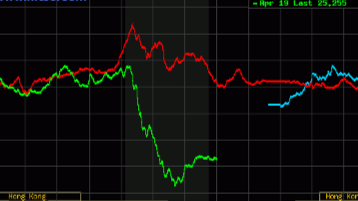 Silver Does A Bounce Down!

Yea, looks nasty indeed. That's a good 90 cent drop before recovering, albeit, slightly. It's the hedgers having their fun but this time, silver stayed above $25. There's no real reason for silver to have gone down otherwise. Hold on to your silver because I think we're in for a wild ride. Gold too had a nice drop of about $30 before recovering $5 and is now at $1,955. Silver is holding at $25.25 and appears to have found a new base (for the day). 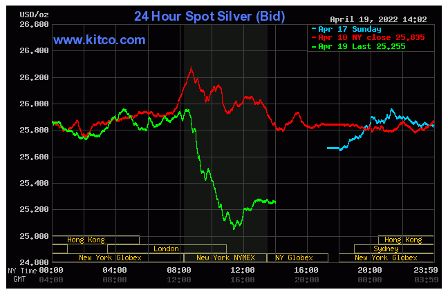 The Japanese Yen is making the rounds. It's gone down a record 13 days in a row for a 10.5% loss against the USD and more than 17% in the last 12 months. Brent crude is above $107 and according to a Reuters report, the EU is set to impose a full embargo on Russian Oil after this weekend's French elections which, according to US Bank JP Morgan, will send oil prices above $180. Meanwhile, the Ruble is doing quite well...

And, according to an article that appeared today on Zero Hedge, global food production is facing a perfect storm. With 400 million people on lockdown in China, a war going on between Ukraine and Russia, a region that provides some 30% of the world's wheat, a fertilizer shortage and an already weak winter crop in both the USA and China, it's become obvious there won't be plenty for all as before. (See my previous article on growing your own food) 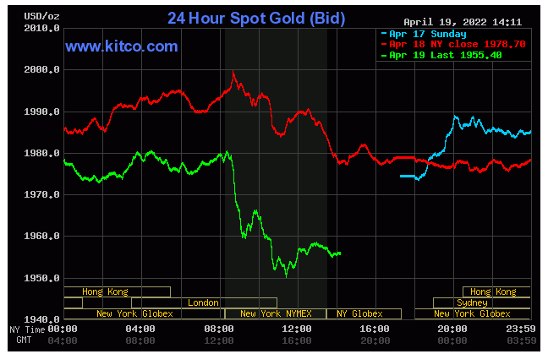 In case you haven't heard, Canada's central bank raised interest rates by 25 basis points or one quarter percent last week.  The Canadian dollar has been doing well for the last year, hovering between 77 and 80 cents and is presently at .792 cents against the USD . High oil prices are helping to buoy the CAD.

Going back to gold, the 2011 high of $1,945 took 9 years to break in August, 2020 when gold hit $2070. Now, $1,945 looks like the new low and as you can see from the chart above (courtesy of Kitco), gold kissed the $2,000 mark just yesterday. Today's drop looks huge and precipitous but in reality, it's just the bankers and hedgers reaping some short term profits. Those 9 years saw easy money and low rates which kept gold and silver at depressed rates. Now rates are going higher. The FED is expected to raise a half a percentage point in May or sooner. While high rates are bad for mortgage holders, it is very good for silver and gold hodlers as history has now proven.

With everything that's going on and Russia locked out of SWIFT, it's a safe bet the monetary system we live in, known as Bretton Woods is in danger of collapsing. Things could take a nasty turn literally overnight. I have no idea how it will play out but I can say it will shake things up a bit.

Suddenly, the word 'prepper' is all the rage. Look it up and learn about how other preppers are getting by and staying ahead of the game. Learn about everyday survival skills and stock up on extra dry goods and essential supplies. Get some physical silver and / or gold as a hedge against a possible currency collapse and never mind the fluctuating daily / hourly prices as it is all based on fictitious futures contracts for which there is rarely ever any physical gold or silver actually changing hands.

(So wait... you're telling me that in the year 2021, the futures market traded all the silver and gold mined in the last one hundred years? How is that possible?)