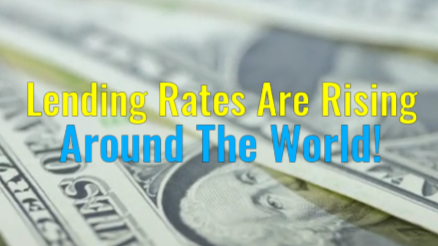 If you haven't heard, the FED raised the benchmark lending rate by 50 basis points or a half percent to between 0.75 and 1%. Current market pricing expects the rate to climb to as high as 3% by year end. Per Chairman Jerome Powell's comments that the economy was strong, it signaled several more 50 basis point jumps higher as soon as next June and July and onward. Meanwhile, the numbers for the previous quarter ending in March released last week shows it was in contraction. If the next quarter ending in June reveals further contraction, then we are officially in a recession. We'll know the answer in July.

This 50 basis point increase is the biggest single rate increase in 20 years, all while we're experiencing the worst inflation in over 40 years or more. If we do see a contraction for the present quarter, it will mean the FED is tightening straight into a recession. Regardless, the numbers are always fudged so it's quite likely we are already in a recession. Steep interest rate increases as we are now starting to see, is sure to affect those with over-sized mortgages when it comes time to renew.

Canada's central bank raised its interest rate early, starting in March with a quarter percent hike followed by another 50 basis point hike in April and now sits at 1%. The bank has hinted at more dramatic rate hikes in coming months. It too is raising interest rates to fight inflation, like the FED but I have to ask... 'where did all the inflation come from in the first place?'.

All these sudden rate hikes and tightening cycles aren't limited to the USA and Canada. India's central bank on the same day as the FED raised its rate by 40 basis points to 4.4%. The Persian Gulf states raised rates by 50 basis points, also on the same day including Bahrain, Quatar, United Arab Emirates and Saudi Arabia. Kuwait was a little less hawkish, raising their rates by only 25 basis point to 2%.

African countries have raised their rates as well as the Bank of England which just yesterday raised rates for the fourth consecutive month in a row to 1%, its highest level since 2009. They are openly admitting there is an economic slowdown. Rising rates should make the 'slowdown' even more dramatic, I believe.

Sweden raised its lending rate on April 28 from zero to 0.25%. The European Central Bank is the one hold out. It has yet to raise rates and they are hinting as giving a hint in the third quarter as to whether they'll hike or not. Inflation is at a record high of 7.5% in the E.U and the Euro is at a 5 year low against the US dollar. Their rate remains at zero to -0.5%.

These coordinated rate hikes around the world are well planned and all too obvious. Just as there is more debt in this world than ever before, the central bankers are hiking rates, even as numbers are starting to show up that we may already be in a recession. I expect they will eventually be forced to lower rates again to zero before the 'everything bubble' implodes. Jerome Powell tried to raise interest rates in 2018 but only succeeded in getting the rate to 1% before backtracking and lowering rates again. I don't think they can go any higher this time either!