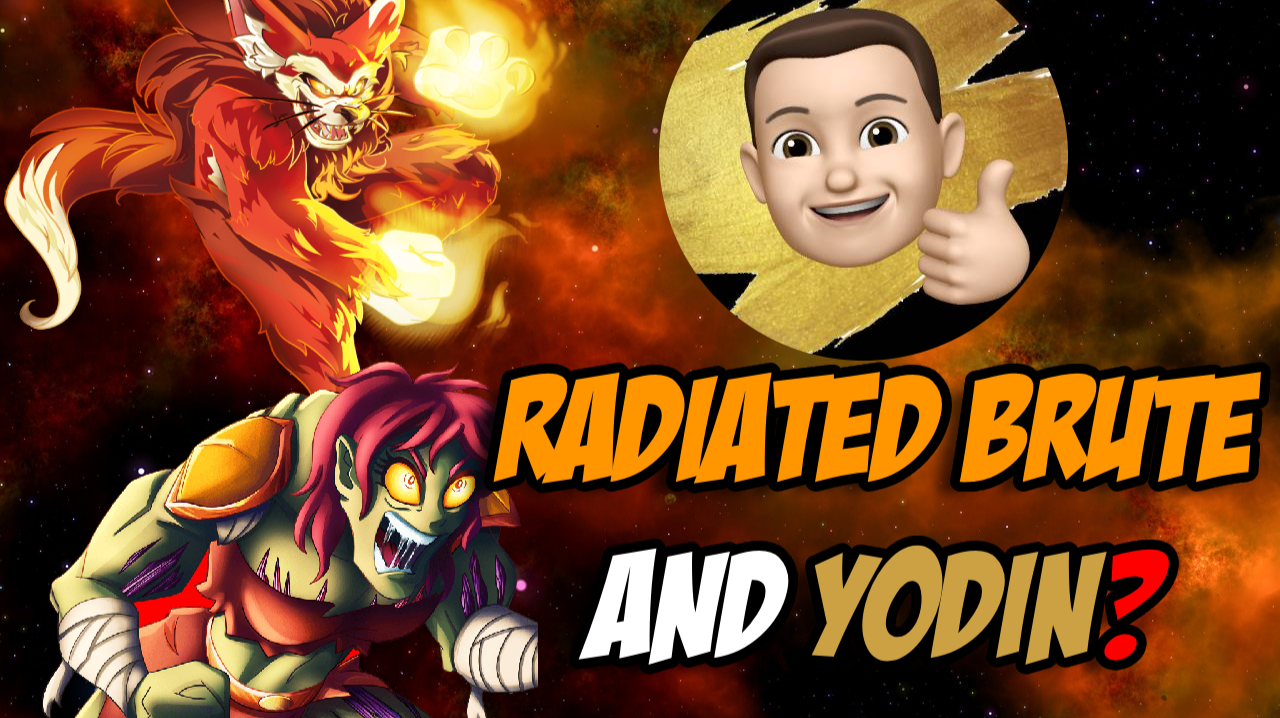 I love going over the new cards. A lot of them seem weak to players till they see the post about the cards. Radiated Brute is very useful for sure. I will make sure that you know that in this post. It happened to be brawl day so I had rented a Yodin to use with my fire team. They might not seem like a great combo but I think they can work. Make sure you check out the Challenge here if you want to take part in this. Given that I am running late this is the last day. Still hoping the post gets seen. Let's break down the Radiated Brute. I only have him at level 3 and bought the cards to get him there for this challenge. That is another good by-product of them doing this. I know we don't have to use the card but I like it when it doesn't cost much. Reach monsters in general are overlooked. Second tanks are good to have for a lot of teams. For a 5 cost card, he always has sold damage and life. Then you add in enrage and now you can see him landing some bigger blows at higher levels. He might not seem like he combos with Yodin but give him that extra HP and Splash Damage all of a sudden he will deal a lot more damage and have a better shot at pulling off more enraged attacks. I can't show that off for you but I am sure it will work. Then when you look at that cost he can be added to some of those mid mana range teams. Yoden is much more useful in 20 to 26 mana than people think and this guy isn't a terrible idea and is a great option if you can't use archers but still want that splash damage.

This battle wasn't one of the low mana ones. Instead, it was one where Yodin is great. 56 mana is almost more than I can use. Now could I have maybe replaced him sure but look at that lineup with two 7 hp tanks and well the other side used him also? After that, I went with archers that can attack in the front position and then the best other archers I have for big damage. With Fog of War and Knockout, a stun would be cool but I don't have one at this level. Now my opponent made one mistake with that sneak monster. He wasn't in a great spot at all. What is your vote did I play a bot? Clearly, I have an advantage here. Yet I still liked the idea of sharing this battle because it shows clearly that when you rent a Yodin you can have a fun battle and the Brute can land some solid hits. You can watch the full replay here it is short and sweet so go for it but I will break it down below.

Well, the buffs are in place now. This should be starting to be clear that I have an advantage. Really my lineup became just about perfect. His Spy is going to hit armor round one. Given my HP boost, no one was in trouble. THen my focused fire is going just nail the front line. With all that splash we are talking about 19 to the front row and 11 to the second position. Even with a Living Lava there I am going to kill off a good part of that line-up.

Yup as you can see that didn't work out so well for him. Now with the way stuff is it is looking like this find with end with all my guys alive. He does pull off one attack but the brute who finished the lava last round still has a lot of HP. After taht I land my acher attacks and the match is over. Yup, that was a quick one. It might not have highlighted the card that well but for me, that was a perfect spot to use him. I didn't have any more big archers. I didn't want to risk 3 cards on my side that can't attack if stuck upfront. I took the brute and his reach over another archer. This also counters return fire a little. Given lower levels, you don't see return fire. But I like to get ready to make reams to counter stuff like that. It is also fun to show off one of the powerful cards while I have it. It won me a few brawl battles. I can't share a Yodin fight often so I did. If you want to get into this kind of stuff and make money playing and posting. Make sure you sign up to player Splinterlands Today.