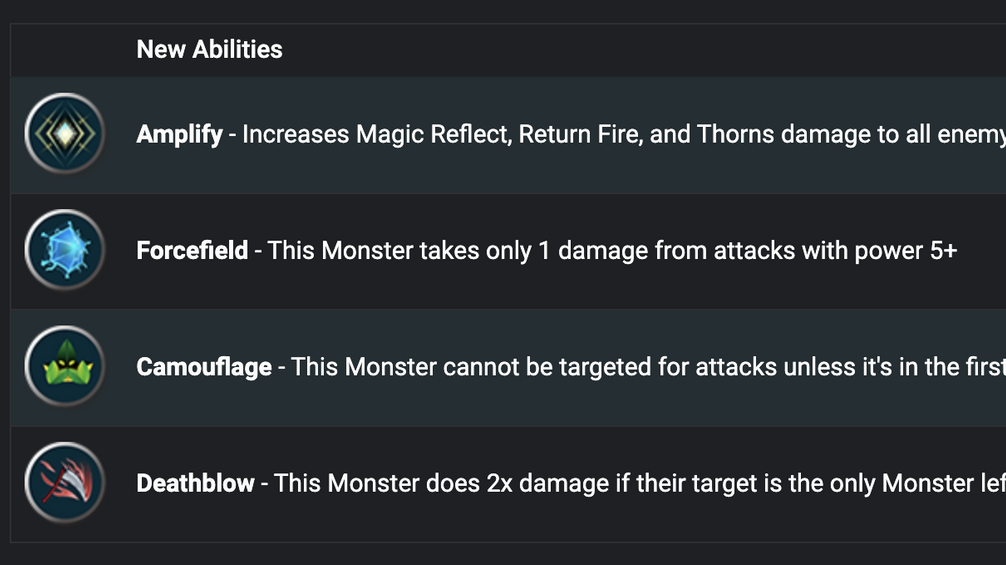 Splinterlands | How the new abilities will impact the game

(This is a HIVE cross-post)

It's a big day for splinterlands because 4 new abilities are were announced just a couple of hours ago. In this post I wanted to go over the abilities and talk about how they might impact the game.

So, the amplify ability is already a really interesting one. It increases the damage done by magic reflect, return fire and thorns by 1.

I knew that the team had the intentions to make splinterlands more balanced, more specifically, Yodin and Lame+Kron where a bit too strong. My first reaction when seeing this ability was: "aha, so that's how they are trying to nerf Yodin Zaku".

And while it's very true that this means that there is a big counter-option against Yodin, this ability does a lot more than just that. In fact, when I think about it, it's still pretty hard to creature a lineup with enough "return fire monsters". That being said, chaos legion might bring a lot of return fire monsters.

It will also make cards like failed summoner -already strong cards- even stronger, so we will have to see if those cards don't become overly powerful either.

Last but not least I wanted to mention that it might be possible that chaos legion will come with a summoner that gives all friendly monsters the return fire ability. Just imagine that summoner in combination with this ability... Well, there is your brutal Yodin counter. However, we might also be seeing more damage/magic Yodins popup, time will tell.

And ofcourse, this ability will be very strong with mylor and owster... Which makes me wonder, it might be a very rare ability (maybe one only given to a summoner?).

The forcefield ability will make a monster only take 1 damage from 5+ power attacks.

I'm not too sure if I'm really happy with this ability. My main reason is that it might create these weird situations where you actually want to keep monsters at a lower level in certain cases (Some people might think this is part of strategy, but for me it feels like more like a flaw.) or that 4 power monsters will be more desirable than "stronger" ones...

They might one day make it possible to select the specific version of a card (for example if you have a level 2 and a level 1 sandworm that you have the option to select both card), but I haven't heard any mention of it yet.

Once again, we will have to see how many cards will actually have this ability before we can speculate about the impact. It still feels like a gamble to rely too much on this ability so I doubt that the impact will be that huge.

The camouflage ability will make your monsters untargetable if they are not in first position.

Be careful with the word "targeted" snipe and sneak attacks counts as targeted attacks, but opportunity does not.

At first glance I would not think that this ability would have a huge impact on the game. I guess it will be comparable to an ability like shatter.

Last but not least, the deathblow ability.

The first thing I thought? Nice, this is how they want to counter Lama+Kron, I like it.

Once again, we will have to see how common this strategy is before we declare the Lame+Kron combo dead. In fact, I don't think it will die, but it is definitely nerfed (at least a bit) by this ability.

I hope that this is not only found on very expensive legendary monsters because than the impact on the inbalance would be very low, but I trust the splinterlands team to balance everything out.

Although this ability was definitely created with Lama+Kron in mind, it does impact other monsters and strategies aswell. For starters, this is bad news for all monsters with the last stand ability + for any lama lineup. On the other hand, it's bad for strategies where you rely on that last huge monster to kill the entire enemy team (like byzantine kitty + flesh gollem or cube or something like that).

However, having an additional counter does not mean that your cards will become useless. For example, last stand creatures are also countered by the sneak ability, but no one would call last stand a useless ability right? That's it, the 4 new splinterlands abilities!
The impact of these strategies on the game will depend a lot on how many cards will have these abilities and what cards will come with the chaos legion set.

However, it's clear that the splinterlands team had some overpowered combinations in mind when they came up with this stuff. Which is a really good thing because I was starting to get a bit worried that inbalance might be very bad for splinterlands gameplay.

All in all, I'm a happy splinterlands player after reading about these abilities.