When you are new to splinterlands it might be difficult to come up with some decent low level strategies. The "Bronze strategies" series aims to help new players out with coming up with good strategies resulting in higher win rates.

In this post we will cover the fire splinter, with Malric Inferno as the summoner. 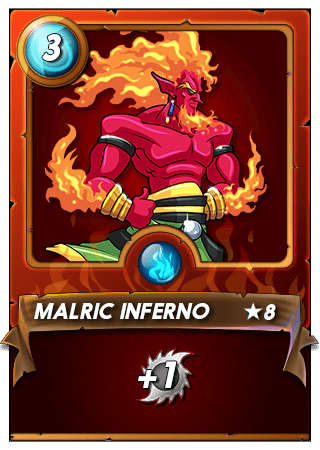 I have always been drawn towards fire, even when Malric was not free to play, I used Pyre. Even with Pyre, I felt like fire was pretty strong, but when I started using Malric, I realized this is where the real money is. That being said, you don't just win by using a certain summoner, you still need to apply a good strategy, so let me help you out!

I might not be a top player in bronze league (yet), but I do get some pretty good results with this strat, as you can see from my season summary. Also, I was using a level one Malric in this season, with mainly f2p cards, I have since upgraded him to level 2 and I'm working on leveling up some fire cards, which will only increase my success with him.

One of the first things you should realize is when you should use which splinter/summoner. The good thing is that in bronze, Malric is often a good choice!

There are some situations where you might want to consider alternatives, for example if it's a battle with earthquake and you have good flying creatures in other splinters you might want to pick that splinter over fire. Also, adding armor is usually a better summoner ability than adding damage in case of earthquake. That being said, this is still situational and depending on what cards you have. In this case, living lava + giant roc + imp bowman for example would still make a pretty strong earthquake team.

I will not cover every single situation when it comes to what conditions are applied on the battlefield, the more u use this strategy, the more u will get a feel for when to use Malric.

Overall, Malric is really good in both low level mana fights and high level mana fights. However, you might consider using Pyre over Malric in certain situations. For example when you have a low level mana battle and you are using living lava and serpentine spy, Pyre would actually be better than Malric in a mirror match. Especially when you see that your opponent uses fire as his main splinter, you should use Pyre instead of Malric in a situations like this. Once again, the more u use the strat, the more you will get the feel for it.

The basic strategy is really simple. Malric adds +1 damage to every melee monster, so we want to use as many melee monsters as possible. Using a lot of small mana melee creatures that can attack when they are not in first position is the way to go. Now, since these cards will be pretty squishy it's important to have a good tank as your first creature, living lava is an obvious pick here. Also, protecting the back with a chicken in last position seems to work pretty well for me in most battles.

Let's try to limit the "core cards" to 3 free 2 play cards, this guarantees that everybody can get started with the strategy, even when you haven't even earned/bought a single card yet.

The number one spot is for: Living lava 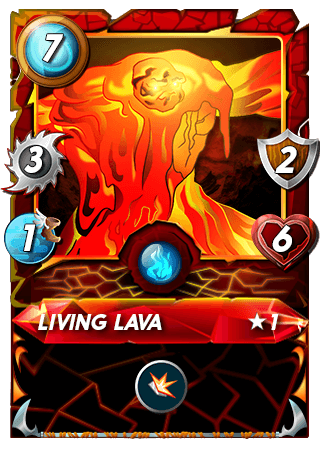 This beast is a great frontline tank because of the shield ability - which reduces the damage taken from melee and ranged attack. It will take quite a few attacks before he will go down, giving your other creatures time to get enough attacks in to win the game (hopefully). Obviously, magic attacks are really strong against living lava, and magic kind off counters this strategy. Especially when they are using Alric Stormbringer, which is also a free to play summoner. That being said, alric is currently only used in 7-8% of the games in bronze league.

The number 2 spot is for: Kobold miner 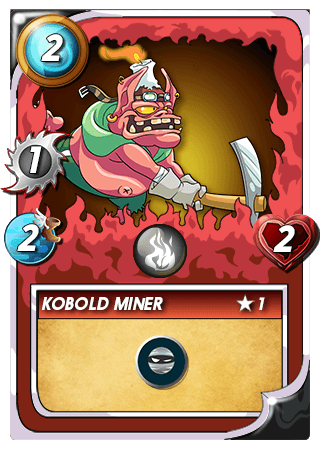 This little guy only costs 2 mana and has 1 damage (which will be 2 when using malric), 2 health and the sneak ability. This is an absolute beast in this strategy because it provides a lot of value for a very small cost.

Last but not least: Serpentine spy Antoher low mana monster that deals some serious damage. Also, it can attack from any position because it has the opportunity ability. The downside is obviously the low health, the trick is to try and put him in a position where he doesn't take any damage. Usually this means not in first or second position and also not in last position. This won't always be an option, but it's a good rule to apply when possible.

So we have covered the 3 most important cards, but these alone will obviously not get you very far. Let's take a look at some great additions to the team. Furious Chicken obviously gets a spot when there is room for it, and ocasionally Creeping Ooze also enters the stage.

First, you should get a good melee creature with reach. When there is enough mana this will always be my creature in second place. It will function as a second "tank" and as an additional damage dealer. I like Fineas Rage for higher mana battles and Grumpy Dwarf as a lower mana alternative. Grumpy dwarf might not seem very good, but he's pretty cheap, so it's very easy to get him upgraded to level 3. Giant Roc is great when battling in an earthquake battle.

Cerberus might replace living lava as the first position tank in low mana fights. It also usually gets a spot when there is a battle condition where melee creatures can attack from any position. In fact, I like cerberus as a last position creature because it can usually permanently absorb sneak damage (but this is always a bit of a gamble of course). It's definetly a really strong card, but it would also cost quite a bit if you would like to level him.

Another option I really like is a card that is pretty rarely used in any league (somewhere in between 0,5%-2%), but I really like it with this strategy. It's the Ant Miners. It's a cheap card with the scavenge ability, and this ability is good with this strategy because a lot of low health high damage creatures means that a lot of creatures die. Which result in this card being pretty valuable in a lot of the games. Just make sure to put it in a pretty safe postion, so it gets the chance to become pretty big. Also malric buffing this little guy to 2 damage is pretty important, this means the ant sometimes grows to a  2/10 creature, for only 2 mana, pretty awesome. The best thing is that it's also a really cheap card, so I just went ahead and got me a gold foil Ant Miners.

These are the cards that I use most often as you can see:

But feel free to experiment with other options. Also, depending on the battle conditions I might include cards like Pit Ogre, Serpentine Soldier, sometimes Goblin Shaman is pretty good even a kobold bruisers is included from time to time. Don't feel limited, but think of these cards as safe go-to options within this strategy.

Okay, this is very important, but also pretty obvious in most situations, so I will not write too much about this topic.

You want your main tank (Living lava most of the time) to be in the first position.

The second position is reserved for your moster of choice with the reach ability, if the mana allows it.

Serpentine spy and ant miners take positions where they are usually pretty safe.

Kobold miner can fill any other spot.

Furious chicken can be right after your reach creature or in the last position.

There can maybe be discussion about changing up position 2,3 & 4, but this is definitely not a terrible setup.

Malric is a really good option in bronze league when you apply this strategy. You can start completely with free to play cards and buy/upgrade cards as you get better.

You might be aware of magic being somewhat of a counter and also summoners that provide shields can sometimes be tricky. However, if you apply this strategy correctly you should be able to reach a +60% win rate in bronze without too much difficulties.

Defintetly share your opinion about my guide if you disagree or have great additions to this strat.