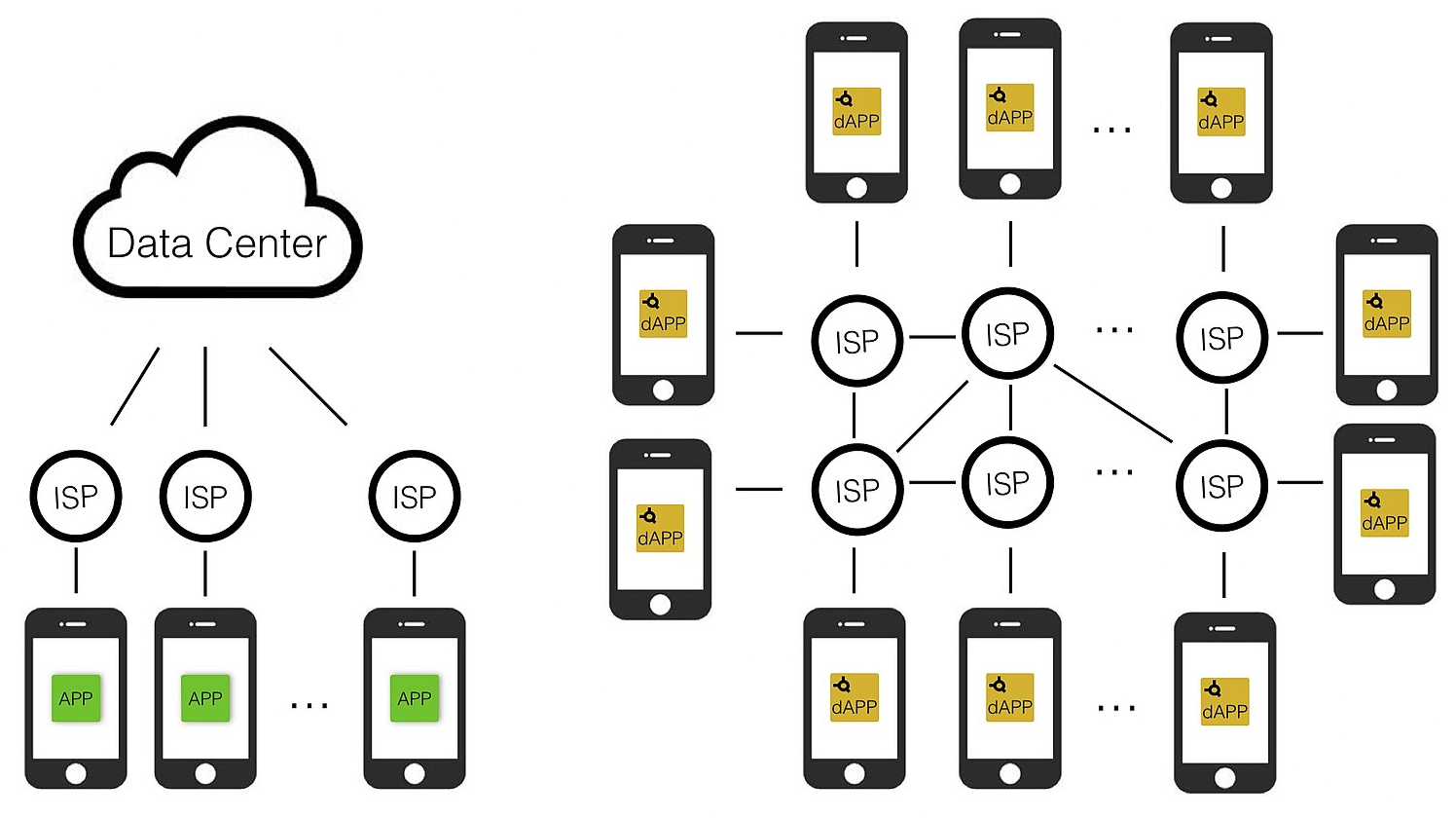 DApps - the Future of the Internet

This new world has created (more) a new concept: DApps - decentralized applications. They are software applications that are open source and work autonomously and directly between users that must be rewarded.

Your users must be rewarded through the allocation of cryptotokens to keep the network and the application running.

Thus, it is possible to attract more users to become network nodes, ensuring decentralization. This decentralization allows them not to be dependent on a single point of failure while maintaining application security. It also makes DApps resistant to censorship since there is no central entity that can make changes to the records.

This entity is replaced by smart contracts that manage the entire application, ensuring that the system is autonomous. Smart contracts must be open source so that there is public scrutiny and everyone knows what is really happening in the application.

Following the aforementioned characteristics we realized that the first DApp that used the blockchain was Bitcoin itself. But, to repeat the feat, it would be necessary to create new blockchains for each application. Ethereum came to solve this problem.

Ethereum's great innovation is to function as a platform where new applications can be created that use the existing infrastructure and build the next wave of applications that will have a disruptive effect on the economy and the world as we know it.

As we are in the embryonic phase of this technology, what we can see are, mainly, the foundations to be built. This is what Ethereum and other similar assets, such as HIVE, NEO, EOS or Cardano, intend to be. These, inspired by Ethereum's achievements, are creating platforms for DApps. It is these cryptoactives that are building the foundations on which to build decentralized applications that will dominate the future of the internet.

If we take as an example the sharing economy, acclaimed by companies like Uber or Airbnb, where owners adhere to platforms that allow them to use their assets and make them profitable. A similar DApp allows owners to dramatically reduce the commissions they have to pay to the platform to gain access to customers. From the current 20% to 30% for companies, that rate can be reduced by 10 times, to 2% to 3% to keep networks on the blockchain.

DApps will appear that will reach platforms that have become giants. Without a central entity, a company, which has to seek profit, the cost of entry will be null and the trust earned through the services provided to its users. New users will be won by the most competitive prices that can be borne by the owners due to the more profitable margins they can have on these new platforms, thus creating the effects that a network of this kind needs to be useful and functional.

We were able to consult all existing DApps at www.stateofthedapps.com

We can better understand the differences between current and decentralized applications through the figure above. Although the interface for the end user may be similar, what is behind ensuring the operation of that application is different. Instead of having a central server that controls all the operations of that application, in DApps there are service nodes in different regions that ensure all operations in the application. These nodes can connect and disconnect from the network in whatever way is most convenient for them, and will be rewarded for their work. Currently, in centralized applications there is a central database where all the necessary information is stored so that the application can be executed, as well as much information from users. In a DApp, this information is registered in a decentralized blockchain that is not controlled by a single entity. This allows users to have more control over their information, as they can provide only the data strictly necessary to carry out the operations they want in the application.

One of the most famous initial DApps was DAO - Autonomous Decentralized Organization - which was programmed to function as a decentralized venture capital fund supported by the Ethereum network. Holders of the DAO cryptotoken would be able to vote on the projects they wanted to support. If there was sufficient support for that project, the project's entrepreneurs would receive the necessary funds to proceed with their project. After a while, investors would be rewarded with dividends or the services provided by the project. The advantage would be to have all bureaucratic and time-consuming approval and release of funds processes automated through smart contracts written by DAO programmers.

DAO generated a lot of interest and enthusiasm, raising over $ 168 million in a crowdfunding process similar to Ethereum, and became the largest crowdfunding event in history. As a cryptotoken supported by the Ethereum network, funds were raised in ether - the network's native asset - which meant 11.5 million ether, 15% of the ether created to date.

However, there were some latent concerns in the Ethereum community. The DAO code was scrupulously examined, and vulnerabilities were identified that could “allow attacks with serious consequences” for the Ethereum network. Due to these problems, a postponement of the project launch was requested so that they could be corrected.

In June 2016, three weeks after its launch, a hacker managed to break the DAO network and steal a third of the ether raised, about 3.6 million ether. The DAO code is public, as it is on the Ethereum blockchain, as are those of all DApps that use this support network. So it had to be perfect and flawless to allow attacks of this nature, especially considering the funds raised that made a successful attack very profitable. Despite the warnings, the code has not been revised and the project that had become a showcase for Ethereum's possibilities has become a failure.