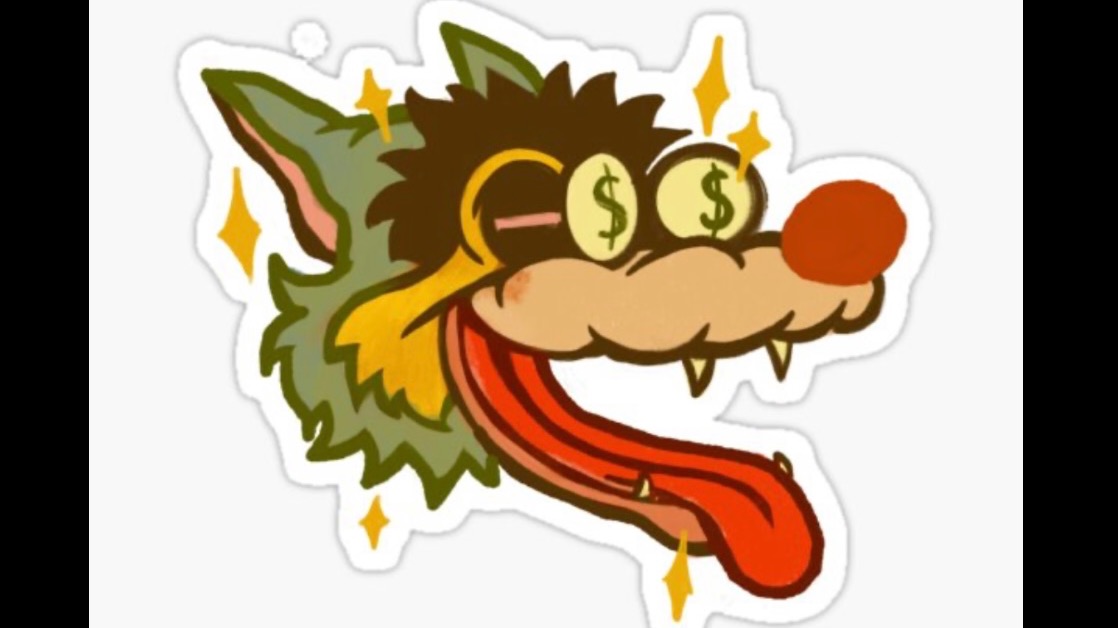 This morning’s cryptonews roundup has presented me with yet another story of some crypto company I’ve never heard of becoming “spendable” through a method that has already been mainstreamed by a major traditional company:

Who the heck is Bakkt? Are they a major exchange? Is this a name I’m too new to the cryptoverse to be familiar with? They must have some heft to have gotten Google’s attention, right? Or perhaps they are a small company operated by someone who Google’s people want to see succeed? Or are they being strong-armed into this?

I don’t know, but it almost doesn’t matter because that’s not truly what I’m here for, so for the moment let’s set that aside, and go on a fairy-tale journey, shall we?

Choose Your Own Adventure

Note: what follows will be a brief overview written from a US perspective because that’s the only one I’m familiar with. It is highly likely to be wildly historically inaccurate.

Imagine a world in which little pigs must build their own homes, or risk being eaten by the Big Bad Wolf.

The ancestors of these piggies have spent time immemorial being raised & herded as snacks for all kinds of predator-overlords, and especially lions, because for some reason there seem to be a lot of lions in the heraldry of countries where lions don’t actually live. 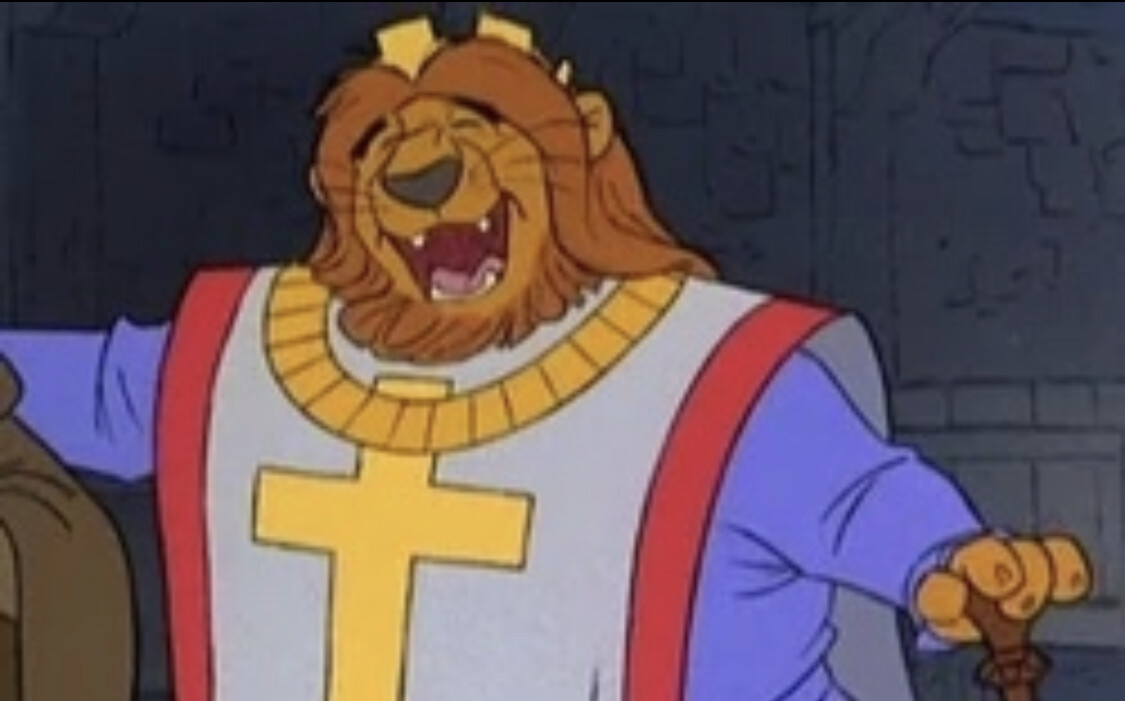 The predators “gifted” them straw to make houses, so they’d be safe from the rain and whatnot, and promised to “protect” the pigs in exchange for fealty. The pigs saw little choice but to go along with it, being that they were so damn juicy. But a straw house won’t protect you from the whims of a lion.

Over time, the pigs grow tired of being treated like livestock, and decide that they will establish a new land where they will look out for themselves and (hopefully) not get eaten.

Is it a perfect place? No. Do they have growing pains? Definitely. But did they escape the tyranny? Lol no, not by a long shot, running away doesn’t solve your problems.

Turns out the new place has wolves, and though the social hierarchy of wolves is more competitive and less cooperative, they are still viciously efficient at gobbling up the little pigs. In fact, though the pigs get better and better at building houses out of things that will last, the number of pigs who can afford to build resilient housing declines steadily.

Those that can afford to do so start building with sticks instead of straw. After all, straw was the currency of the oppressor, and sticks is backed by gold and the reserve currency of the world, don’tcha know. The wolves can still shred the f—k out of your hide from a stick house, but whatever, having a s—tpile of sticks makes me feel safe, ok?

As the pigs get better at engineering stick houses, the wolves get better at giving them other uses for their sticks so that they have fewer to build with. The pigs now have fences! And fishing poles! And Stick Media where you can instantly turn your stick into whatever you see on the stickternet! Everywhere you go, anything you want, you can buy it with sticks! It’s so convenient, the pigs barely realize that they have been giving their sticks to the wolves all along.

Not to put too fine a point on it, but in the 2018 Mary Poppins film Colin Firth plays a literal banker who is literally trying to take the family’s house, and for part of the film he literally turns into a literal wolf, and makes this face the moment her back is turned: 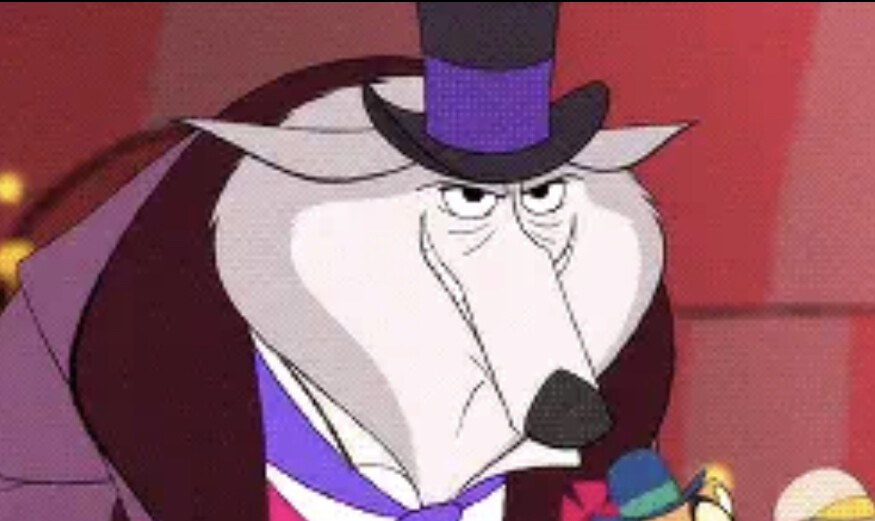 Then one day a clever piglet named Sa-ton-shi designs The Brick! Pigs don’t need to play the stick game with the wolves, they can build a sturdy, reliable house for themselves and their future generations out of bricks! And the best part is, any pig can make bricks from mud, you don’t need to buy it from a wolf.

The wolves snigger, “that’ll never catch on. You still need sticks for everything else.”

”Oh yeah,” say the pigs, realization dawning. “I guess we could make fences out of wire, and fishing poles out of fiberglass…”

The wolves bluster, “well, WE won’t be trading you any sticks for wire or fiberglass!” 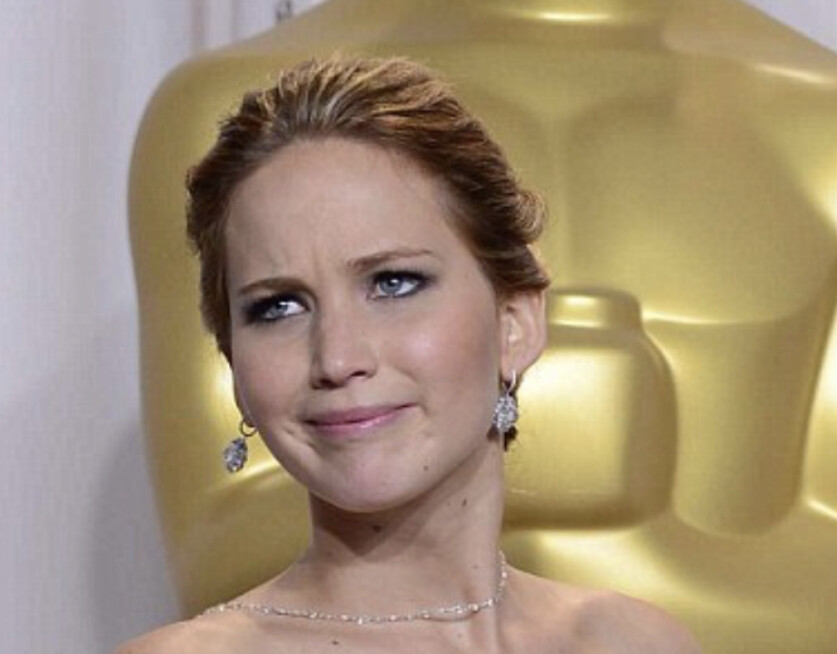 Slowly the wolves come to realize they have lost control of this whole business of “alternative” resources, and that they simply must find a way to get ahead of it. If they don’t, they’ll lose the ability to make themselves fat off the labor of tastey piglets.

The wolves howl and howl about how the brick doesn’t fit into the stick economy, and try to make laws against having bricks (for your own protection, of course), and do everything they can to dissuade pigs from moving from sticks to bricks. The danger for them is twofold here: not only can a wolf not break into a brick house to consume individual pigs, but if everybody is switching to bricks and wire and fiberglass it will completely devalue the absolute forest of sticks they have been stockpiling over the years. Then how will they convince the pigs to hand over their lives in the pursuit of sticks??

Some offer a type of brick that is a bundle of sticks and call it a “stable-brick.”

Some let you get small brick benefits for using sticks to pay for things.

Some try taxing the use of bricks, but the feasibility of this is terrible: how are you going to collect sticks for something that pigs can make out of mud?

Some try to say that bricks are ruining the planet. But as the pigs point out, bricks are made by sunlight, and don’t contribute to deforestation like sticks do.

In some other countries where they were importing sticks, the wolves realize the power of the brick, and decide that they like how sturdy it makes their houses too, so they start to switch to a brick-based economy.

The more ways they try to blow down the brick houses, the more obvious their robustness becomes.

So some wolves decide that their best shot at keeping the advantage is by cornering the market on both sticks AND bricks, and the way they’ll do that is by stockpiling bricks in the same way they did sticks.

So they set up a “service” for the pigs:

”Since you can’t currently spend your bricks in any of the places where you’re addicted to using sticks, we’ll do you a big ol’ favor. Using our StickPay service, you can acquire goods in trade for bricks. We’ll take your bricks, convert them to sticks, and pay the vendor in sticks, so everyone is happy.”

And then everyone clapped.

Here’s how I see it:

By integrating the “conversion” of crypto into major prominent financial services such as Google Pay (or PayPal, or Visa), majorly powerful companies such as Google (or PayPal, or Visa) get to set the value of crypto (in a literal sense, as well as a metaphorical sense; who determines how much of a currency will translate to $1, you the individual, or google’s algorithm?)

When they use a word like “convert” we think of our crypto-to-crypto transactions like trading FARM for AMPL, and we go “oh, that’s nice” and see this as a net win.

After all, now I can buy my sneakers with DOGE, right? I should be thrilled?

The illusion of “mass adoption” from ease of use aside, the word “convert” really means that they are buying your crypto from you every time you make a purchase. They have built an empire in being the middleman, and they’re not going to stop now.

This won’t promote mass adoption because the masses who pay in fiat will continue to pay in fiat, completely ignorant of and unaffected by this change. And the people who would like to be navigating the world in crypto will be willingly handing that future over in exchange for fiat (at a rate set by the “service”).

To me, this headline doesn’t say “Google Makes Crypto a Currency Again,” it says “Google is taking crypto off the table and putting it in a vault.”

The extreme future scenario here is not one in which each individual can directly pay a vendor in crypto because everybody has moved away from fiat. It is one in which large institutions like Google— and not individuals— hold ALL of the coins, and vendors never move toward accepting alternative currencies, because they have never needed to.

Is that really something we should be celebrating?

Well, I mean… bricks can be made from mud and sunlight, right? The amount of Bitcoin that will ever be in the world is capped, but I don’t foresee the crypto community ever giving up on the creation of altcoins…

If you’re looking for good free crypto, check out my favorites and faucets. 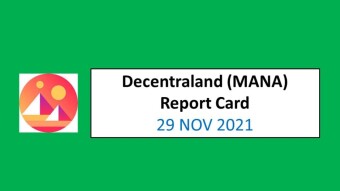 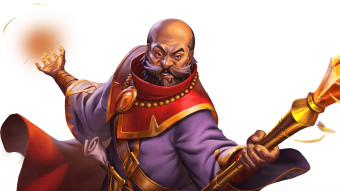