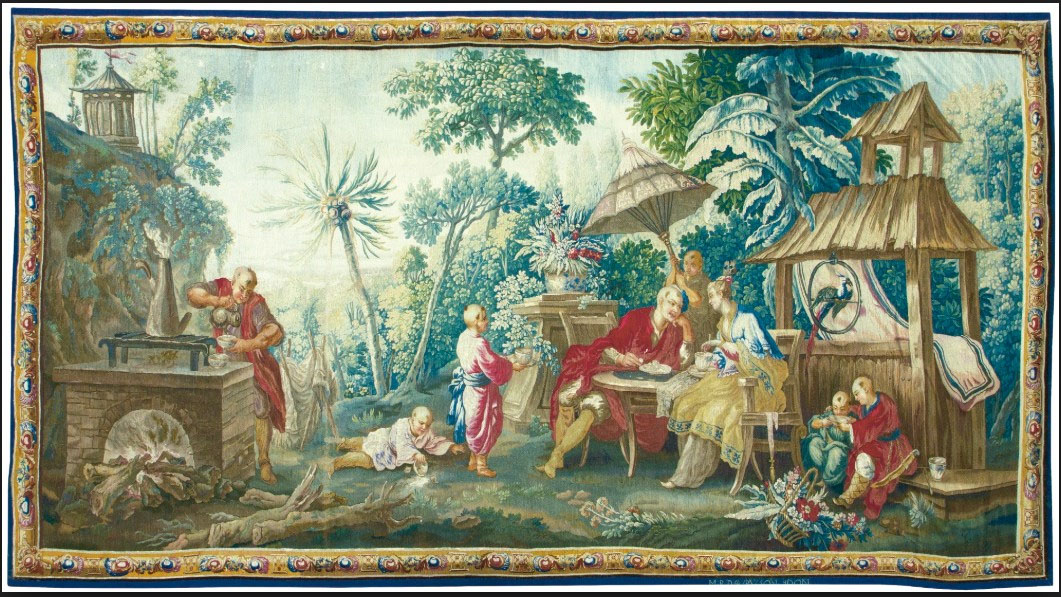 The side effect ( Part 3 The Gobelin)

“Who is she?” Bernard asked old Carver. It has been only three days since he returned home from the prestigious university, where he spent four years. He arrived a week ahead of time, although he did not understand why.

Carver served for many years in the Montesquieu mansion, since the time when Bernard's father Augustus was a young man.

“She is so beautiful!” Bernard mattered. “What eyes, what skin! What is her name?”

"Does the young master want me to send her to your quarters, let’s say on Monday?"

"No, no, Carver, I'll try to meet her myself. “How beautiful,” he kept on saying to himself.

He met her when she passed by the library - with a basket of clothes.

"Yes, your lordship," Abigail didn't raise her eyes off the basket.

"When did you start working here?"

"A week ago, Your Grace. I haven't seen you here either." This time Abigail looked up.

“I just came from Poitiers. I graduated a university there,” he said nonchalantly.

“But we were expecting you next week, Your Grace.”

“It's true. I was supposed to. I don’t even know what pushed me to come earlier. Maybe it’s destiny to meet with you”.

“Probably, missed their homeland, your lordship.”

"Please don't call me, ‘your lordship,’ this keeps us at such a distance. My name is Bernard. And what is yours? Wait. Let me guess," Bernard frowned as if concentrating hard, "Your name is… your name is Abigail…" he said in a theatrical voice.
Bernard thought Abigail would be surprised. Instead, she looked at him with interest, sadness and some sort of fatigue.
“Do you really like me?”
“Really like you? I'm crazy about you, baby!” Abigail continued looking intently into the eyes of the young baron. “You are handsome.”
Bernard smiled happily.

In response, Abigail bit her lip and a tear rolled out of her left eye. Bernard was very surprised and this moved him.

“Why tears?” Bernard lightly touched her cheek and wiped away a tear. “Who offended my little girl?” In his mind, he already owned her. “Tell me and I will punish him or her.”

Instead of answering, Abigail smiled and sniffed.

“You seem kind” She again looked at him with the same long and appraising look.

“Thank you, my sweetness. Tell me, why you are sad? What saddens you? Who offended you?

Instead of answering, Abigail pressed a finger to his lips.

“Thursday?” Bernard looked puzzled. “Are you upset with Thursdays? Is this a popular belief in the village?” He lifted her face so that their eyes were almost at the same level, and seeing her swollen lips so close, could not hold himself from gently kissing them. Abigail did not respond but continued to look at Bernard seriously and appreciatively. Suddenly she nodded as if she decided something for herself ... “Let's go.”
“Where to, my sweetness?” the determination of the girl surprised him. “To your quarters.”
“Right now I need to do something in the library. My father asked me. But tomorrow…”
Abigail's face went pale. “Tomorrow? Tomorrow there will be no tomorrow. Now.” Her voice was both determined and sad. Bernard thought it was strange, but something in him pushed him to resolve. “Come on” he grabbed her arm. She covered his hand with her “Tell me, will you be gentle?”
Bernard's heartbeat happily.

“Of course, sweetheart.” He kissed her again as gentle as possible. This time she answered. Bernard pulled her to the library.

In the library, in the dim light of a single candle, they kissed for a long time. Dark shelves of books along the walls of the library from the floor to the high ceiling stood like giant guards of their nascent feeling. Through the windows of the second floor, one could see a black sky with stars poured on it. The clock in the village church struck ten. Gentle at first, their kisses gained firmness and their bodies locked in passionate embrace.

The library had a hardwood floor. Bernard took a quick look around and noticed a large square piece of material on the wall. Immediately he tore it down, spread it on the floor over the linen, which he dumped from her basket, and carefully lowered Abigail down onto it. Gently caressing each other, they undressed and their bodies melted together in mutual desire.

The human sexual act is monotonous. Michelangelo even called it "ugly." According to him, God sends a temporary madness to people during the act so they may not notice its ugliness.

Not to disrespect the opinion of the great sculptor, though Bernard and Abigail, both in the first blossom of their youth, even in the dark setting of the library, looked beautiful.

Both were inexperienced and, so, a little clumsy and careless about their love noises. The raw power of their lovemaking - their passionate chatter and moans of pleasure - leaked out from under the library door, and several servants approached the door on their tiptoes, grinning and giggling softly. One ran to report the incident to Sir Augustus.
When the young people lay on the floor in their arms, still full of tenderness, the library door suddenly opened and the old baron entered as quickly as his sick leg would allow. Jumping up, Abigail screamed, grabbed her dress and covered her nakedness. Bernard, taken by surprise, could not say a word.

“You,” the old baron Abigail shouted, and pointing at the door with the candlestick in his hand, carrying four burning candles, “get out!”

Covering as best she could, Abigail quickly ran out of the library, accompanied by mocking and whistles of servants.

“Now all get out!” the old baron snorted angrily. The servants crowded away, discussing and giggling when he slammed the door.

“Young man,” Augustus Montesquieu said coldly, but energetically “Get dressed and march into your room!”

While Bernard was dressing, not so quickly and dexterously as he wished, the old baron approached the place where the young lovers lay. Worried, he brought the candles closer to the floor and examined the fabric spread out on the floor. His expression became angry.

“You ... you are the shame of this family!” he snapped in disgust, pointing to the floor.

“Sorry, papa,” Bernard said in a trembling voice, “but haven't you been young and passionate?”

"What?" exclaimed Augustus, with his full-face becoming redder and redder, "Do you think I am mad at you because you slept with the servant?"

Bernard, perplexed, could only open his mouth.

"Do you know, you idiot, what you’ve done your dirty fornicating on?"

Bernard who still wasn't in full possession of his voice stammered: "The rug, father."

“The ‘RUG’? The ‘RUG’?” screamed Augustus at the top of his lungs. “This is a fifteenth-century, hand-crafted Gobelin, from the Beauvais! It used to hang in Versailles during the reign of Henry of Navarre! I paid a thousand pistoles for it at auction! Get out of my sight, you nincompoop!"

“You do not know? Sir! After all, this is a French word!” He shook his head as if in disbelief of what was happening. “What did they teach you this damned Poitiers?”

Bernard was silent, hanging his head.

“Get out of here,” Augustus spat in disgust and turned away. “And for Christ's sake, sir, take a bath and sprinkle some perfume on yourself before you go down for supper. You smell like a peasant.” He turned his head away from Bernard and squeezed his nostrils in a gesture of ostentatious disgust.

After Bernard left, trembling, Augustus slowly kneeled to examine the sad, crumpled remains of his famous “Emperor of China” tapestry. The good Emperor and his fair ladies, once proud and jovial at a sunny table, glowered up at him through their stiffening veil of drying stains, mutely bemoaning their spoiled picnic, protesting that they, now, probably smelled like peasants, too.

“Oh, my Lord, oh, my Lord,” Augustus muttered as he caressed the defiled gobelin, lovingly, tears streaming down his war-torn cheeks, “Oh, my Lord – you gave my son a dick, why not brains? This idiot not only spoiled my favorite tapestry, but also the maid. Now she’s completely useless.” He screamed, “Carver, Carver!” An old servant appeared.

“How can I serve your lordship?”

“I tell you what, Carver. Send this Abigail home – she’s no longer useful to my cause if you know what I mean.” He chuckled. “Make sure to send me another one, prettier, younger, and what’s more importantly, make sure she’s virgin. I have no tolerance for second-hand things.”

“Of course, your lordship.”

“Hurry up, then. Tomorrow is Friday.”