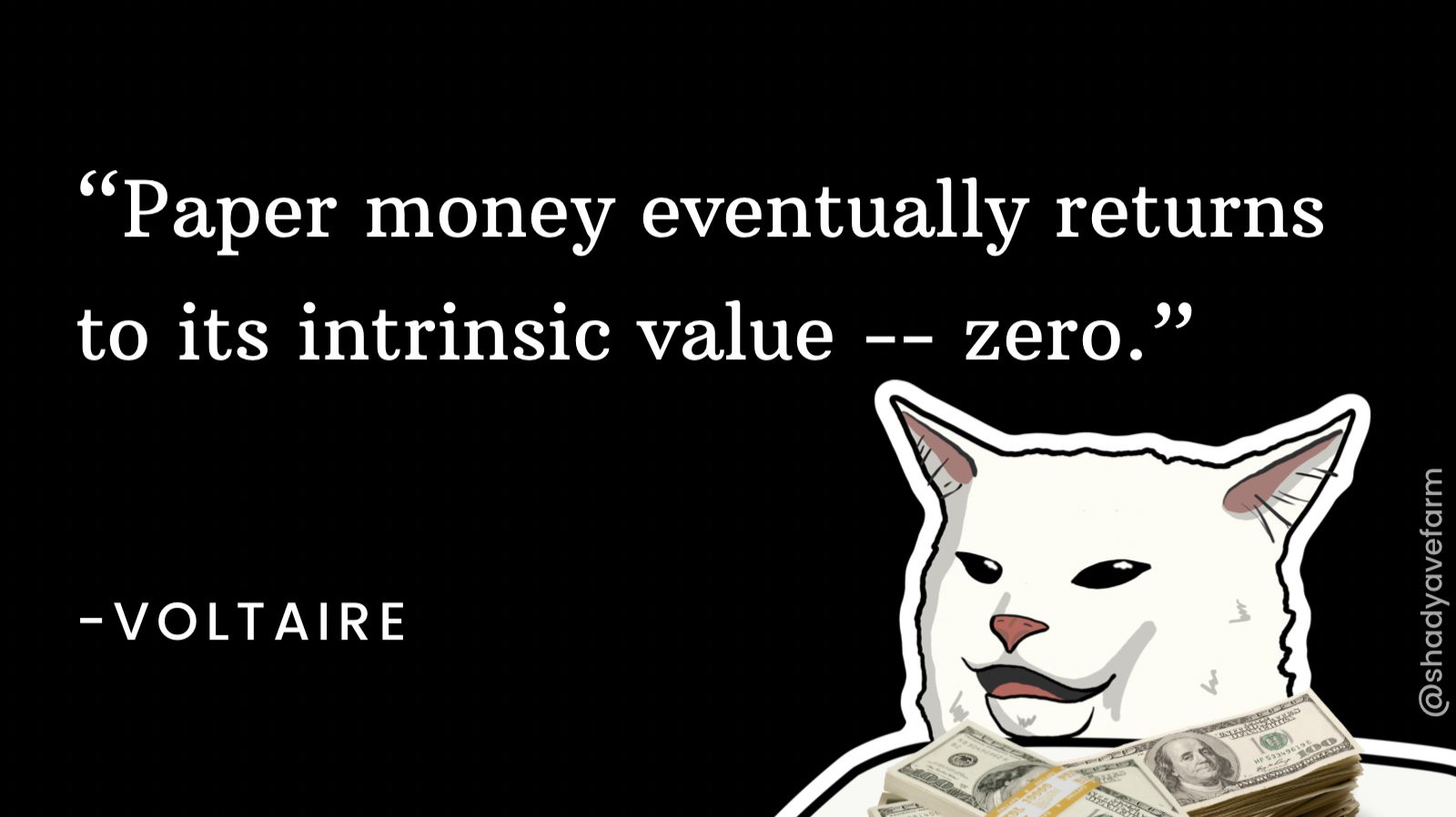 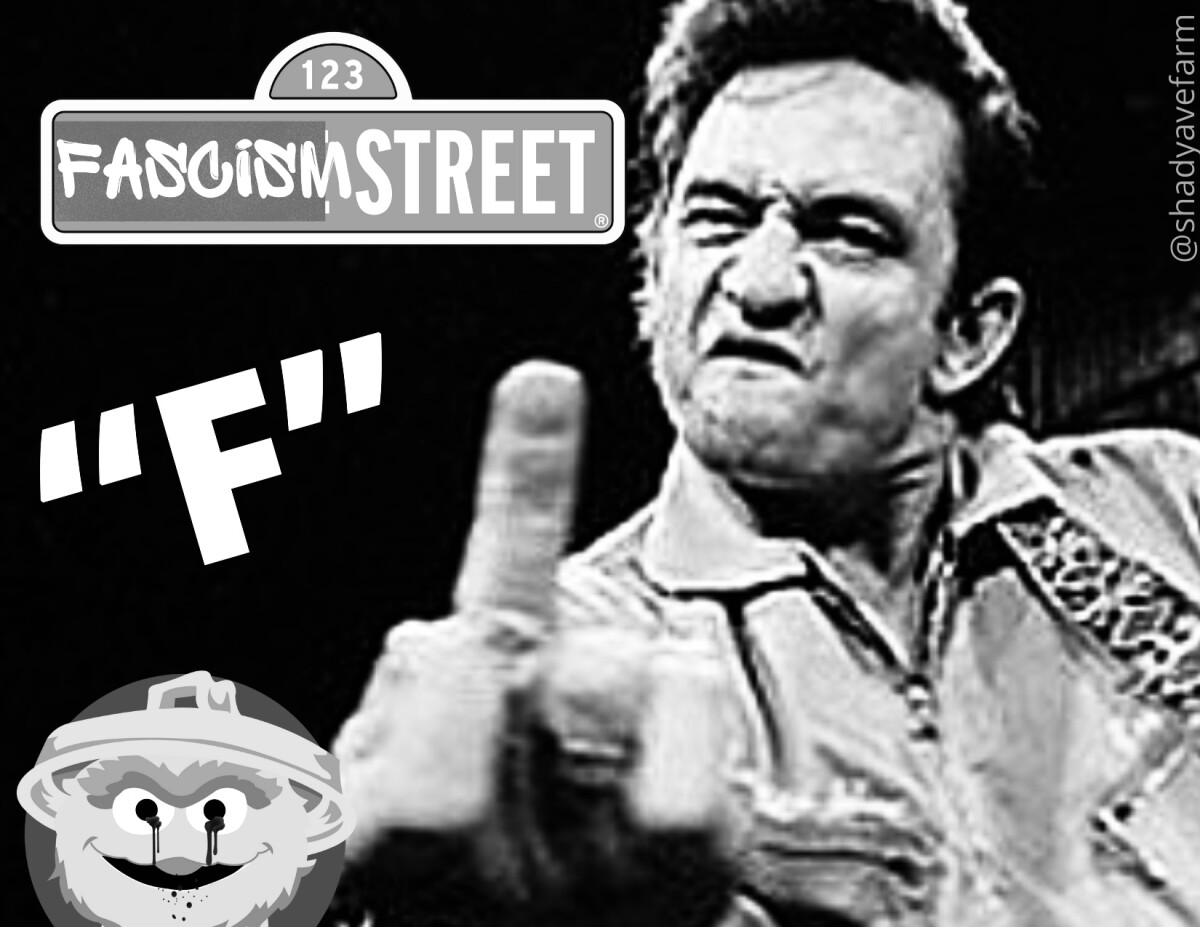 You Don't Even Know What The "F" Word Means!

One of the things that repressive totalitarian regimes do is "water down" or dilute the language by changing the meaning of words as to confuse the people and obfuscate the reality of the situation. This sort of absolute fuckery has been going on with the English language here the in the United States for quite some time and the example I'm going to give you is one that I have been aware of and has been making my blood boil for almost two decades since I discovered it. From David McGowan's seminal work, "Understanding the F-Word: American Fascism and the Politics of Illusion," published in 2001:

The first step towards understanding what we are as a nation (though not as a people), and what we stand for, is to clearly define exactly what fascism is. To do so, I can think of no better authority to turn to than the Webster's New World Dictionary, apparently the self-proclaimed wordsmiths of the New World Order, which offers the following definition:

It should be readily apparent that some aspects of this definition, most notably the notion of private economic enterprise, bear an uncomfortable similarity to the American 'democratic' system. Luckily, though, the people at Webster's realize that changing times sometimes require changing definitions.

In truth, the definition above is not the current one offered by Webster's, but is taken from an ancient 1980 edition of the New World Dictionary, hardly relevant to today's modern world. A more recent variation, taken from the 1990 edition, shows that a not-so-subtle change has occurred in the definition of, if not the practice of, fascism:

Gone now is that whole unpleasantness about private economic enterprise that might have, perhaps, struck a little too close to home. So we can all sleep well knowing that even as the country creeps closer to overt fascism, Webster's will thoughtfully rewrite the dictionary so that we may maintain a comfortable distance between ourselves and the dreaded f-word..

At this juncture in American history you can plainly see we are - and have been for a great while - on the dark path to fully-realized capital "F" fascism from the mass incarceration of U.S. citizens being used as slave labor in the privatized, for-profit prison system to ham-fisted and brutally repressive censorship that pervades our national news media. Giovanni Amendola, Italian journalist and politician who was a proponent of fierce opposition to Mussolini (not to be confused with Giovanni Gentile, a prominent Italian philosopher who was president of the Royal Academy of Italy and cheerleader for Italian fascism), describes the all-consuming nature of this particular brand of totalitarianism in La democrazia italiano contro il fascismo (Italian democracy against fascism):

"... fascism did not so much aim to govern Italy as to monopolize the control of Italian consciences. The possession of power is not enough for fascism: it needs to possess the private conscience of all its citizens, it demands the "conversion" of Italians. Fascism makes the same claims as a religion ... It does not promise happiness to those who convert."

Whenever I read that the current brand of groupthink that we condescendingly refer to as "Woke-isim" immediately comes to mind, especially in relation to the joined-at-the-hip unholy marriage of "Big Tech" censorship and autocratic "Big Government" that has become the brand of despotic, autocratic corporation known as the United States of America. 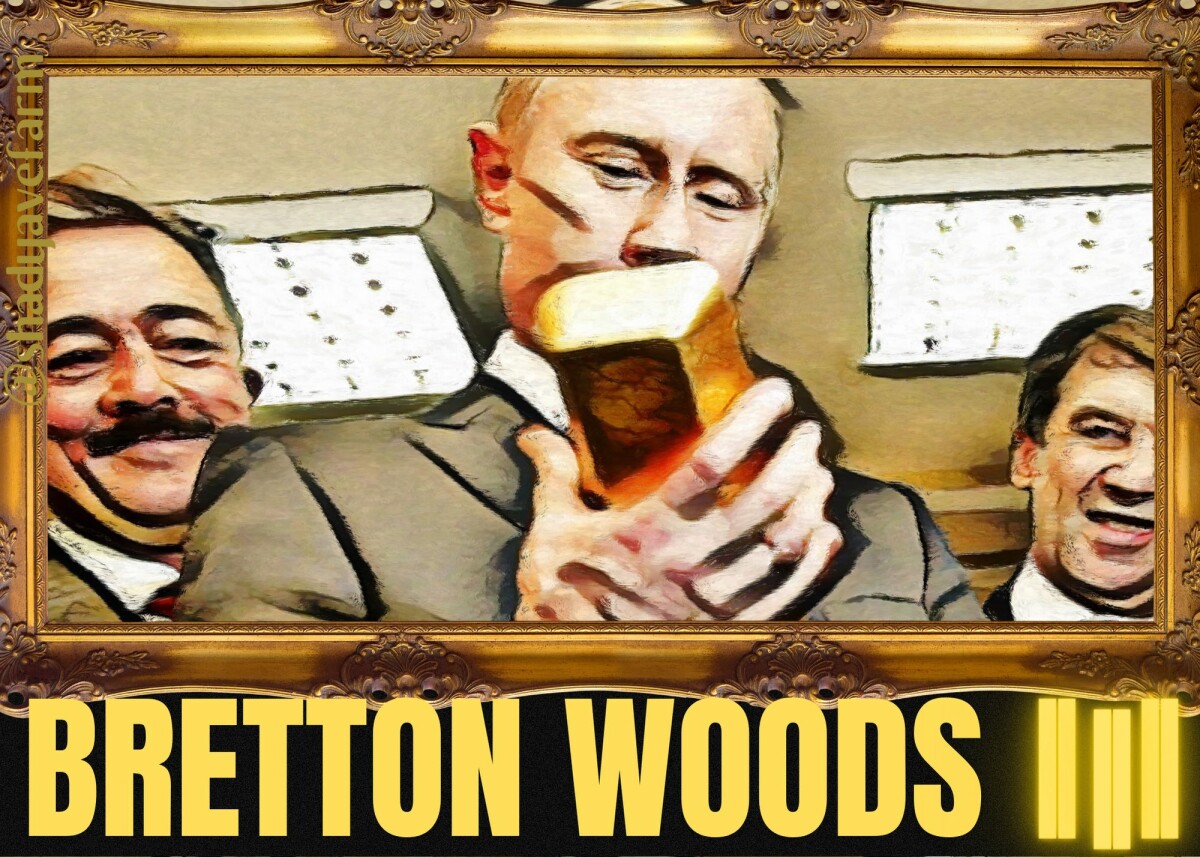 You Don't Mess With The Zoltan!

Most Americans are blissfully unaware of the radical changes taking place on the world stage relative to the revolution occurring in the monetary world order (and will probably stay in this state of ignorance until the shelves are empty) as the transition from pure financialization (the petrodollar) to a commodities-based system where physical assets of usefulness and importance such as gold, oil, wheat - and yes, Bitcoin - will take center stage. The United States has destroyed its hegemonic dominance in an attempt to bring Russia to heel with yet another round of sanctions and outright theft of hundreds of millions of dollars owned by the Russian central bank within the system. Zoltan Pozsar, an analyst at Credit Suisse and during the Great Financial Crisis of 2008 served at the Federal Reserve Bank of New York in charge of market intelligence for securitized credit markets and was the point person on market developments for senior Federal Reserve Board, US Treasury and White House officials throughout the crisis, writes in his report for the Investment Strategy Department of Credit Suisse on March 7th, 2022 titled Bretton Woods III:

We are witnessing the birth of Bretton Woods III – a new world (monetary) order centered around commodity-based currencies in the East that will likely weaken the Eurodollar system and also contribute to inflationary forces in the West.

A crisis is unfolding. A crisis of commodities. Commodities are collateral, and collateral is money, and this crisis is about the rising allure of outside money over inside money. Bretton Woods II was built on inside money, and its foundations crumbled a week ago when the G7 seized Russia’s FX reserves...

Do you see what I see?

Do you see inflation in the West written all over this like I do?

This crisis is not like anything we have seen since President Nixon took the U.S. dollar off gold in 1971 – the end of the era of commodity-based money.

When this crisis (and war) is over, the U.S. dollar should be much weaker and, on the flipside, the renminbi much stronger, backed by a basket of commodities.

After this war is over, “money” will never be the same again... ...and Bitcoin ... will probably benefit from all this.

This financial war has been simmering in the background for almost five decades and the final battle is coming to fruition and Russia's response to sanctions and outright theft of its FX reserves will absolutely ravage the Western stranglehold on our global monetary system leading to a massive devaluation to the dollar in relation to precious commodities that we all depend on for survival. 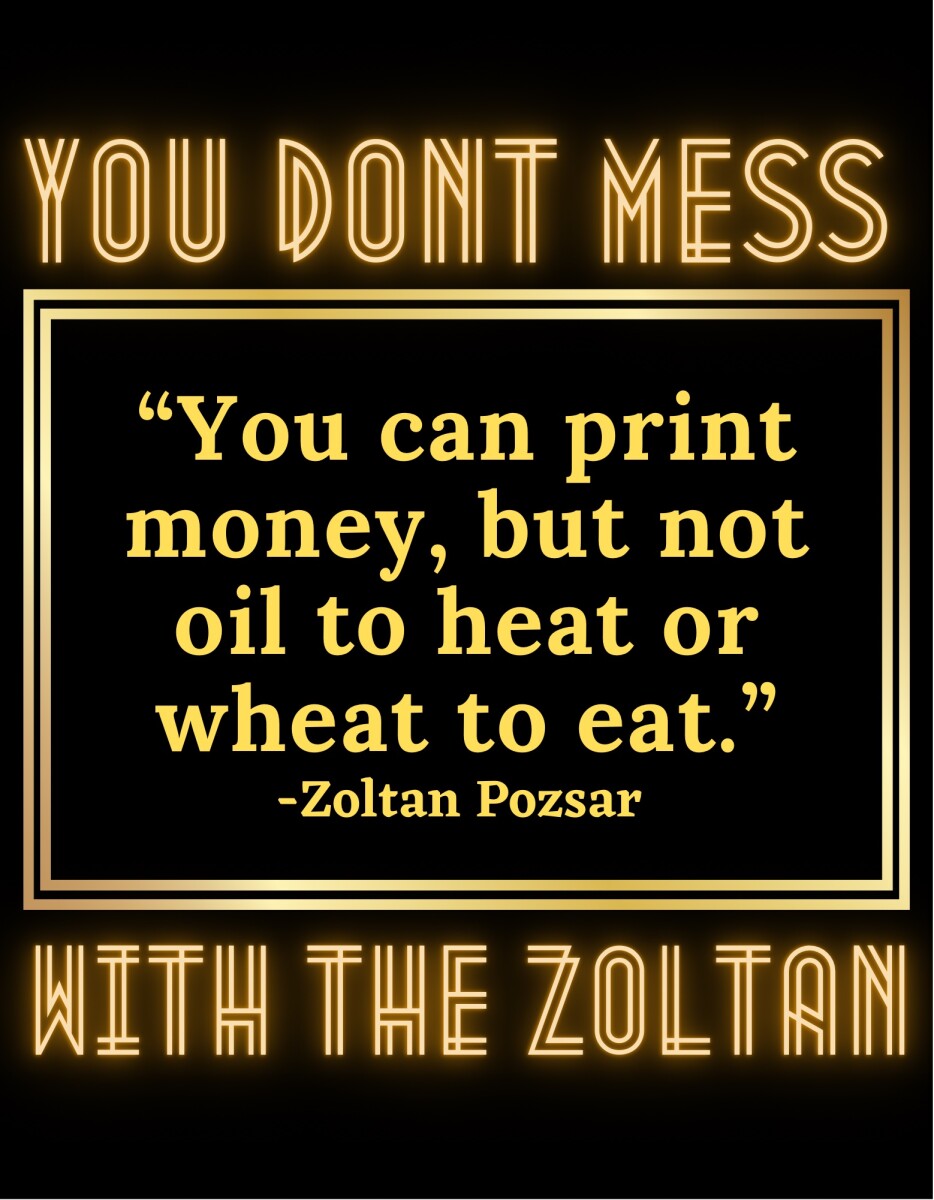 Russia's two-fold response to the U.S. administration - the tying of the Ruble to gold for domestic institutions and their insistence that future payments for Russian energy will on only be accepted in Rubles - is ushering in a new era that was hitherto unthinkable to not only Americans and the rest of the so-called "free world" but to the cabal of banksters known as the Federal Reserve.

And Speaking of Fiat Money II

I told you last issue that I would be keeping an eye on these MFers, and I wasn't lying. This is the most beautiful NFT art project on the Cardano Blockchain and these guys never cease to amaze me with their brilliant ZERO POINT TWO DOLLAR bills. This time I am giving you some direct links to some of the most interesting parts of the oldmoney.io website such as the The Inflation Times, Jealous Island (where you can view stats on the ownership of $0.2 bills), and the Xesserson House which is a repository of all the bills for your personal viewing pleasure. 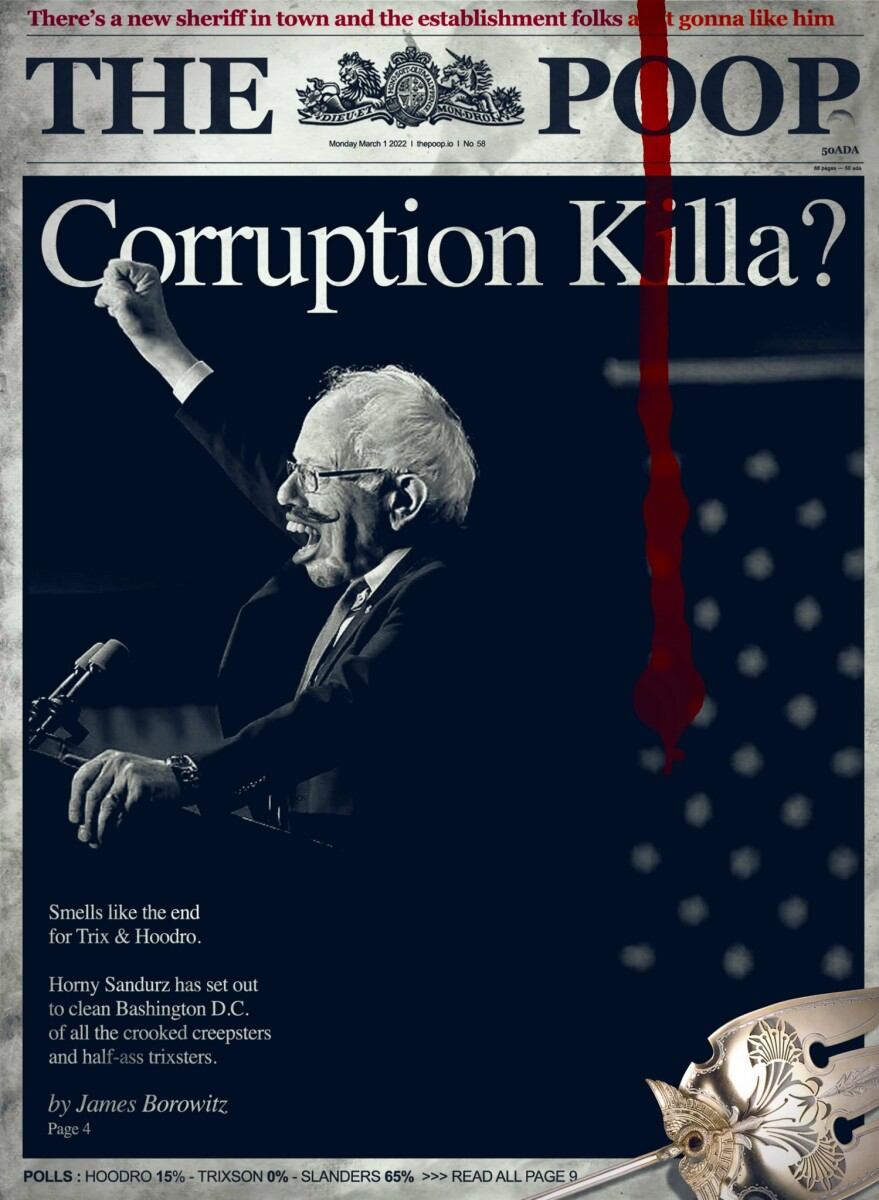 This marks the end of Issue 2 and if you missed the first issue then you can read it here.

Did you enjoy the art and Zoltan quote that goes with the Bretton Woods III portion of the article? Does your sullen Fentanyl-laced teenager march themselves off solemnly to Public Skool regaled in hideous mass-marketed multi-national corporate fashion stitched and printed by slaves in third world countries under the boot of U.S.S.A? I can't fix their acne (or their gender confusion issues for that matter) but I can fix their fashion problems by selling you this high-quality Made in the U.S.A. T-shirt featuring the art and quote in this article!

What's that? You don't like the cut of my jib and think you can do better? Then by all means use this link to sign up to be a contributor here on glorious Publish0x and show me what you're made of!