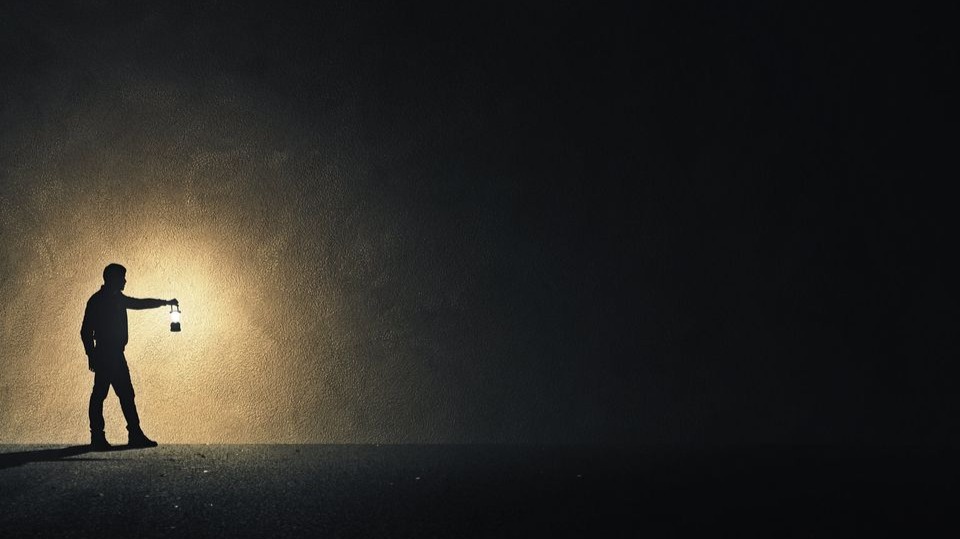 They had never met into the Darkness

They had never met.
In everyday life, they were separated by a city or perhaps whole continents, but in a dream these distances did not matter.
It was one of those vivid dreams, where you realize you're in a world of brain-generated fantasy, and although there were two people in that room illuminated by a bright white light who noticed this rather peculiar phenomenon or maybe just intrigued by it, they talked for a long time, maybe to test how deep this simulation could hold up to the questions that could be brought up by the human intellect.
A loud exclamation broke out between the two interlocutors who snapped standing, alarmed, looking for the origin of the interruption. They saw nothing but perhaps, the thing that seemed a hand to be swallowed up, along with his message from the darkness that was revealed to them now that they were devoid of the distraction that had kept them busy for a long time.
They were shaken by a primordial thrill that prompted them to begin to move in order to get out of the path of the almost alive darkness, which was advancing towards and around them.
A corridor of light stretched out of the room and was immediately taken by the two companions in search of an escape route that now conveniently opened in front of them.
They ran in this opening, without looking back, until the door that was at the end of the corridor cut off their escape.
They hit it with their shoulders, their fists, and their despair, but that door didn't move an inch as if it was painted on the wall, and that's how the tentacles of darkness reached and wrapped their heads.

She abruptly woke up in her room, among her things. A bad dream, a nightmare well orchestrated by his imaginative mind, repeated herself to calm down.
Once again the alarm clock was preceded, but decided that it was definitely not appropriate to steal, as she usually did, the proverbial 'five minutes'.
She went to the bathroom to freshen up his ideas and wake up completely from the terrifying experience, nodded to his blurry reflection in the mirror as if to greet it, and prepared for the day.
On her way to the office, she went to his ophthalmologist's, to collect her new and expensive pair of glasses, which nevertheless improved her day: to be able to see through a new and unscratched pair of lenses is a great feeling, like discovering the world for the first time.
Towards the end of her shift, she lost her gaze out of the window, admiring things with a now-improved perspective, and her eye fell on the nearby building, where a man sitting at her post seemed to follow her on her break from the monotony.
A man, very similar to the one in her dream. A thought that made her smile for a moment. But that smile was broken when a familiar thrill, like that which she had had in the realm of nightmares, ran down her back at the sight of the agitated act of the man who seemed to have recognized her and had the same thoughts she was having. They snapped up and rushed away from their windows.
She took refuge in the bathroom, closed her eyes, and took a deep breath. Opening her eyes she met with her blurred reflex, but this time without the excuse of obsolete lenses to justify its presence. She took off his glasses, frantically inspected them, used them to focus on other objects in the room but everything was in its place.
She rubbed her eyes, and as she opened them again, something appeared in her peripheral vision. She turned instantly to see half of the bathroom engulfed by a shadow that slowly but surely was approaching her.
Run, the instinct yelled at her. And so she did.
She crashed into the door opening it up and resumed her escape to the stairwell, thinking that perhaps the lights that normally illuminate them might have slowed its advance and given her time to escape. But the stairs had already been swallowed and when she turned around to find another route, it was too late again.

She abruptly woke up in her car. Lights lit up the wall of her office parking lot, tears flowing down his cheeks. Exhausted and desperate, she picked up the phone from the bag she held in the passenger seat, called the first person on the list, and she didn't care who she was, a friend, her father, even her boss. She didn't want to be alone. As it rang, she allowed herself to cry again to release the accumulated tension.
Finally, someone answered. The voice, the one of the man of the dream.
A primal thrill, eyes wide open, pointed on the darkness that was engulfing the parking lot.

A collection all the, well, scribbles, I do from time to time as training for, one day (hopefully) being able to write a proper book. I'll be ranging from attempts to horror, RPG session 'diaries' and fanfictions. No, not the 'SauronxDarthVader' kind of fanficts. Maybe.