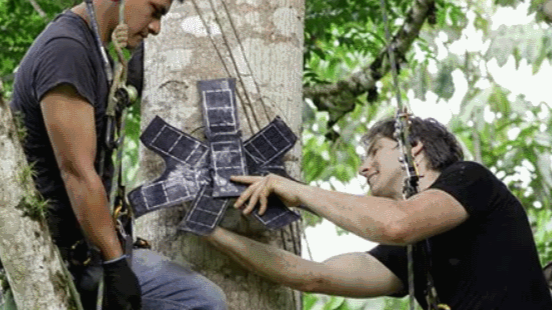 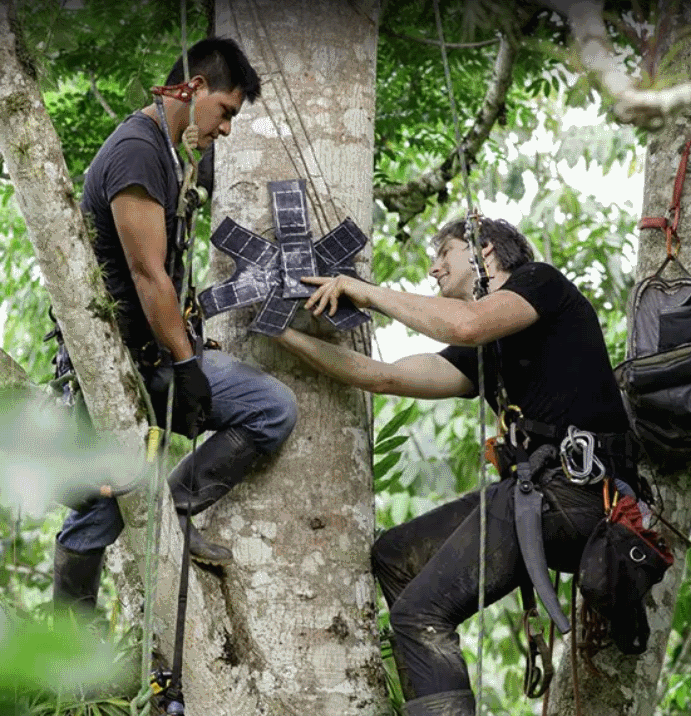 (source. Fair use (see below))

According to International Union for Conservation of Nature (IUCN)

Forests are home to over 80% of terrestrial biodiversity.
In the Amazon basin alone, more than 1,300 species of forest plants are used for medicinal or cultural purposes.
(source)

52 per cent of all land used for food production is moderately or severely impacted by the erosion of healthy soil.
(source)

With the world’s rainforests now shrinking so fast that they may be gone by 2100, the need for ways to prevent illegal logging and monitor forest wildlife is urgent.
(source)

Whether or not you believe in climate change, it’s obvious that the Earth’s forests play an essential role in our lives. In this post I’d like to tell you about Rainforest Connection – an organization headed by Topher White that came up with a cheap and effective way to protect the world’s forests from illegal logging and poaching.
Their technology (software and hardware) has been

There has to be 3 components for their system to work:

a) people
It’s the local communities and law enforcement/government agencies in the forest-rich countries, which can actually take actions against illegal activities.

b) connectivity
Surprisingly, a high-quality mobile network can be found in the/near forests

c) trash
Millions of smartphones are thrown away by people worldwide (most likely due to planned obsolescence by the way). Now a lot of them are donated by people to Rainforest Connection what gives them a second life. For more info on how you can get involved in their initiative go here.

That’s what White managed to use to create a network of “Forest Guardians”.
Basically, he took a smartphone, added solar panels to it in a special way, and placed those devices on the trees. The smartphone listens to sounds in the forest, sends the data to Rainforest Connection cloud API in real-time, which, in its turn, analyses them with the help of AI and sends messages/notifications to the aforementioned law enforcement/government agencies and local communities, so that they could react to the threat.
So, basically, the systems developed by Rainforest Connection provide them the notification system with the data on what kind of violation happens and where.

Note that the system can not only to pick out the noise of chainsaws, but also the sounds of trucks, road building and the sounds of rare/important species.

They can listen to all the sounds and we can pick out using artificial intelligence, the sounds of chain saws, or really any species.
(source)

So, the system also helps communities to prevent animal poaching and ecologists to study wildlife populations in a given area (ecosystem monitoring). And it will help to create a huge audio-library of animal sounds.

“Rainforest Connection technology has surpassed its proof-of-concept phase and has moved into expansion with over 60 new projects in the pipeline.
The amount of land protected will be the equivalent of taking 6 million cars off the road, 400 million trees protected, and 30 million tonnes of CO2 sequestered.”
(source)

The plan of Rainforest Connection is to expand the system application for protection of marine ecosystems.

As mentioned at the beginning, illegal logging is not the only reason of deforestation.

Agricultural expansion continues to be the main driver of deforestation and forest degradation and the associated loss of forest biodiversity. Large-scale commercial agriculture (primarily cattle ranching and cultivation of soya bean and oil palm) accounted for 40 percent of tropical deforestation between 2000 and 2010, and local subsistence agriculture for another 33 percent.
(source)

You see, a lot of illegal (and legal) loggers do illegal actions not because they are evil in their core, but because they need the money. I daresay that they are made by their environment with the lack of job opportunities and low level of education. Their families need to eat, and, probably, that’s the only way they see to get the money. So, in my opinion, even better solution to eradicate illegal activities mentioned in this post would be to increase the level of education and life (by applying scientific innovations) in forest-rich countries, so that they would have a lot of legal ways to make money or a way to live without the money (think of The Venus project).

This post initially was published by me on STEMGEEKS today.