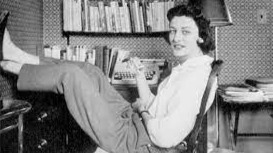 Consciousness is our ability to perceive and to think. Some people have it to an astonishing degree. Others, the plurality of people, have it to lesser extents and those at the far end of this spectrum are downright slow, dull and stupid mortals, through no fault of their own. But to all of us it's a double-edged sword. By this I mean that that the same ability to see others with spotlight sharpness and clarity will turn that bright light upon itself occasionally and see all the faults and blemishes inherent in itself.

I'm a serious reader of biographies and I often wondered, while reading the lives of people famous for their contributions in all sorts of fields, artistic or scientific, people gifted with exceptional minds, why many of them led self-tormented lives, or at least not happy ones. Wouldn't their intelligence, as its first order of business, make their existence comfortable, put their minds at ease, composed and at peace with the world around them? And wouldn't their achievements and the praises they received bring them some modicum of pleasure and confident self-esteem? In some cases it did. I suppose I can cite Dickens, and Shakespeare (though next to nothing is known about his private life) Edward Gibbon and George Bernard Shaw in this category of people who lived to a happy old age. And in science I could mention Einstein. But most scientists died still in pursuit of unravelling greater mysteries, their heads tormented with equations and mysteries yet unresolved.

And with writers the saga is even more pathetic. Look at the greatest of them, Dostoyevsky, Nietzche, Johnson, Poe, Beaudelaire, Rimbaud, even Samuel Clemens with personal and financial tragedies, the loss of his daughters and son. The list goes on and on. All of them saw deeply into human nature and felt all the more sharply the pains of their own and other's existences. A few actually went mad and you wonder whether too much insight is a good thing.

The kernel of these thoughts came from my reading a lengthy article in Wikipedia (I think) about famous women writers of the last century who drank to excess. It sketched the lives of six or seven. All of them had miserable childhoods and the article suggested that this was the germ of their alcoholism. It also mentioned their piercing ability to see and describe life in its bare and brutal contours.

I consider this is a far better explanation for their recourse to alcohol. It's like putting your hands to your ears to douse a continuous shrill sound, like the picture 'the scream.' But that point was never mentioned. 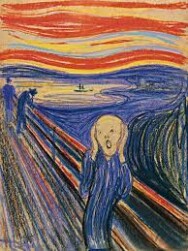 To a duller nature such human insights are imperceptible, and life flows along in a smooth or bumpy series of commonplace events, jobs, family life and distractions. But to a finely tuned, sensitive nature one glimpse into your own or someone else's nature might reveal a painful fault, like an off key to a pianist.

I suppose that some rare minds don't have the filters that allow most to go through life calmly, and those people fly to any form of sedation they can find. They are too high strung in this field of perception and constantly need to unwind, far more than others. Doris Lessing said: 'I was born with skins too few.'

The article was interesting, but I read it five years ago and can't find it. I remember our first authoress sat down at a Parisian street cafe and limited herself to one liter of wine per hour as she wrote, often the whole day long. Malcolm Lowry's biography by Douglas Day is one of the best biographies I've read. The sad fact is, that for all their fame, few of their lives were enviable.

B.A. in Latin and Greek from U.C. Berkley. Writer, Blogger and retired Electrician.

I am educated in the Western Classical Tradition, B.A. from U.C. Berkeley in Latin and Greek, English major, one year at U. of Toronto, studied under Alain Renoir and Northrop Frye, read most classics full time for many years after university in French, English, Latin and Greek to the modern day. I am interested in the near future of technology, what changes it imposes upon our heritage and character as humans. Short stories and Essays are my medium.