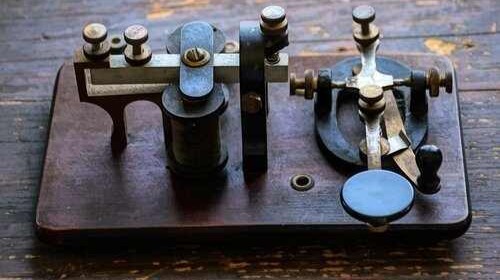 Digital Telegraph Review. Are you tired of those tiresome cell phones? Do you feel that calls and messages are going out of style? Are you one of those who believes that the old times were always better?

Well, this is the right product for you. After years of constant innovation attempts, Bell™, an American communication company has finally stolen the design of the Italian company Meu-Cci; creating a new product that merges the simplicity of the past, with the technology of the future: the brand-new Digital Telegraph.

Everyone remembers the large, old-fashioned telegraph created in 1829, which was terribly difficult to move around. Well, this has changed now. A device that was used to win two different world wars, can be used today to send jokes to your friends in Morse code while cooking waffles. Are you wondering how this is possible? Well, today’s best inventors have come together to make your ancestors’ childhood dreams come true.

The digital telegraph can be taken everywhere, as it will be the same size as a cell phone. But this time there’s one critical difference. It allows you to communicate with your friends by replicating the same experience of using an ordinary telegraph. The device will use a touchscreen, which you can repeatedly press in its digital knob to send codified messages. All of this while feeling your digital telegraph vibrate, which will give you the most real feeling of being in the past.

If you don’t know much about morse code, we send you a thousand-page manual with the first 569 simple steps to communicate through a telegraph, and in just four months, you will be ready to start using your new device. If you do not like to read, we also have a cassette available, where you’ll listen to everything you need to learn Morse code in only 36 hours. If you do not know what it is or where to play a cassette, just ask us.

This new communication device will expand the market and create greater competition in telecommunication services, because just like that pizza slice from two days ago, the telegraph is still just as desirable as it was from day one.

All the opportunities offered by new technologies were not wasted and were used to improve this product. Although the original version of the invention did not have these options, now you can enjoy new tools such as a watch, calendar, notepad, and the compass.

In its beginnings, one of the main features of this invention was its ability to send encrypted messages, some of them containing relevant data that could determine the future of a country. By using Morse code, millennial hackers will not be able to access to sensitive data that could compromise our lives.

This is something that has been praised by security experts around the world, including the Russian hackers who infiltrated the 2016 elections. They stated “where’s the internet? Where’s Faceb…? Naaaaah we won’t be reading that boring-ass manual, and we surely won’t be hacking this old-ass cell phone” when asked about the product. Of course, this makes the Digital Telegraph one of the safest devices of modern times.

The device features one of the newest features in the history of technology: it’ll be completely wireless. That’s right. You don’t have to worry about those old-fashioned cables anymore: the Digital Telegraph will include a battery that can be charged by plugging it to any electricity source, almost as if it was magical. We showed this quality feature to some users, and their reactions were from “amazing”, “just what I needed” to “Oh, like a regular phone?”, “Does it still exist?”, “But the first telegraphs didn’t need cables either”.

After denying another request of Meu-Cci to recognize the design of the Digital Telegraph as an unique invention, executives of Bell™ have revealed the desire of companies to sign partnerships to use their products in all their establishments, as a means of improving communications.

From now on, Starbucks coffee shops will have Digital Telegraphs as the only way of placing orders. This means that you’ll order a good cappuccino by using a simple combination of dots and dashes, just like our ancestors did.

Nevertheless, Bell™ also knows that some people will find it difficult to separate from their smartphones.

They’ve also made a Digital Telegraph app available in the Play Store and App Store of Android and iOS users, which can live up to the experience of having a true digital telegraph on their phone.

The app will be priced at $19.99, and it will also include features such as the watch, calendar, notepad, and compass.

Digital Telegraphs will also be used to improve other aspects of technology, such as video games. The device will be included with the following versions of Call of Duty: Modern Warfare, a true innovation that has been welcome by gamers around the world; the majority of them seeing it as both a “unnecessary, but fun addition that could’ve been included like ten games ago”.

Verdict: The past is in your hands, and now will also fit inside your pocket. The Digital Telegraph is available for sale now in your nearest closed-for-quarantine store. By purchasing the product, Bell™ denies any responsibility for injuries, radiation-induced diseases, and potential use in subsequent World Wars.