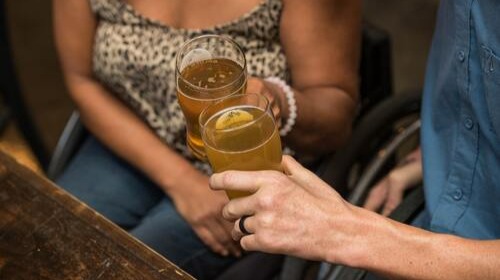 5 Speed Wheelchair. Many people think that using a wheelchair is all about fun, comfort, or for many Americans - laziness. Well, not many people, but now thanks to the arrival of the brand new Five-Speed Wheelchair, not being able to walk will also be seen as a sign of elegance and power. This visionary vehicle is an excellent opportunity for those who have suffered all kinds of impediments to adapt to our modern and fast-moving society.

This incredible Wheelchair works with a steering wheel that contains one button used to speed up, a clutch in the form of a hand lever, and a stick shift with five speeds and reverse, which can reach almost 120 miles per hour. The standard model has a leather seat, stereo, and a seat belt. It does not include any driving mirrors, but it has a double cup holder. The Five-Speed Wheelchair, designed to keep up with car traffic so that you can annoy drivers. Yet is also functions on the sidewalks and interiors so that you can annoy pedestrians. Currently, there are no models of the Five-Speed Wheelchair supporting any passengers, but its shock absorbers can endure a load of up to two girls sitting on your lap, unlike those lame F1 single-seater cars.

The full design of the Five-Speed Wheelchair is a collaboration between Toyota, Lamborghini, and Mattel. Ford Mitsubishi, the CEO of Toyota Motor Corporation, said in a press conference that the concept of this innovative Wheelchair was an idea that he had in the middle of a hallucination. “We were looking for something new and different, something that we could sell to a new target. I was on my day off, and I found some brownies my son had hidden in his room. I took one and ate it while I was watching that 2000’s X-Men movie with Patrick Stewart as Professor Charles Xavier. Then, I had “the vision”. The Professor turned into Dominic Toretto and told me that he wanted to drive again. ‘Please, Ford, do this for me… for the family’ he said, so I started to work. Sometimes, I think, I should have done it when Stephen Hawking personally asked me the very same thing. But, you know, the family…” The Japanese businessman then had to stop his intervention, with his eyes full of tears.

The design and development team responsible for the Five-Speed Wheelchair is continuously working to improve every single detail of the vehicle to be able to increase its sale price. Early buyers of the first generation of the Wheelchair stated that it had some troubles when shifting to the fifth speed, which happened to be a factory problem of the transmission that caused some accidents back then. Completely worried about the situation, the crew immediately spent a few weeks of designing, research and trials until they accomplished exactly what they were looking for: the improvement and perfection of the stereo.

Users of the Five-Speed Wheelchair have discovered that this product is not only incredibly fast but also quite aerodynamic, which led to the genesis of a new form of skateboarding with Five-Speed Wheelchairs that they now call “chairboarding”. This new urban activity has become very popular amongst disabled teenagers –and teenagers that used to be completely healthy, but now are disabled because of trying to chairboard, which has made the business grow considerably. The sport has become so popular that cities are building chairboard parks and a videogame is in development featuring Tony Hawk with one leg.

The acceptance rate of the Five-Speed Wheelchair has been pretty fair, taking into account that it costs approximately as much as a regular car. Nonetheless, some users of this vehicle are now causing different troubles in society. Nursing homes and geriatrics have become the cornerstone of delinquency and vandalism. Elders and disabled people have united forces and created a new kind of motorcycle club, organizing deadly illegal races and orchestrating elaborate thefts on a large scale. Thanks to the speed, range, and the ability to be driven on almost any terrain, members of this new mafia are practically impossible to catch. It is turning those who were once less mobile into escape experts, and also the only people who wanted to see Bran Stark taking the Iron Throne. When creators found out about the usage these criminal groups were giving to the Five-Speed Wheelchair, the design team decided to take action and include holders for different kinds of guns, and hidden compartments for contraband - because the customer is always right.

Verdict: throw that old-weak Wheelchair away and watch your steps because Five-Speed Wheelchair is out now! The ReviewHuntr team doesn’t support illegal racing or gambling with this vehicle unless you have some solid tips on an underdog.