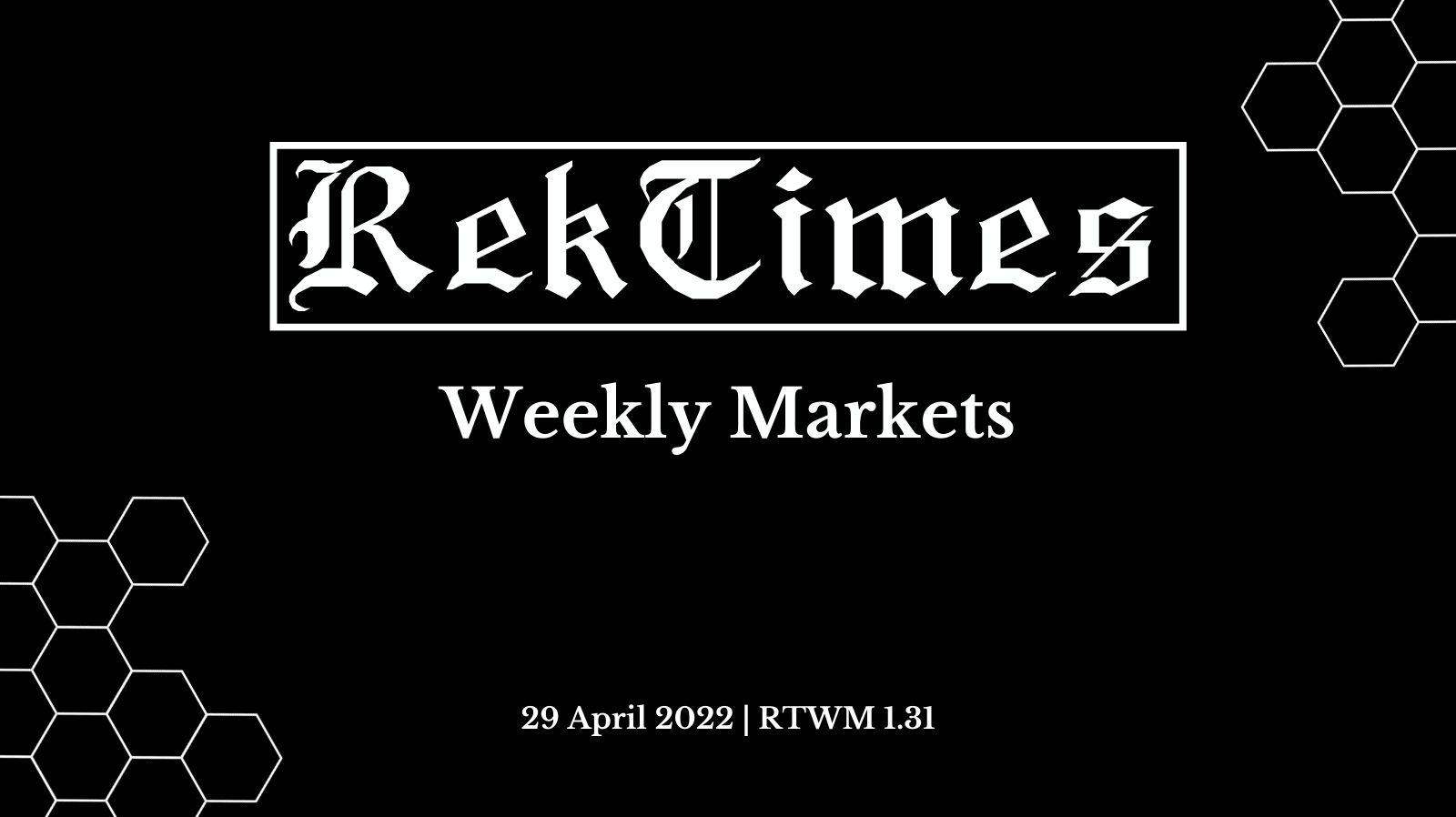 29 April 2022: The cryptocurrency market is now undoubtedly on its hind legs attempting to avoid a large downtrend. After the past two weeks of selling pressure, the Total Crypto Market is at critical long term support that will determine if the downtrend that began in November 2021 will end with consolidation at present levels or enter a potential >50% decline.

We will present the key levels to watch and analysis on the health and direction of the Total Crypto Market, Alt Coin Market, Bitcoin, and Ethereum. We are skipping Top Headlines just for this week to focus on additional charts and data.

The cryptocurrency market entered a bear market officially in November 2021 after a signficant market top. Since then, prices have remained volatile but relatively sound in consolidation. This appears ready to shift, especially for altcoins outside of Ethereum.

Market sentiment has remained in a status of ' Extreme Fear'.

The full Fear & Greed Index chart is shown below:

The Total Crypto Market has entered a moderate decline following the small rally that coincided with the last half of March 2022. Since the beginning of April, the market has sold off nearly 20% overall.

The Crypto Total Market Cap is shown below: 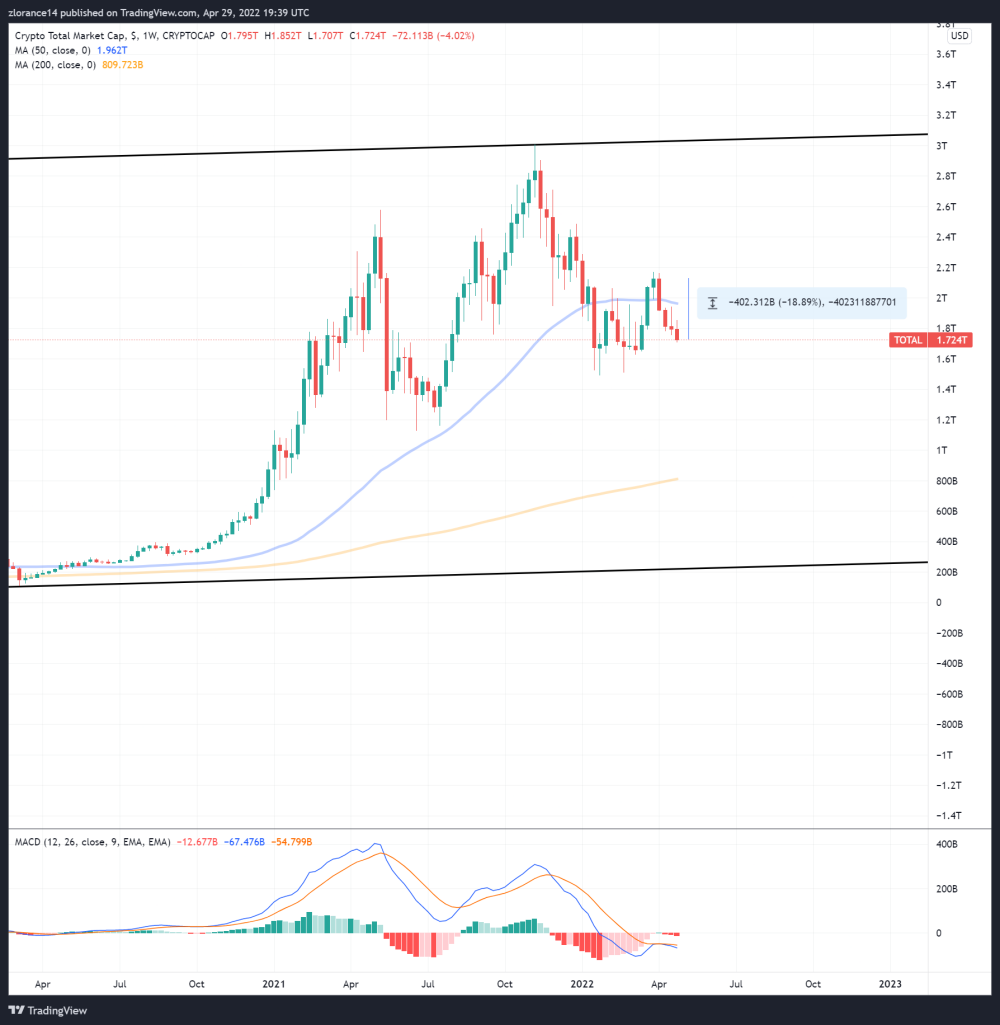 Bitcoin has obvious support at just above $37,000 and has utilized this trending area as support over the past few months. This has actually helped Bitcoin maintain a slight uptrend overall since mid-January 2022.

With this in mind, Bitcoin too has been unable to breakthrough its 50 WMA and has entered a steep decline of roughly 18%. Additionally, the MACD is suggesting another negative cross-over, indicating falling momentum.

The Bitcoin/USD Weekly chart is shown below: 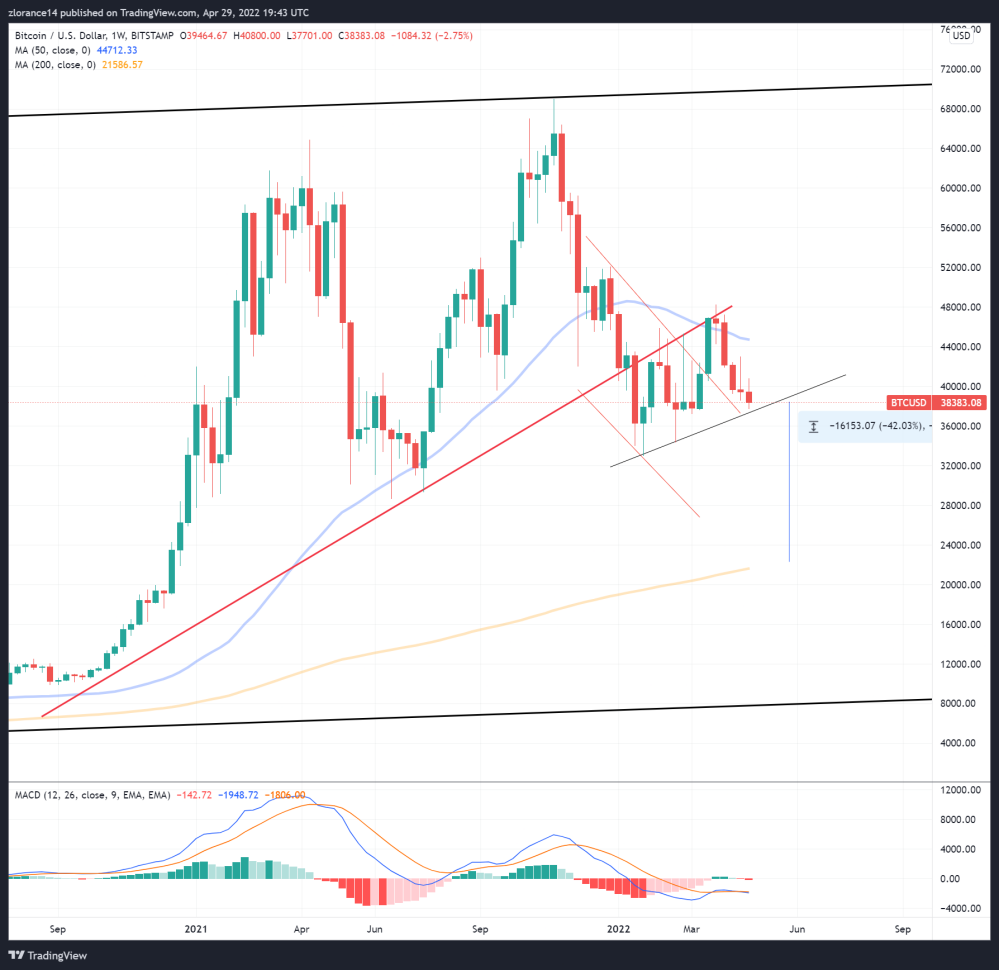 The Total Altcoin Market Cap is also at a support level (approximately $995 billion), though it is far from confirmed as any legitimate longterm price levels. The weekly chart is showing, once again, an obvious failure to maintain price action above the 50 WMA and looks to have long term support at the 200 WMA around 59% down.

The max projected market cap reduction for altcoins should be expected at ~$500 billion.

The MACD has also indicated another negative cross-over, most signficantly on the monthly chart. This cross-over is the first since the crash in 2018.

The Total Altcoin Market Cap is shown below: 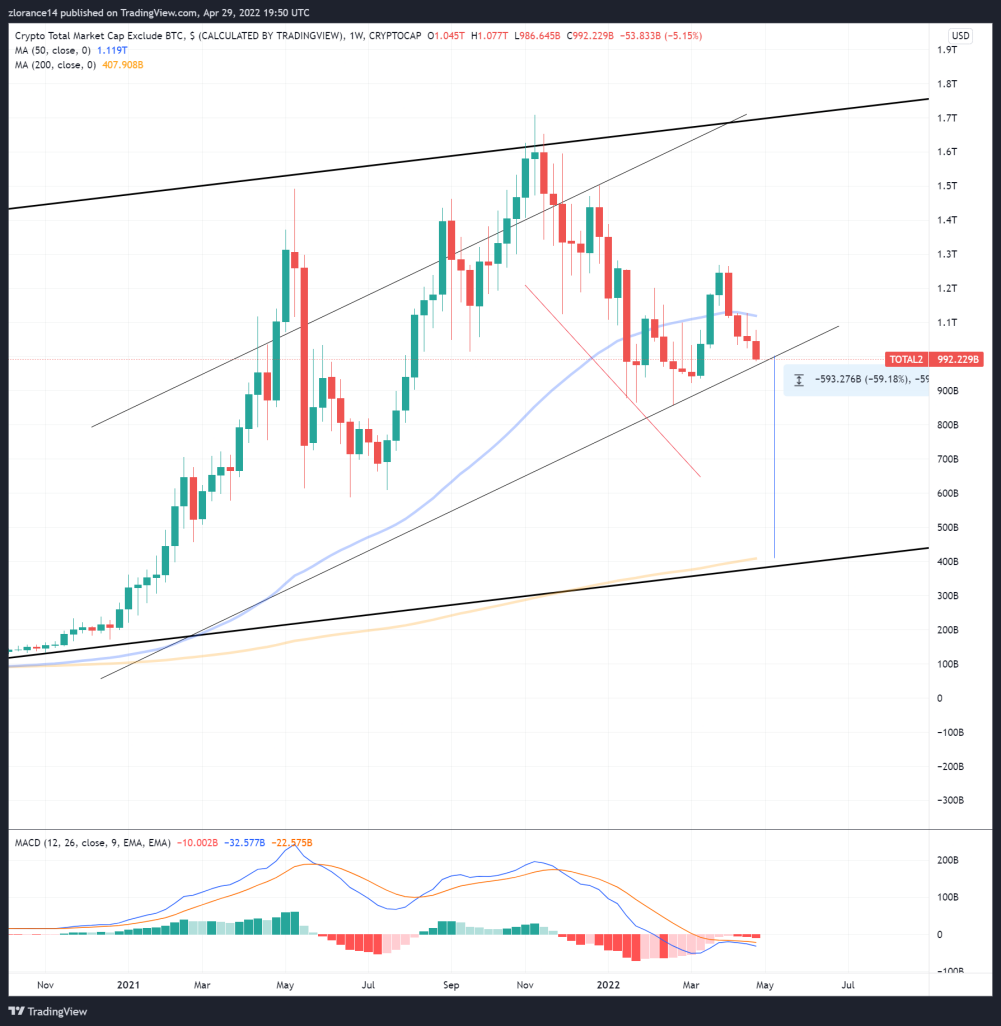 Despite the bullishness of The Merge potentially this summer (2022), Ethereum also is showing relatively weakness - especially long term.

Momentum on Ethereum has reversed and the MACD has had a negative cross-over for the first time since 2018. Ethereum has about as much downside as the Total Altcoin Market, around 59%.

Ethereum does have relatively significant support at the $2,500 level which could serve as a major consolidation point for ETH. If this level breaks and is confirmed, expect a potential decline down around $1,300.

The Ethereum/USD Weekly Chart is shown below: 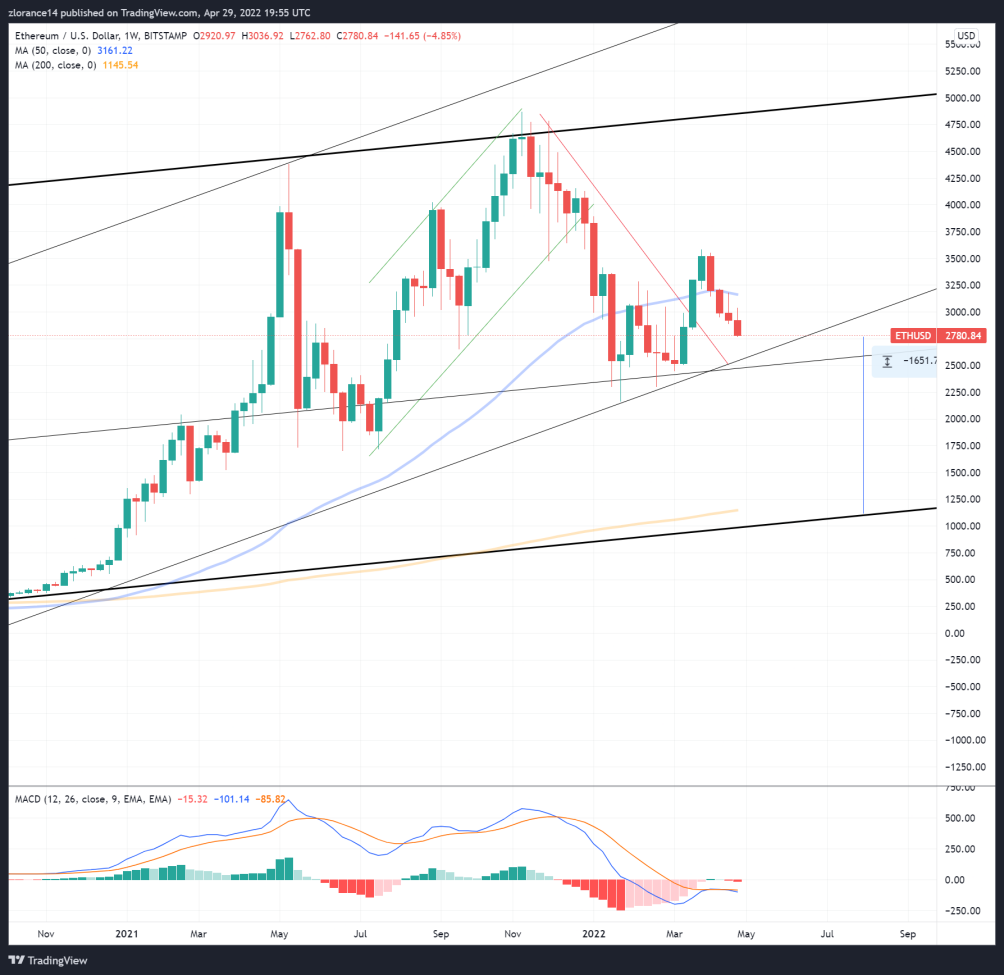 The picture is pretty clear for us at this point - November was the long term market peak. The price action, long term, has been nothing short of bear market rallies and volatile price action.

There is still a minor probability that the market remains in consolidation within a reasonable percentage of current valuations. The exact levels we are watching are the following:

With the most emphasis placed on the Total Market, if these valuations break - expect pain of potentially 40-60% on blue chip cryptocurrencies and greater than 60% on smaller altcoins.

Both cryptocurrencies and stocks have entered signficant decline. The macro-economic environment around the globe right now is indicating a potential recession at least in the near term. This does not necessarily negative price action will continue to show on cryptocurrencies, but the long term fundamentals simply do not paint a great picture for investors.

MAJOR EMPHASIS - If you bought cryptocurrencies at any point during late 2021 into 2022 and are sitting on already big losses - it is highly recommended to not sell. For those who entered the market prior to 2020, this is obviously a different situation. That said, the absolute best strategy is to dollar cost average buys down.

Please keep in mind this is not financial advice, but merely observations and free analysis. We cannot predict the future, but are confident in the long term technicals & fundamentals.

We hope this analysis is helpful in your portfolio building and wish you the best of luck! 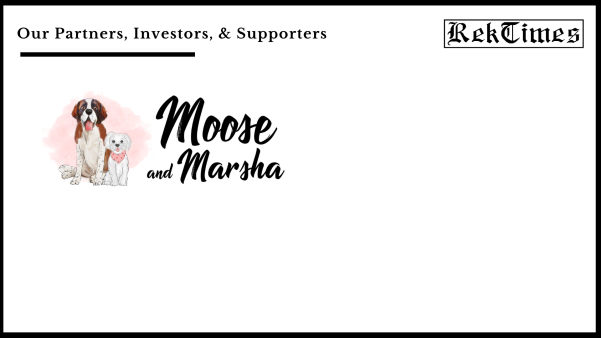