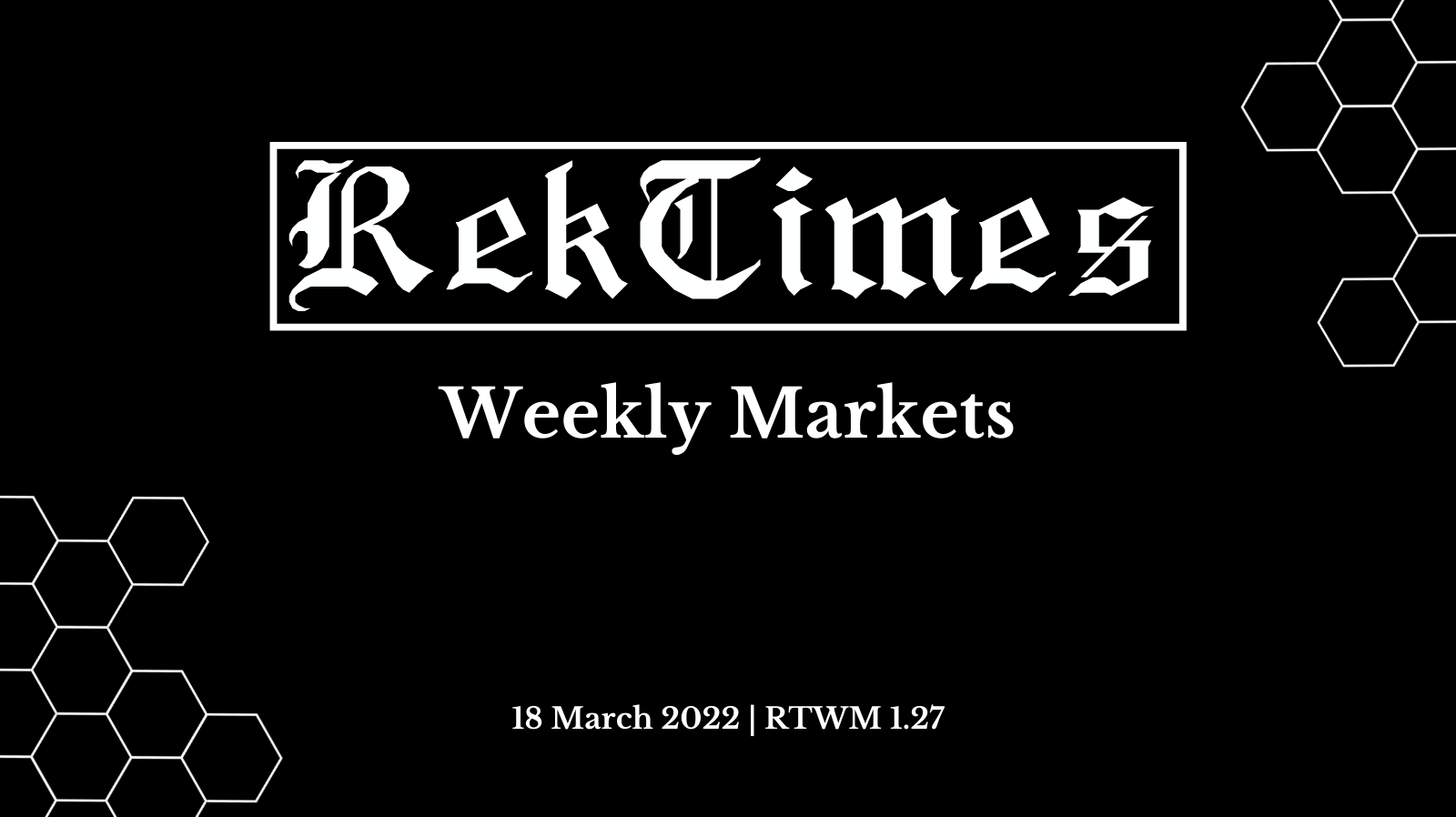 Get Ready for a BIG Move in the Crypto Market | RTWM 1.27

18 March 2022: RekTimes returns this week after a short March hiatus. Before diving into the news & analysis for the week, there are some important (and exciting) updates to share!

Our founder and main author Zacharias has joined the growth team at Admix, though will remain a key contributor at both RekTimes & CryptoEQ. Admix serves as a bridge between global brands and the developing metaverse, utilizing their revolutionary In-Play technology solution that allows brands to monetize through non-intrusive ads within the metaverse.

Thank you all for your continued support! Expect further development in the near future (Q2 2022).

The balance of the world became unhinged with the Russian invasion of Ukraine. Since then, economic sanctions have fallen over Russia and many of the Russian oligarchs. Thus far, this has done little to deter Russia in their conquest of Ukraine.

With western nations like the United States taking the necessary steps to discard dependence on Russian oil, gas prices have surged essentially worldwide. This has triggered additional conversation about inflation, the fate of the USD, and where the world goes from here.

Despite the ill sentiment surrounding the state of the world, the crypto market is gearing up for a potentially parabolic move as the Total Crypto Market looks to break out of its present trading range. Specifically, Bitcoin is holding more or less above $40,000 USD while Etheruem is making a move back towards $3,000 USD ahead of the highly anticipated merge to Proof-of-Stake.

It isn't just crypto either - stocks have experienced their best week of gains since November 2020 per the New York Times.

With the massive merge of arguably the two top NFT collections, the NFT market has become more consolidated than ever before. Immediately following this news was the launch of Apecoin - a cryptocurrency based off the Bored Apes Yatch Club NFT line. That coin received instant listings on some of the world's largest exchanges, including Coinbase.

Outside of NFTs, the sentiment around the cryptocurrency market has begun to grow increasingly optimistic. Prices have been trading in range more or less since January 2022 and it has allowed for investors to accumulate bags. The market has also been pointed out to be valuing certain cryptocurrencies substantially below what they produce in value to the cryptoeconomy as a whole.

One such example of this was pointed out by Coindesk in an article today on Chainlink. In fact, Chainlink now secures nearly $60 billion USD in value (an 800% increase) while only growing 30% in market cap. Coinbase has stated it believes it is due to "several issues" with the LINK token, though the community has been quick to disagree.

Cryptocurrency adoption has continued to increase. This has been especially prevalent in emerging markets and stressed nations such as Ukraine or Russia.

Further Reading - In the Know

The cryptocurrency market has found a rising floor above the $1.6 trillion USD mark - a trend that is setting up either a major breakout or breakdown.

Additionally, market sentiment has reached a state of fear at 28 pts, up from a state of extreme fear last week.

The full Fear & Greed Index chart is shown below:

The Total Crypto Market has bounced from its floor at ~$1.64 trillion USD and risen to the top of the price channel at $1.86 trillion USD.

It is possible that the market does not choose a direction until the squeeze point in the first week of April:

The range on Bitcoin has been larger than that of the total market but is still following nearly an identical pattern. Bitcoin could potentially trend sideways into the month of April without a breakout.

The altcoin market (total crypto market cap minus Bitcoin) is still at almost an exact $1 trillion USD market cap. With Ethereum pushing towards its major overhaul and numerous ETH-based projects (think Uniswap, Aave, etc.) significantly off their all time highs, the potential for a massive altcoin run should be acknowledged.

The total market cap, minus Bitcoin, is shown below:

Five months into this decline, the Total Crypto Market has not made deeper lows since January. There is obvious, significant support near present price levels and building momentum to move upwards.

With the bullish thoughts in mind, it must be acknowledged that a direction has not been decided on yet. There is essentially an equal probability that we see a significant move lower rather than upper. RekTimes is holding a bullish bias, but cautious dollar cost averaging is still a highly efficient move in times such as this.

In times of extreme duress, such as the ongoing war in Ukraine, it has become apparent that the cryptoeconomy is beginning to serve the vision that has been held for it - serve as a viable alternative to failing economies. The interest from individuals to institutions is only growing with each passing quarter.

The markets are building bullish momentum despite the declining macro enviroment and the US Fed raising interest rates. In the coming weeks, we will ultimately realize whether the moves we are seeing now is a last breath or a definitive breakout.