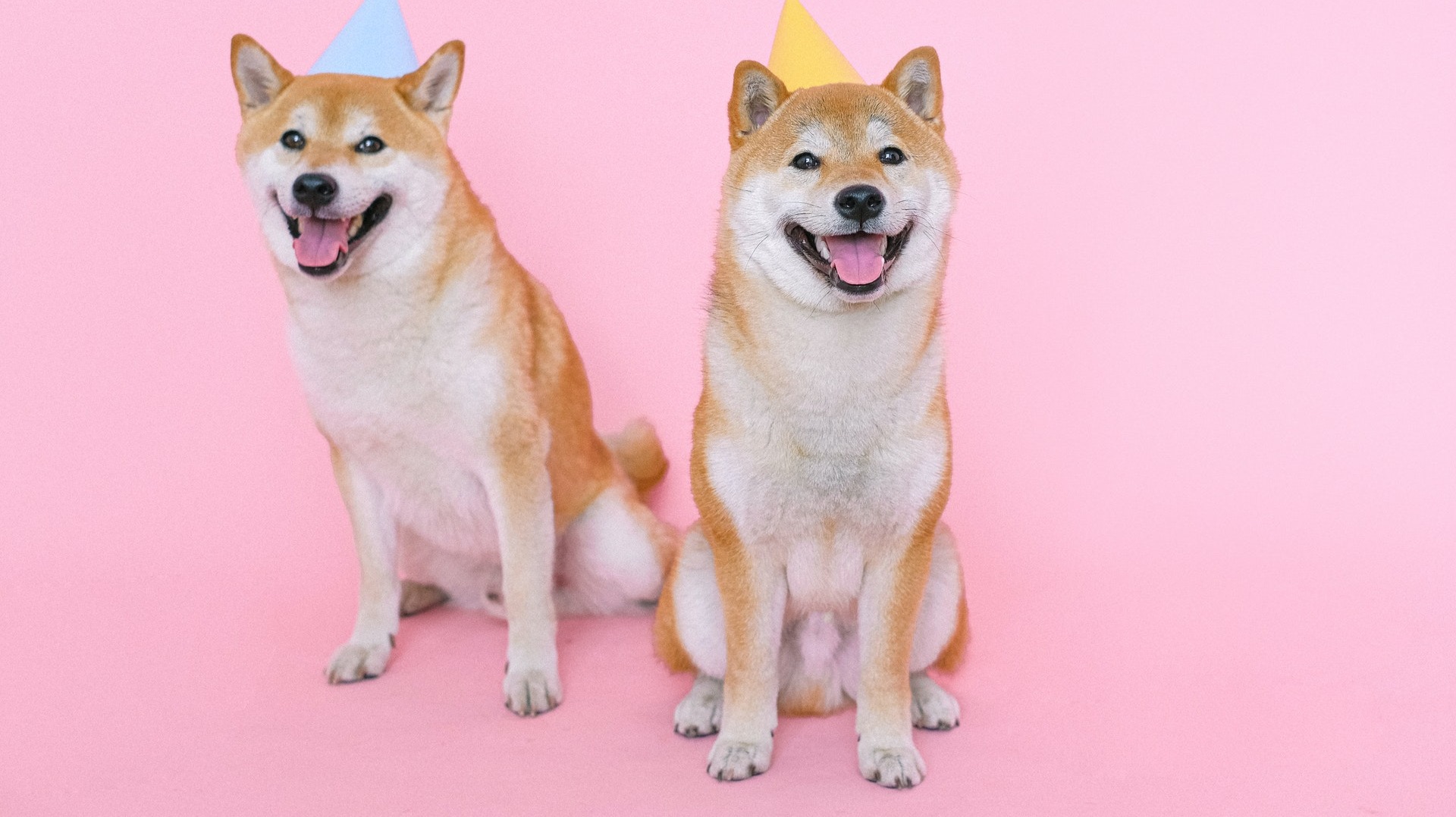 Shiba Inu (SHIBA), the doppelganger of Dogecoin (DOGE) on the Ethereum (ETH) blockchain, has gone crazy over the past week, going up by more than 1500%.

Unlike other cryptocurrencies, SHIB does not have a long history with most of the exchanges provided on TradingView where the graphs are provided. This will also apply to other crypto chart websites. It was recently added on many popular exchanges over the past few days, which will be explained later about the cause of SHIB's crazy movement. The only long history provided for SHIB is with Uniswap, and so will be used for the analysis, as opposed to Binance for other analysis in other news posts.

When applying 1 year on TradingView for Uniswap, it does not provide the full range of 1 year, starting from the 2nd of August 2020. There is a similar trend to many of the other mooning cryptocurrencies (e.g. Ethereum Classic - ETC and DOGE). It begins low and flat, facing a bump midway through April this year to face a decent movement upwards that ends to a net gain, following to relative straight road as before. After some time with this bland trend, SHIB suddenly rockets upwards, face a small resistance, then continues further upwards. Currently, SHIB has moved quite a bit from its ATH (All-Time High), as depicted within the graph. 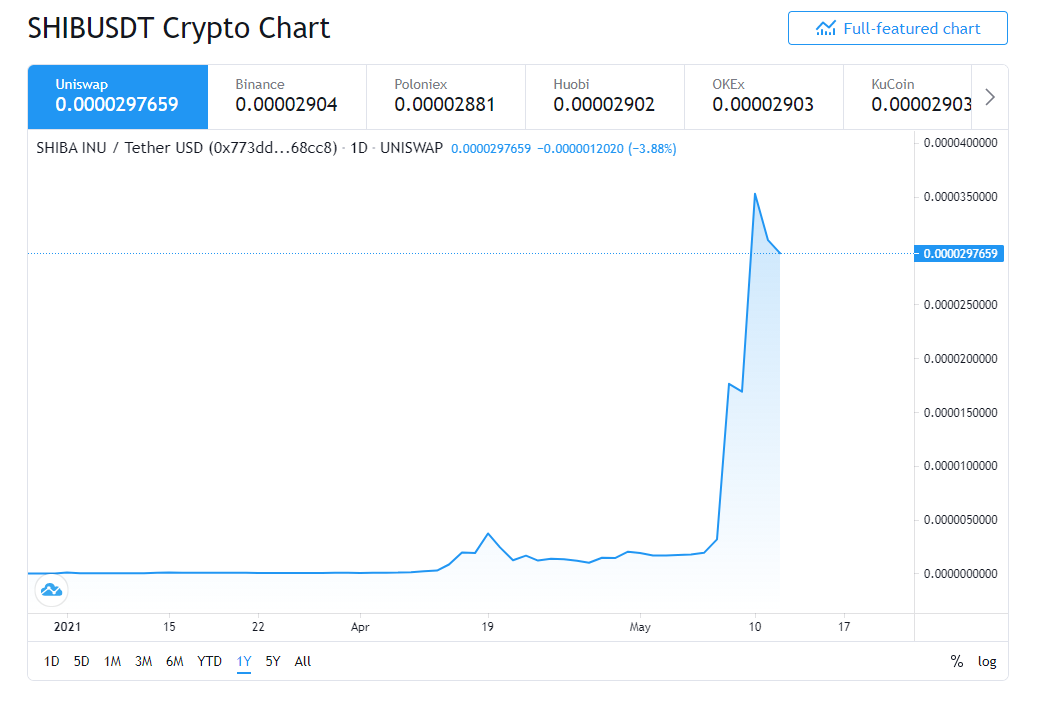 Zoning in with 1 month, the accuracy of the graph becomes much more improved. The pump of SHIB is more clear with a bumpy road at the beginning followed by the crazy jump up. With SHIB's leap, it comes in two stages for its current position. The first starts on the 7th of May, moving halfway to what it is now. It creates a resistance at this point, fluctuating up and down in successive spikes over the next few days, before turning to its second stage on the 10th of May to meet its ATH. As SHIB hits its ATH, it tumbles downwards decently for some time before correcting to have a similar fluctuating pattern as beforehand. However, it is important to note that this fluctuation currently has a net loss than the previous one. A third stage is possible to leap even higher, but time will tell on what the future has installed. 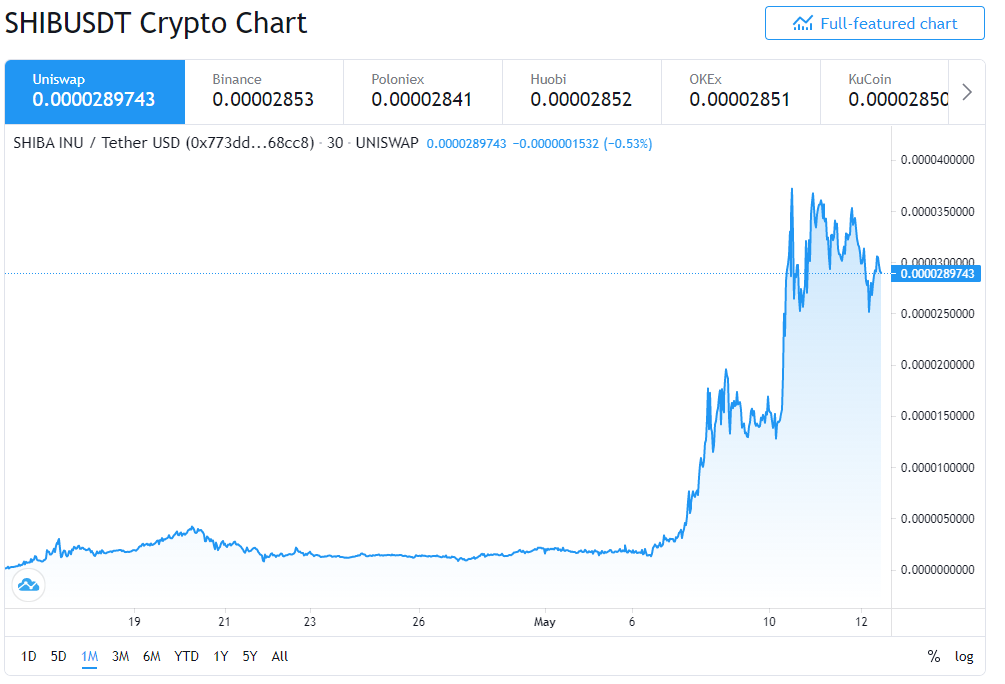 When going into the 1-day scope, the spikes usually expected for good accuracy becomes non-existent. This is most likely is because it is supplied for Uniswap which has a slower refresh rate than other exchanges like OKEx. With the trend for the past day, it appears volatile, full of dumps and pumps to some degree. SHIB hit its lowest of the day early today, quickly recovering over the next hours to peak and follow once more, but not meeting near its lowest over the following time. 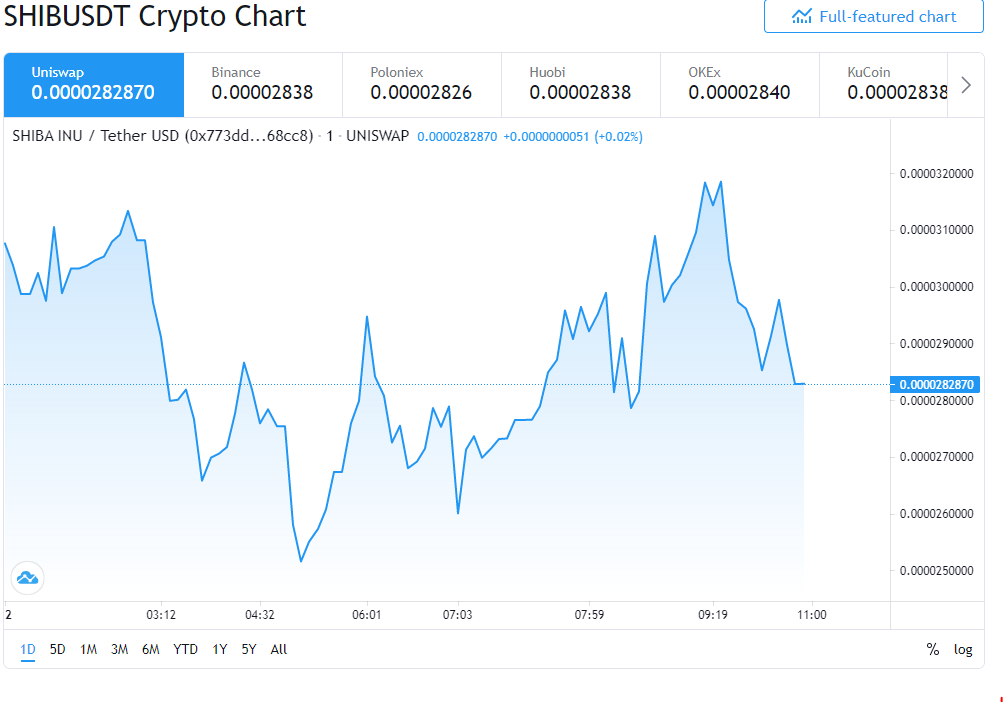 The statistics of SHIB currently are as follows:

One big reason is the great movement of altcoins that has happened in this month and the month previous. It is safe to say that it is alt season now, Bitcoin (BTC) not very bullish in comparison to its historical movement, altcoins taking the spotlight in the crypto market. The most popular of them all is DOGE, once hitting fourth on the crypto leaderboard according to market cap, which you would not expect to see from a memecoin that virtually has no support. With DOGE's great movement, many would turn to SHIB, which is an alternative, being based on the ETH blockchain rather than on the Litecoin (LTC) blockchain for DOGE. To be more accurate with DOGE, it is not based on the LTC blockchain but is a fork of LTC - not so with SHIB. Anyhow, DOGE's performance flowed onto SHIB, and thus creating this massive pump.

Another possible reason is listing on big crypto exchanges. The first popular crypto exchange to have SHIB listed was OKEx, which is a centralised cryptocurrency exchange that has received great momentum with its native token over the past fortnight. When OKEx listed SHIB on its exchange, it spiked, quickly falling to its previous trend. Soon other exchanges followed within the next few hours that created new spikes. However, the greatest spike was with the listing on KuCoin, starting at around the centre of the graph. KuCoin is a massive cryptocurrency exchange, famous for the many crypto gems it lists, and SHIB is another case, many catching the supposed opportunity as it lists on KuCoin. Binance was late to the party in listing SHIB, doing it on the 10th of May, and caused a drop rather than a rise on its listing. The trend of top cryptocurrency exchanges provided by TradingView is given below. 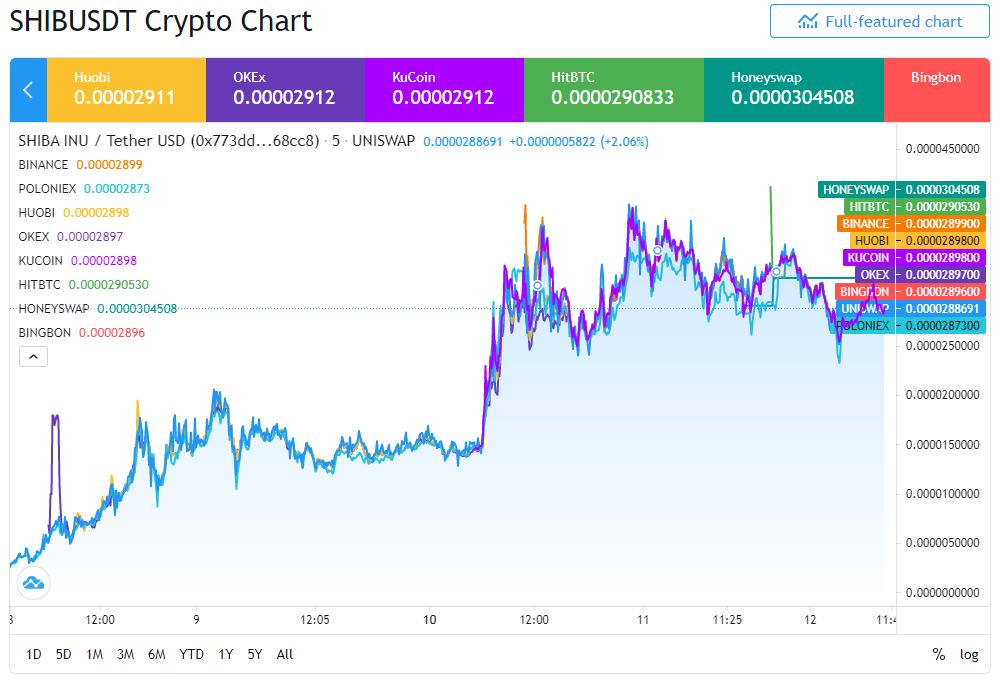 According to the founder of SHIB:

We sent over 50% of the TOTAL supply to Vitalik. There is no greatness without a vulnerable point and as long as VB (Vitalik Buterin) doesn’t rug us, then SHIBA will grow and survive.

This means that with a market cap of approximately $12 billion, Buterin (the founder of ETH) has $6 billion in SHIB!

CryptoPotato - What is Shiba Inu (SHIB)? Read Before You Invest - https://cryptopotato.com/what-is-shiba-inu-shib/