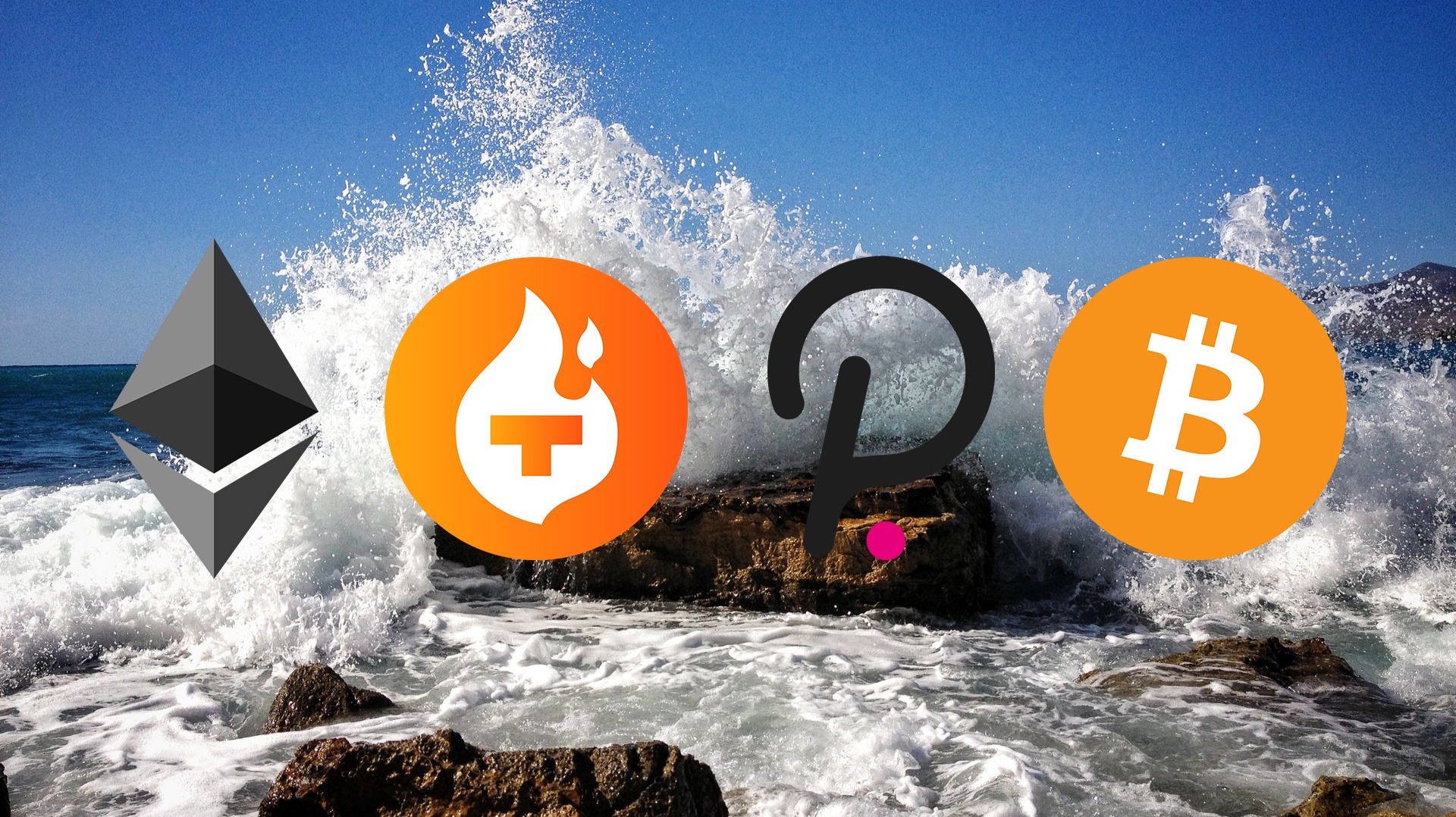 After some steady gains over the past few days to give hopes of a recovery in the crypto market, the market has crashed again with almost all cryptocurrencies at the red.

Taking a look at the top 10 cryptocurrencies according to market cap, notice that all of them have had more than 10% losses over the past 24 hours excluding stablecoins. The highest of them of all was Polkadot (DOT) at -15.4% at the time of writing. Bitcoin (BTC) and Ethereum (ETH) have faced decent losses as well, being respectively -10.2% and -11.9%. What is interesting is that ETH has a higher 24h volume than BTC, and this has been happening frequently over the previous days. The market cap gap is also dropping between them, ETH approaching closer to BTC, and this brings ideas of BTC soon to become overtaken by ETH, which would be a massive event in the crypto world, unprecedented in its history. Binance Coin (BNB) has lost its 3rd place again to Tether (USDT) once again after retaining it over the past few days, a large gap established between the two in market cap of about $10 billion. 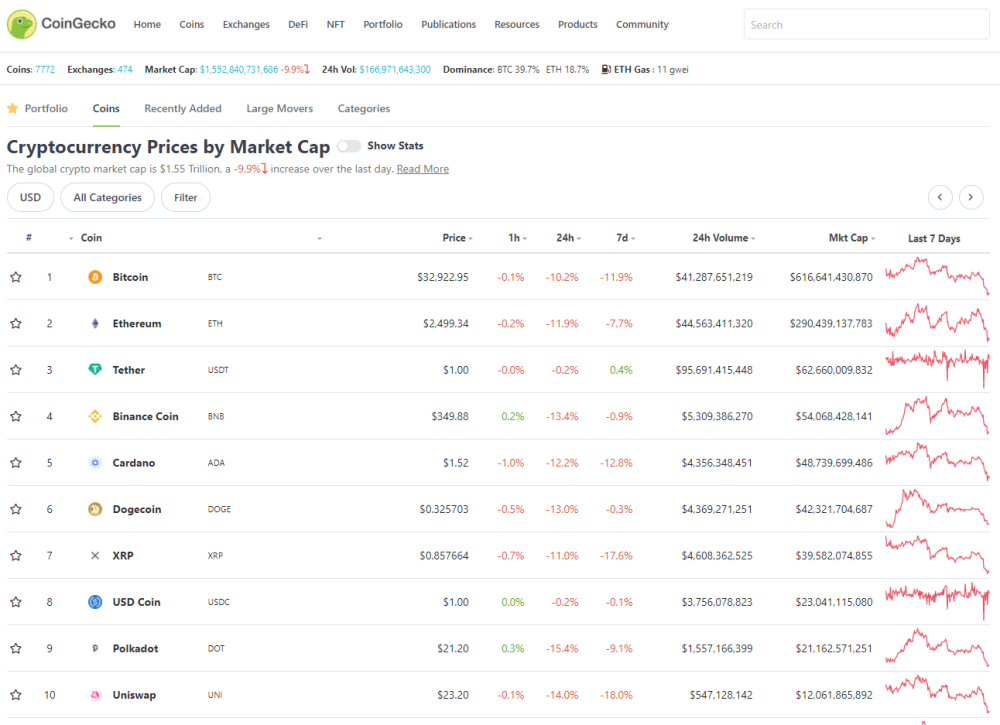 Going into the top 10 according to 24h volume, USDT comes out in top as usual at about $96 billion, followed by ETH at about $44.5 billion, then BTC at about $41.3 billion. It is surprising to find Binance USD (BUSD) at 4th for 24h trading volume sitting at about $6.3 billion, which is more than half its market cap of about $9.6 billion. BUSD is also above BNB in 24h trading volume, which would be expected to be the other way around, BNB being dominant over BUSD, but it is not so in this case. One possible reason is the migration of many from BNB blockchains into BUSD, waiting for the crash to cool down and buying at the dip. Ethereum Classic (ETC) makes an appearance as well at 8th place, which is another interesting thing to think about. 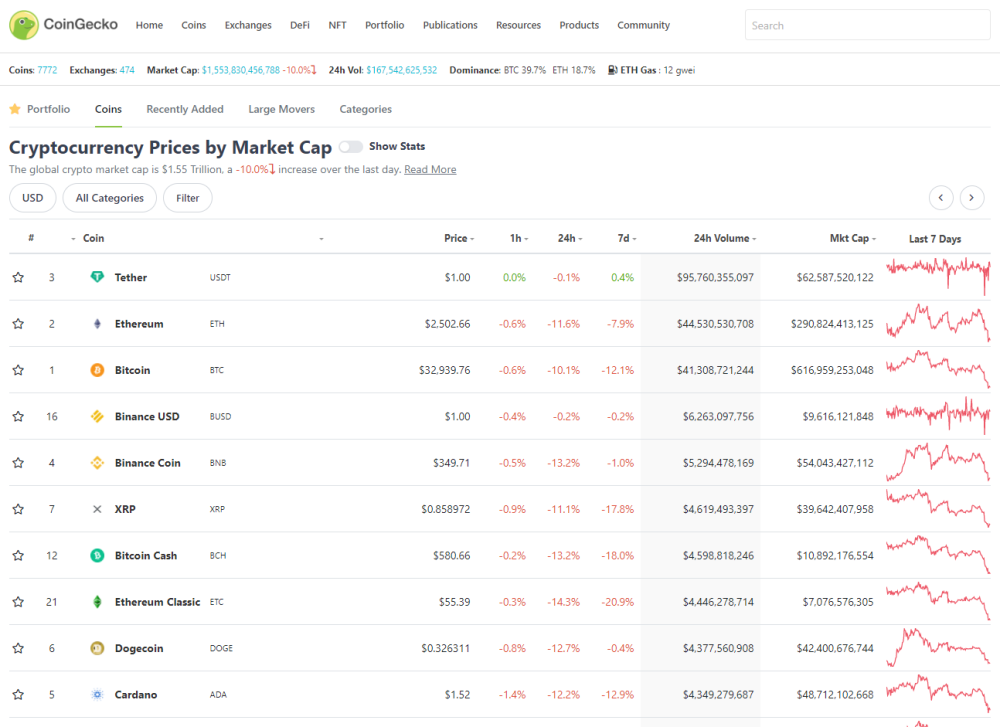 When going to the top 10 gainers over the past 24 hours, striking results come out. Only three cryptocurrencies other than stablecoins or their derivatives have experienced gains, meaning that all other altcoins within the top 100 have experienced a loss, showing how widespread the crash is. But that is not all. Perhaps the most striking result to see is the 24h gain of Theta Fuel (TFUEL), which is currently at 23.0%. More will be detailed of this in the section below with possible reasons as to its cause. The top three gainers, it was, as mentioned, TFUEL (+23.0%), LEO Token (LEO - +14.2%) and Arweave (AR - +5.5%). 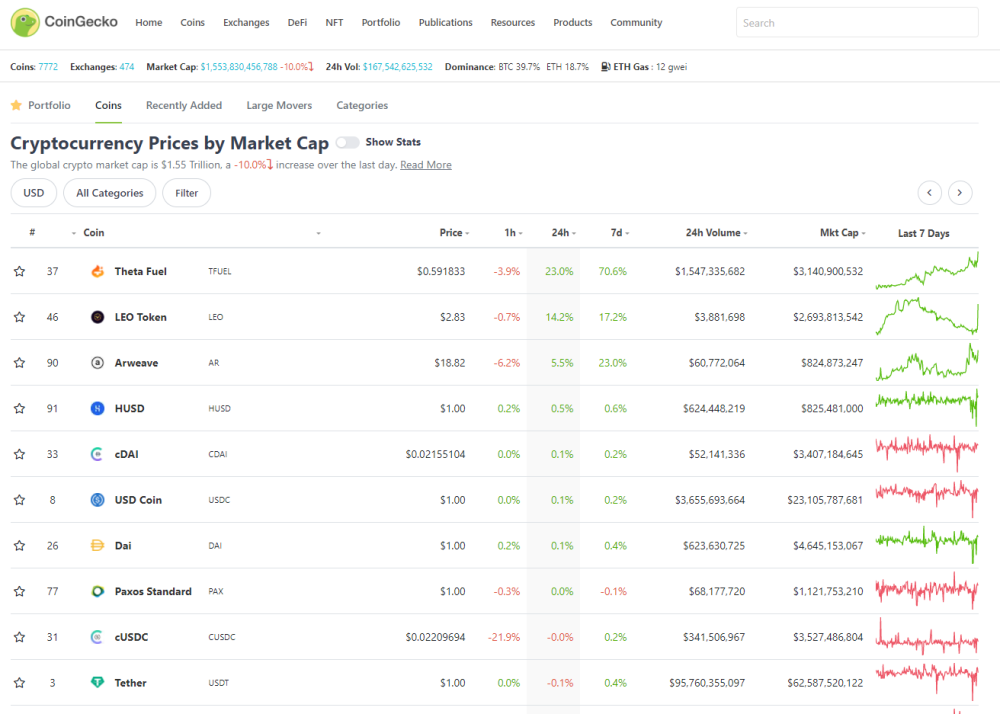 As mentioned previously, TFUEL had experienced the highest 24h gain within the top 100 according to market cap at 23.0%, which is very surprising. The surprise comes from a variety of reasons, but one of the main ones include the crash TFUEL has had over the past weeks, falling by about 50% during both April and May, the falls having a recovery period in between. TFUEL recently broke its ATH (All-Time High) about an hour ago, which was $0.614230, and this can be another reason for the surprise in TFUEL's surprising gain. 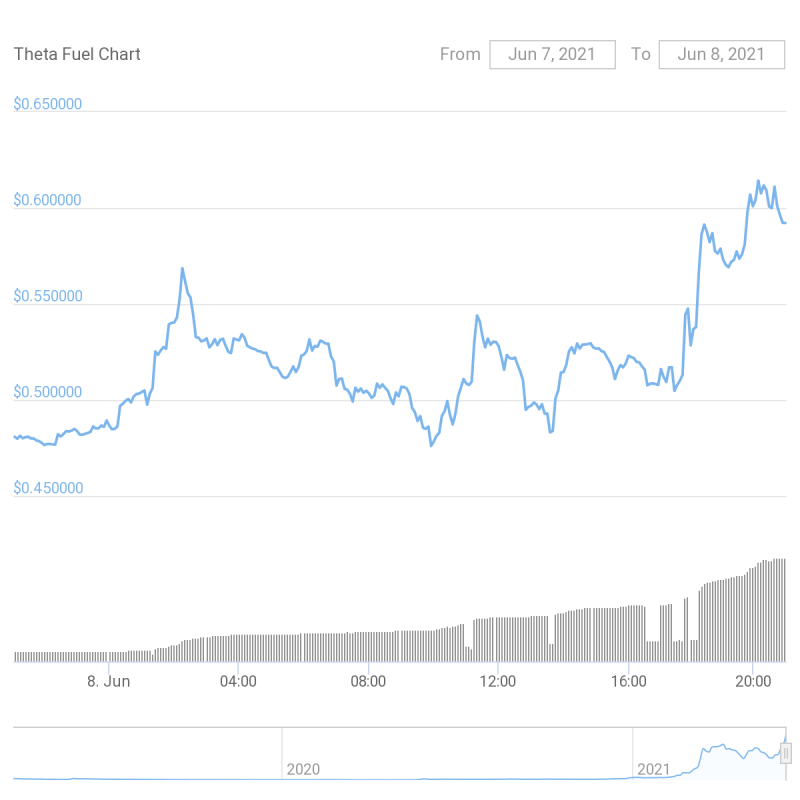 The most likely reason for TFUEL crazy gain over the last day is the influx of crypto investors, looking at making quick cash in the middle of the market crash. One person sees an opportunity in TFUEL and sends a whale to buy, then another, and so on until there is a mass buy of TFUEL that boots the price up. This is visible in the CoinGecko chart attached below on TFUEL, looking at the volume trend over the past 24 hours. What is important to notice the great gaps between the TFUEL trend, and this is probably whale sells, satisfied with their gains and cashing in their market crash profits.

A significant event is approaching for TFUEL, expected to start at the beginning of next month - July. This is the release of THEAT mainnet 3.0, the main features 'Introducing TFuel Staking & Uptime Mining.' The approach of such an event may have played a role in the bullish trend of TFUEL, especially over the past fortnight as the countdown goes through the final month. Scrolling down the countdown page, a headline is shown, which present a significant aspect of the Mainnet 3.0 update not mentioned earlier: TFUEL burning and increased transaction fees. Burning reduces the supply of TFUEL, so this would increase the price if the demand remains constant or rises. Higher transaction fees mean more TFUEL is being used to run the blockchain, and so also pushes the price up as there is more TFUEL circulating, not staying in people's wallets unused. 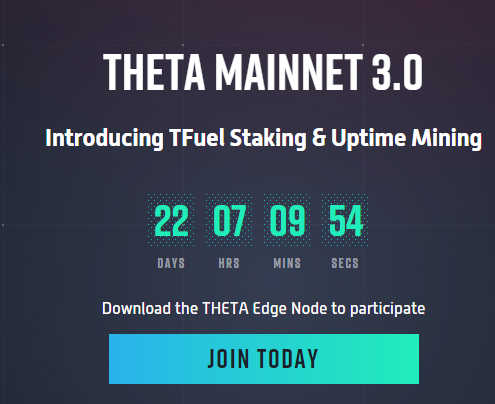 CryptoPotato - Ripple Price Analysis: XRP Tumbles 9% Daily But Is The Selling Over? - https://cryptopotato.com/ripple-price-analysis-xrp-tumbles-9-daily-but-is-the-selling-over/ 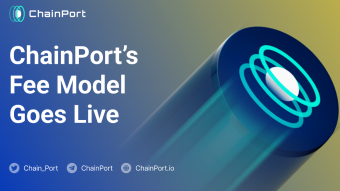 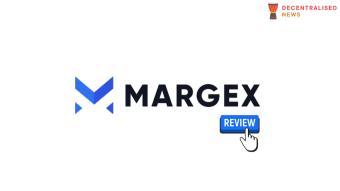