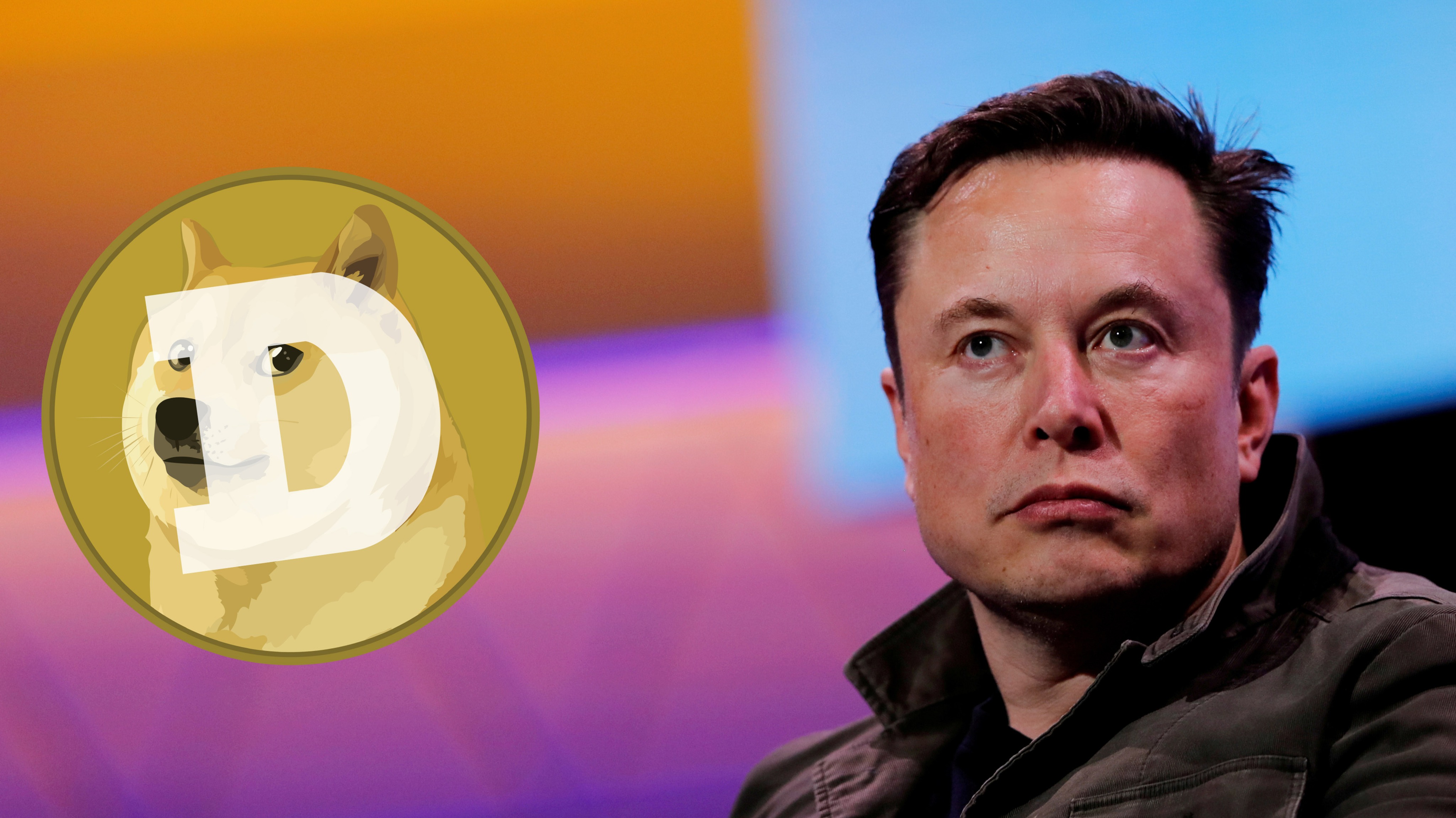 Bruce Fenton, the claimed lead developer of DOGE, has publicly announced that Elon Musk has not contacted any DOGE team members, going against Elon Musk's claim that he is working with DOGE developers.

Two days ago (May 14) at 8:45 AM, Elon Musk publicly tweeted on his verified Twitter account that he is working with the DOGE developers to improve system transaction efficiency for the DOGE blockchain. He also added that it is "potentially promising." The tweet is shown below (https://twitter.com/elonmusk/status/1392974251011895300)

However, on Twitter account Bruce Fenton, it is claimed that Elon Musk did not contact any team members of DOGE. He mentions that DOGE has a development system called "ossified preserved statefullness," the DOGE team satisfied with the current situation of DOGE. Fenton told Elon Musk that if he wanted to suggest improvements on the DOGE blockchain, he can do it through a DIP (DOGE Improvement Proposal). The tweet of this is shown below (https://twitter.com/brucefenton/status/1393687876144148493). 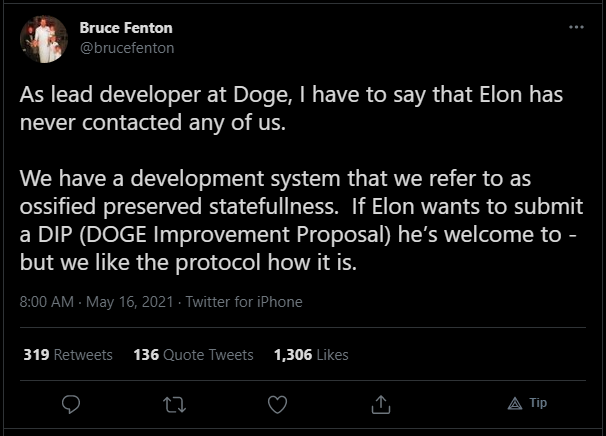 With the Twitter account Bruce Fenton, personally stated that he appointed himself as the lead developer of DOGE today. Although this may raise questions of Fenton's identity, it appears to be a legitimate announcement and account, suggested by the comments of the thread and the overall feel of the Twitter account. The announcement is attached below (https://twitter.com/brucefenton/status/1393756443132645376).

What is even more interesting is that Bruce Fenton claims to have never heard of Elon Musk until this week, or what it seems to be. Inside the thread of Fenton's announcement, he replies to an account about not hearing a person until this week, though the identity of the person is not specified, the parenting account no longer existing. It can be assumed to be Elon Musk from the nature of the reply and the fact that Fenton uses "him," narrowing it down to a male. The reply is presented below (https://twitter.com/brucefenton/status/1393688984602165250).

Although the post seems to be going against Elon Musk's claim and advice, being an anti-Elon tweet, Fenton mentions further down the thread that this is a pro-Elon tweet. Fenton opens Elon Musk for proposals of DOGE for the DOGE team, claiming that they will be carefully considered, suggesting a good relationship with Elon Musk. This was a reply to a comment implying that the tweet was an anti-Elon tweet. The reply is provided below (https://twitter.com/HalloFeld/status/1393690148836188162). 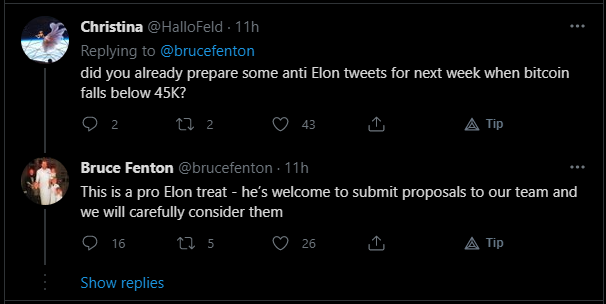 To put the case in summary, Bruce Fenton, the now self-appointed lead developer of DOGE, goes against Elon Musk's claim of collaboration with the DOGE team in improving DOGE but is wide open for Elon Musk to make any suggestions about improving DOGE.

What Is Elon Musk Up To?

Elon Musk is known to create activity within the crypto world, which is argued by some as a positive influence, but by others as a negative influence. Whatever opinion you have, it is most likely that this week is the most active Elon Musk has been with the crypto market, creating perhaps his greatest influence in his history of influences. Elon Musk likely contributed to the recent crypto market crash with the denouncing of Bitcoin (BTC) and the removal of BTC payments for his company Telsa, which for those who do not know, is known to sell good quality electric cars for a greener Earth. The tweets regarding BTC this week are presented below. 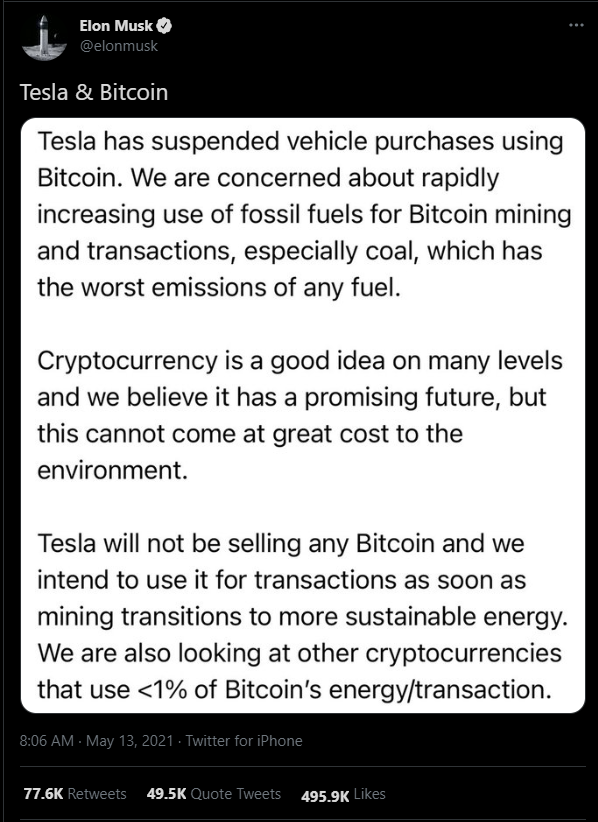 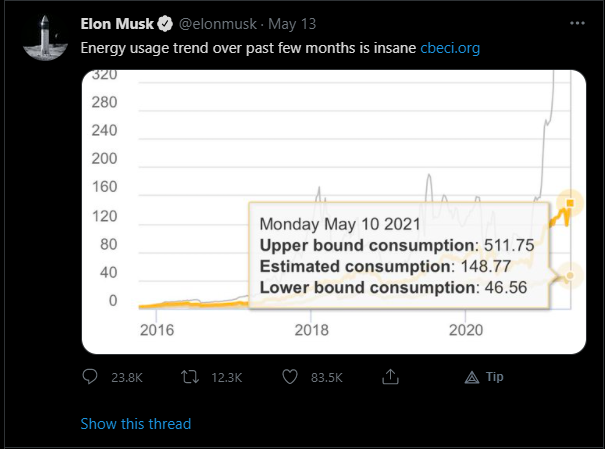 Previously, you would see Elon Musk make some tweet promoting DOGE every week or so to create some bullish trends, but now you have multiple tweets in less than a week about different areas of the crypto world. This suggests that Elon Musk has become more connected with the crypto world, possibly thinking of making great influences to it to completely change the way the crypto world works. Below are examples of tweets Elon Musk has made on crypto within this week, many still on his account (https://twitter.com/elonmusk). 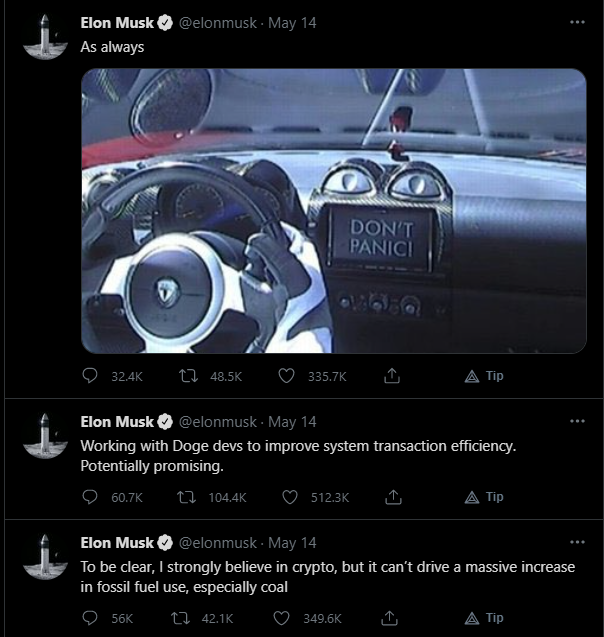 Now, a good question to ask is why did Elon Musk remove BTC payments on Telsa and denounce BTC on its energy consumption amongst other tweets? We know that Elon Musk is no imbecile - he is a billionaire entrepreneur who owns aerospace company SpaceX and Telsa - so why does Elon Musk do what he did now? Why not before? Why not later? This is a great question to think about, and it indicates even more large movements for the future with Elon Musk. Elon Musk may get Ethereum (ETH), Binance Coin (BNB), and even XRP (XRP) into the mix of his influence, but who knows? It could also be Cardano (ADA), which has become bullish over the past few days, linked to Elon Musk's criticism on BTC energy use. Just consider this when going through the arguably crazy things Elon Musk is doing. It seems to only be the beginning, much more waiting to come.

CryptoPotato - The Dogecoin (DOGE) Copycats: Shiba Inu and 5 Others You Must Know About - https://cryptopotato.com/the-dogecoin-doge-copycats-shiba-inu-and-5-others-you-must-know-about/

Decrypt - Elon Musk and Bitcoin: No One Man Should Have All That Power - https://decrypt.co/70996/elon-musk-bitcoin-dogecoin-prices-no-one-man-should-have-all-that-power