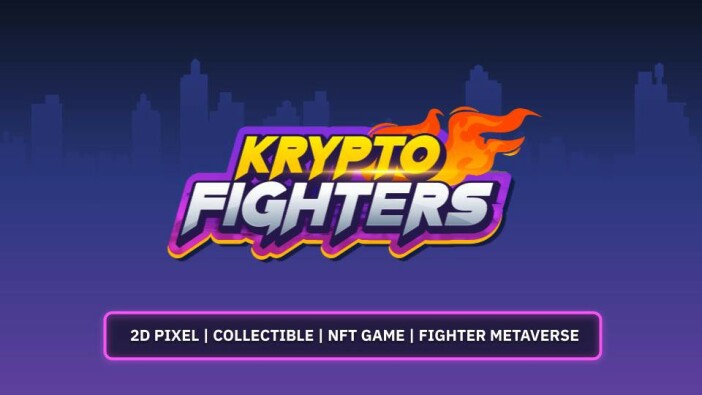 What is Krypto Fighters?

Krypto Fighters is a brand-new 2D pixel fighter-themed turn-based RPG. You may join and train your team in Krypto Fighters before sending them into fight in the game’s PvE Adventure Mode or pitting them against other players in the PvP Battle Arena and Tournament modes.

Fighterians, you’ll collect, train, and lead are more than just game characters. They’re 100% collectible NFTs that you can trade or even stake, revolutionizing the experience of comparable games while also incorporating a P2E aspect. Krypto Fighters is based on the concept of a metaverse.

The game is build around on an entire metaverse, apart from each mission in the adventure. Players can own property in Kryptopolis, which provides them with passive income, in addition to the city in which the game takes place.

Our vision: To Create a high-quality NFT game with a sustainable economy. 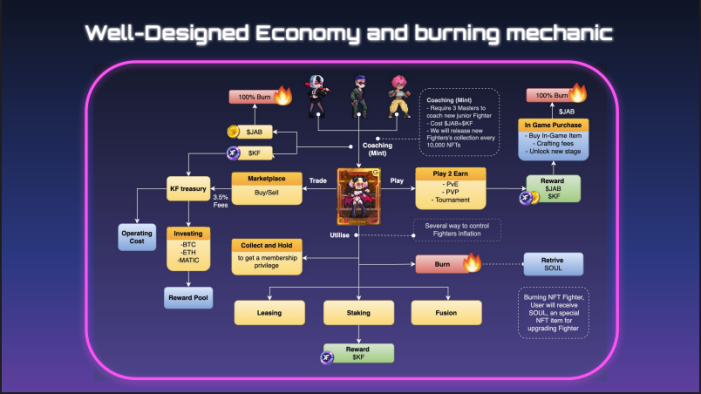 Blockchain technology, in particular NFTs, have paved the way for a breakthrough evolution of games and their ecosystems, as is becoming obvious across numerous gaming metaverses. Games are beginning to provide players not just a remendous amount of entertainment, but also the opportunity to earn as they play. All of this is now possible thanks to the Polygon blockchain technology we employ.

Whereas games used to be primarily a source of entertainment, relaxation, and socialization, they’re now becoming an opportunity for players to generate income through in-game items like as NFTs and tokens, due to NFT games backed by blockchain technology. These tokens may then be traded on the marketplace or staked on the Polygon blockchain to help keep the network healthy. Not to mention Krypto Fighters’s buildings are available for purchase.

Despite the fact that NFT games are getting more popular, they remain pale in comparison to the whole gaming business. Our goal is to create an excellent, stable, and ever-evolving blockchain game that gives everyone in our community an equal chance to earn assets while enjoying the game.

Our three fundamental pillars below represent our mission:

Community as a digital nation

Any assets acquired by our members will be fully owned by them. We’ll also take all feedback, suggestions, and participation carefully in order to make Krypto Fighters the best game it can be. Our community members are valued citizens of our digital nation.

Our vision is to foster a fair, balanced, transparent, and self-sustaining environment in which all participants are encouraged to be incentivised with assets while playing which is our commitment to the community.

We identify as enthusiasts of a wide range of turn-based games, so we understand the intricacies of our project, so you can rely on us to make no corners as we work tirelessly to create a fantastic gaming experience for real aficionados like ourselves.

Since the beginning of our journey as gamers, it has been our dream to create an ecosphere where players communicate, compete, grow, and enjoy the world of their choice together.

Krypto Fighters is a blank slate project inspired by some of our favourite games of all time, such as Street Fighter, River City, and Grand Theft Auto. It means everything to us to see the global community fall in love with our Fighters as much as we did when we created them. We firmly think that by working together, we can build a game-changing IP.

The NFT characters of Krypto Fighters 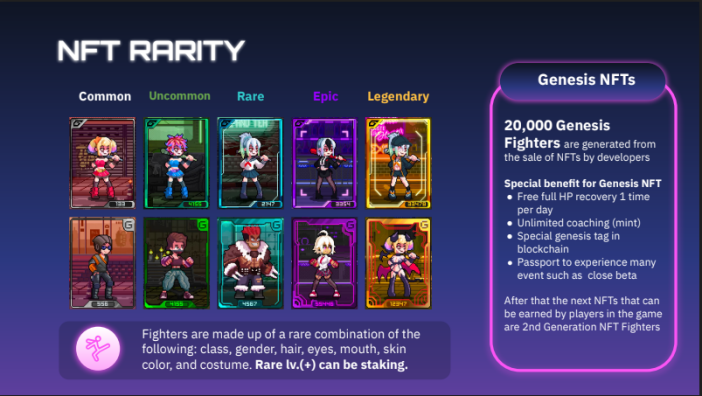 Without the Fighters, Krypto Fighters would not exist. Each of which is not simply a beautiful work of 2D pixel art, but also an NFT with a unique ID backed by the game’s blockchain. Each Fighter can be one of eight distinct classes, each with its unique set of skills, abilities, and combat role during battles.

Even fighters of the same class will have diverse skills, allowing for a broad range of group compositions. Each Fighter class will have a pool of skills that will be allocated to Fighters at random when they are formed. Fighters will acquire one to three random talents that cannot be modified, depending on rarity.

Fighters can be gained in one of two methods. To begin, the marketplace will be seeded with 25,000 “genesis Fighters” that players will be able to purchase through randomised loot boxes. This implies that the first batch of Krypto Fighters characters will be available to about 6,000 people. Additional Fighters are generated as a result of the game’s ecosystem.

That’s where coaching comes in. After a Fighter has properly leveled up, they will be able to “coach” new Fighters, which will place freshly minted Fighters on the blockchain as well as in the game. 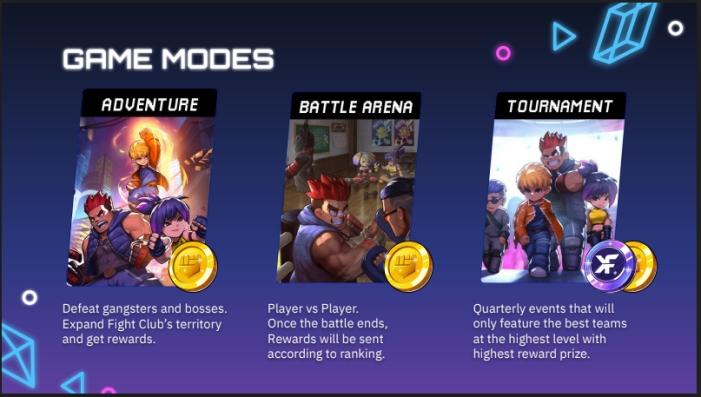 Combat in Krypto Fighters, being a turn-based game, entails taking a group of four of your Fighters and attacking in turns until either you or the enemy is defeated. The positioning of your characters is critical. Characters on the front lines are usually attacked first, although certain abilities let you to shuffle positions or target specific enemies.

The Gut System, which reflects each character’s willpower, is important to Krypto Fighters’ turn-based gameplay. Consider it similar to the stress mechanism in Darkest Dungeon. Willpower is drained every time a Fighter misses a hit, receives too much damage, or sees one of their allies fall in combat. If the Fighter loses too much willpower, he or she will become weary and unable to battle.

PvE (Adventure Mode) — In Adventure Mode, players venture deep into the game’s city of Kryptopolis, where they will encounter a wide variety of gangsters, whom you will attempt to defeat in order to gain territorial control of the city, building your reputation and expanding your Club as you progress. Take note, however, that you cannot swap any members of your team of Fighters during each adventure, so make sure you’re properly trained before embarking. 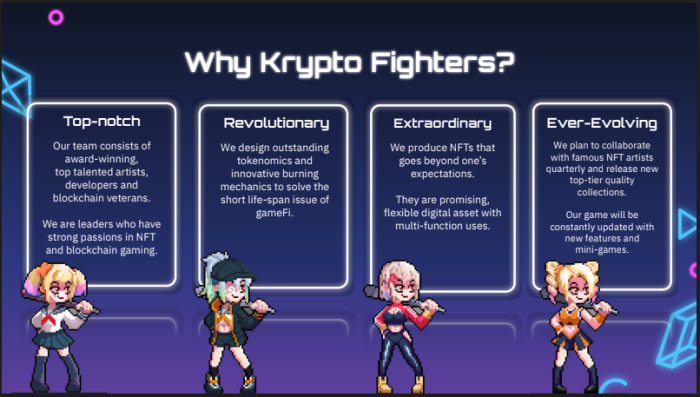 Krypto Fighters distinguishes itself from other NFT games in various ways. For beginners, the turned-based gameplay has been fine-tuned to be as challenging and strategic as it rewards the players. After forming a team of four Fighters, players must master the intricacies of battle if they are to succeed.

The collectible nature of Krypto Fighter’s 2D characters is the next point to mention. These stunning NFT pixel-art works can be earned, trained, and then sold to other players on the game’s marketplace. These tokens can also be staked for a reward on the Polygon blockchain.

These Fighters, however, do not exist in a void. Another factor that makes Krypto Fighters appealing is the game’s overarching metaverse created at the foundation of the game. They reside in Kryptopolis, a living, breathing city. There, gamers may leverage their own Gamefi experience to generate additional long-term business by owning and operating businesses such as stadiums, hospitals, or gyms. Outside of the strategic turn-based combat, there are several additional methods to progress in the game.

The highly skilled team at Maxma Games that is working hard to bring Krypto Fighters project to life. With years of expertise, the team aims to create a reliable and quality blockchain game allowing the community equal opportunities to earn assets while enjoying the gameplay.

What’s the plan for Krypto Fighters? 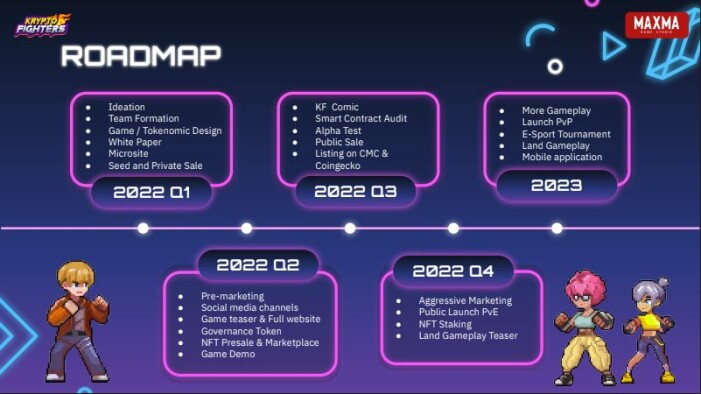 We’ve detailed our 2022 roadmap in order to chart the way for all Krypto Fighter development until 2023. A brief demo is scheduled for the second quarter of 2022, with alpha testing expected to begin in the third quarter. Following that, we aim to launch Krypto Fighter’s PvE mode by the end of the year, followed by PvP in the first quarter of 2023. Keep an eye on our roadmap for any updates or improvements.

More about the Maxma team 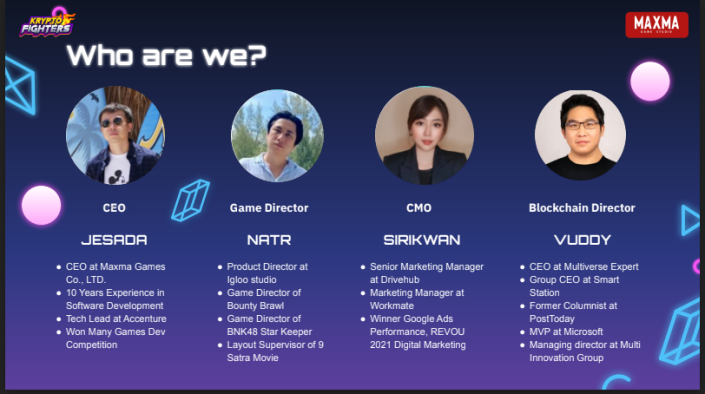 Maxma Game Studio is a startup comprising of skilled experts with lofty ambitions. Our team is made up of award-winning artists, game developers, and game designers that have contributed to various AAA game projects. Maxma Game Studio aspires to develop a high-quality NFT Game with an innovative and sustainable economic system.

The bottom line: a fun and challenging throwback

Krypto Fighters is intended to merge the classic and magnificent 2D pixel graphic art of retro years, cutting-edge blockchain technology, and the burgeoning new sectors of Gamefi and metaverse gaming to create something revolutionary.