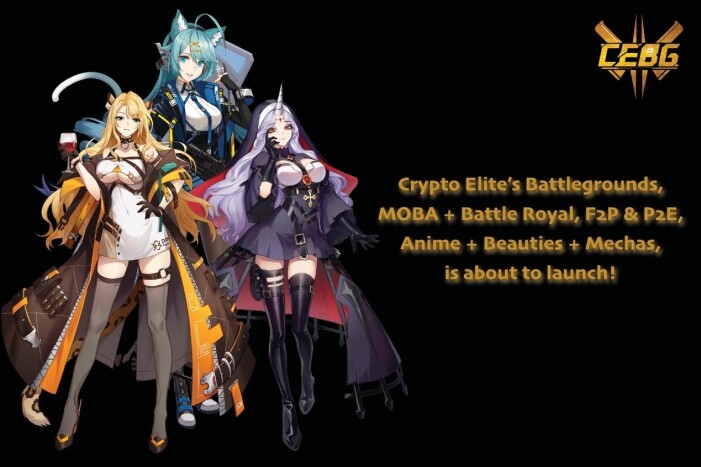 Crypto Elite’s Battlegrounds (CEBG) is an NFT – GameFi ecosystem built on the Binance Smart Chain. It is a P2E and Free-To-Play mode, and it is the world’s first blockchain game where the players use NFT weapons and items to fight against their opponents in a MOBA + Battle Royal style of gameplay, presented in an anime style with beauties and mechas.

CEBG is played by up to 40 players on a predefined battlefield, teams will compete against each other by collecting supplies and weapons and eliminating opponents to become the last team standing. Each game lasts about 15 minutes, perfectly fitting in the fragmented leisure time of every player.

CEBG will be launched on the heels of an experienced, professional, and prestigious development team that has been dedicated to the game industry for a long time. The core members come from world-known top gaming companies, aiming to bring players a high-quality GameFi project that no other project in the industry can compete.

They have formed strategic cooperation with Multiverse Play guild, the new-borne and powerful DAO that empowers the drive of consensus, bringing more than 40k players in SEA and more than 200 popular game streamers to join CEBG.

CEBG leverages the high-throughput, low-cost BSC to deliver high-class gaming performance and in-game asset support. Essentially, CEBG is a user-centric gaming endeavor that is committed to developing the world’s first blockchain game to disrupt the booming GameFi industry via a well-developed game design and a balanced economic system.

Specifically speaking, the core team of CEBG is the very tokenomic designers themself of the game, so as to deliver a sophisticated tokenomic design and a sustainability-driven economic system. By the delicate balance between CEG (in-game token) and NFT sales, the team shows the team's determination for a long-time operation.

By successfully launching the game beta, CEBG will publish the game with tokens listed on DEX this coming February, following new function releases such as PVE mode, PVP ranking system, NFT level-up scheme, and the launch of mobile version on Apple App Store and Google Play. The mobile version of the game will surely satisfy the time-spending needs of users during fractional time.

As 2022 continues, the team will bring endorsement from famous esports players and introduce a 3D version of the game.