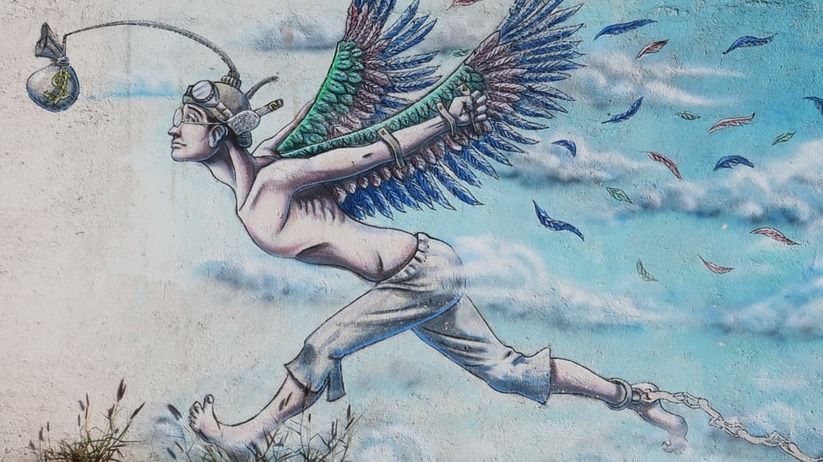 Life is cyclic, so a state of equanimity is the result on average. There will be downs but there will also be ups. When you realize this, you naturally find that the ancient Sanskrit Bhagavad Gita was right when it said a wise soul is not disturbed by distress or joy but remains equipoised throughout.

Take the global economy as an example. Capitalism is actually designed with booms and busts built into it. Knowing this a wise investor is completely aware that their investments will go through times of bullish as well as bearish momentum. Usually the cyclic nature of the global economy meant that an “uptrend” would be followed by a recession every 8 years on average for the past century. Recently this cycle has stretched to ten years and since the 2008 global financial crash and recession, the economy has tried to climb back up, and appears to have done so in stocks and bonds, reaching historic highs, amazingly enough.

But as any wise investor knows, the reversal in the global economy was inevitable, it was just a matter of when. Well now is the time. The time has come and the next global financial crash and recession has arrived. It was a little later than usual, thanks to being artificially kept at bay by the recent “post-capitalist” ad lib strategy of the finance industry, where QE, unsustainable mega-debt, negative interest rates and other such never-before-imagined tools are being brought out of the toolbox to experiment with, while we act as the guinea pigs.

You can’t stop a disaster whose time has come. Historically it is the debasement of currency that has led to the fall of empires, time and again. In a must-see video series in 10 episodes, called The Secrets of Money, Mike Malone tells the story of money and how the coin of the Byzantine Empire, (Eastern Roman Empire) which is today Istanbul, used to be the pure gold Solidus. It survived longer than the Western Roman Empire because the Romans eventually began debasing or melting down their own coin and diluting the gold with copper, etc, to stretch the coins or mint more of them. It led to their demise soon after as the greatest empire in Eurasia at the time.

Nowadays, by constantly printing more and more paper fiat dollar bills, the Fed and the American government are diluting the value of their currency in what is a classical inflationary model. As a result the dollar has literally lost 95% of its value or purchasing power over the last 100 years or so. The dollar is losing value daily, that’s why you can buy less and less with it over time. But that is how the financial industry and government has designed the capitalist system. In other words they are knowingly using a built-to-fail system because they know that with it they can squeeze wealth from the masses like toothpaste from a tube, in a “trickle-up” economic system that will last a century or so until it has to – like any classic Ponzi scheme – implode on top of those on the lowest rung of the pyramid.

Well at present the lowest rung of the pyramid is the 99% of us, since the middle class is being erased and we’re left with the super rich 1% versus the poor 99%, while wealth redistribution is reverse engineered to act like a giant scooping net for those illegal giant fishing trawlers that are creating dead oceans. That’s basically what happens every time there is a global recession like 2008 and 2019. Over a period of two or three years the poorest are forced to lose their homes as mortgages default, lose their jobs as companies go bust or retrench and lose their life savings as stocks and other investments crash. This time and in coming years it will also wipe out pensions.

“Baby boomers” are due to get hit hard this time around. The music is about to stop and the chairs of pension schemes they wanted to fall back on are being stolen like pots of honey by the financial elite in big banking and big investment institutions. They tried reinvesting your money but the cycles of planet ponzi caught up with them. They still made massive pay checks and bonuses but your money is gone. Your forefathers kicked the can down the road by living on such massive debt and now the buck is about to stop – with you. That’s what government and big debt is – living large and passing the bill to your descendants.

Now let’s look at Bitcoin and cryptocurrency, where cycles are obviously just as prominent and usually even more volatile. So when a wise crypto “hodler” or trader sees the sudden recent massive drop of around 15% in Bitcoin price over the past week, they remain equipoised and unphazed. FUD cannot move them from their equanimity and confidence in the future of Bitcoin and the safety of their investments. Even the hash rate may suddenly fall a massive 40% overnight from its ATH, yet the wise investor knows that this is neither a cause for concern nor lamentation as it will bounce back up just as fast.

New ASIC miners are coming online to replace the older, less efficient models that were just taken off line now. Now Bitcoin miners can reap a higher return on their mining operations, despite the price drop. So the hash rate is up again, and I do like the smell of good hash in the morning. Bitcoin may even have some more downside to come and that is fine because in the past decade it has only climbed and the overall bull run has never disappointed. Slow down it might, over the coming years as more and more Bitcoin is mined and we near the 21 million total Bitcoin in existence, but until then price will keep climbing, albeit at a slightly less parabolic curve as time goes by. Eventually price will stabilize at its natural market value as determined by the market of buyers and sellers. Whales will be less able to manipulate price too, which will add stability and massive benefit as a use case for “store of value” and other services.

So Bitcoin’s future is looking bright while all else around us may be less so. The cycles will play themselves out and some empires will fall as others rise accordingly. All the while Bitcoin will power forth on its one way ticket to the moon. I hope you’re also on board.

(Article also appears on my other blog site)