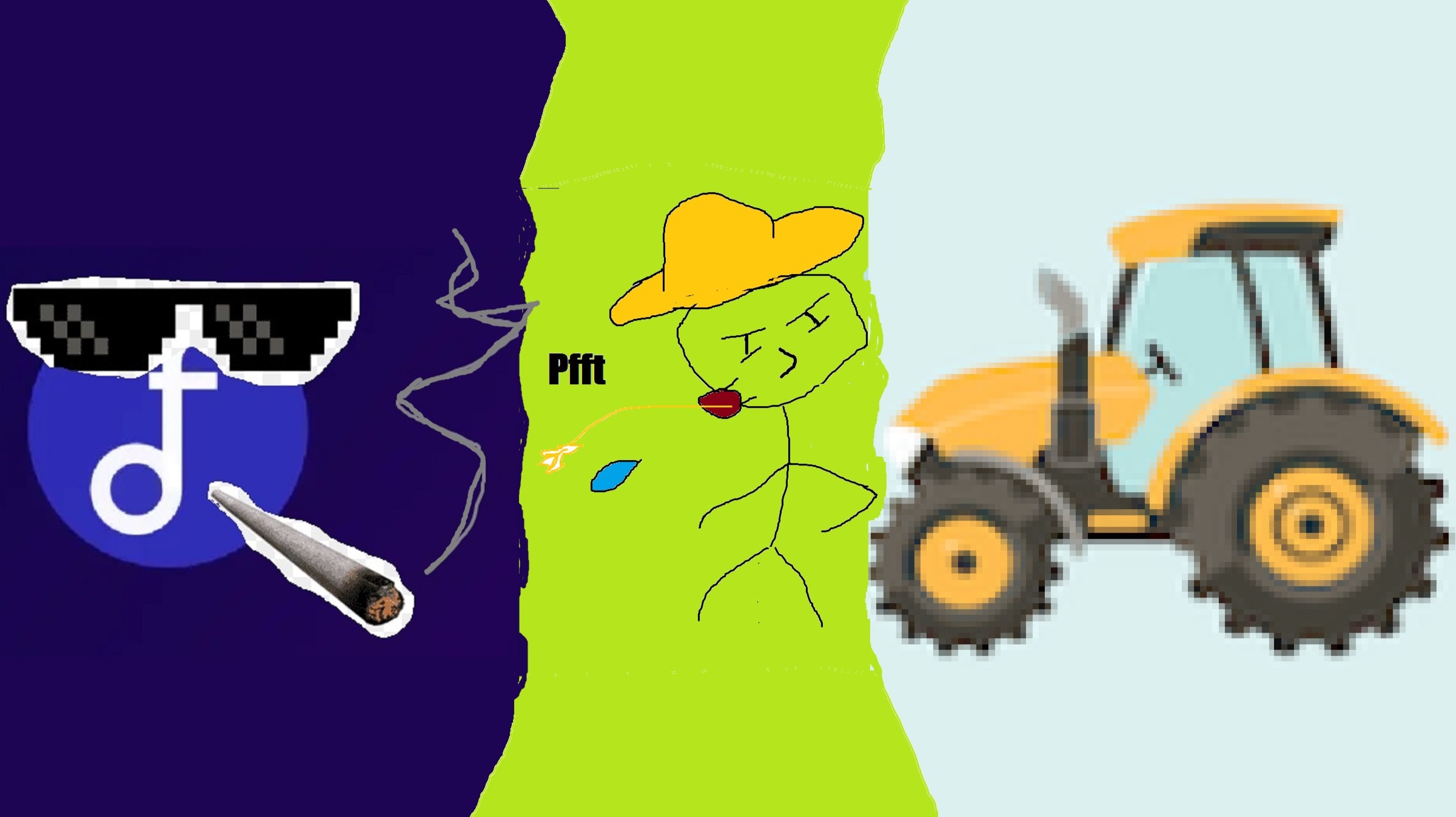 Go ahead and put your eggs in this basket

I remember when I was still a crypto noob and didn't really know what DeFi was. I had just bought like two hundred dollars worth of real Bitcoin (not that Robinhood or eToro crap, I mean), and I was trying to find a Tron faucet because it seemed kind of hipsterish. I didn't want to use an exchange because it was too daunting, and the bitcoin that I had kind of felt like both too much and not enough anyway. Around that time, everyone on the cutting edge of cryptocurrency had just been airdropped 1200+ USD in the form of a unicorn token, just for using some swapping app. Wow. What? That sounded awesome! My big jew nose smelled money. Since I didn't own a significant quantity of ETH, I had not yet used Uniswap, but you can darn well bet that I went and fomoed into a liquidity pool some time after I heard about that epic airdrop. To this day, actually, I haven't removed my ETH-USDC liquidity from Uniswap. Oh, the impermanent loss... 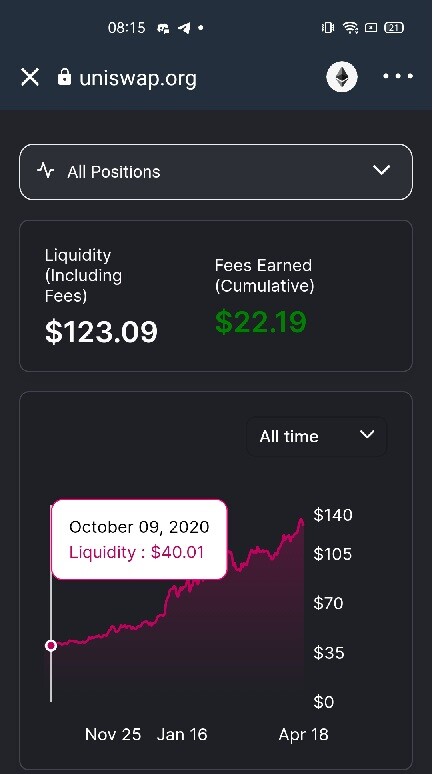 Can't really complain, though. Even with that IL, my LP token did a 3x in half a year. On October 9th, 2020, the price of ETH was about $360, so that ended up doing a 6-7x in the meantime. Since only half of my initial liquidity was in ETH, that's only something like 1.5-2x that I missed out on (if I were to withdraw the liquidity now). Not too bad, all things considered.

The liquidity shall remain in Uniswap until I don't have to pay the entire worth of it in fees...

Remember, though, that as the value of ETH (and BNB) increases, so does the dollar value of the gas fees that we have to pay. It looks like a lot more, but in terms of the native currency, it's not that much more.

If you could go back in time and tell yourself something that might make you rich... your greasiest high school classmate might just end up married to your mom. So don't worry too much about what you could have done. 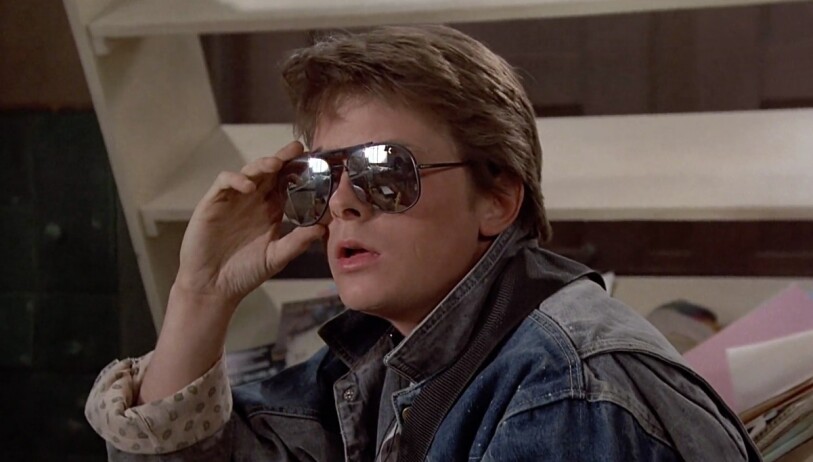 ANYWAY, the reason I brought that up is because Harvest.Finance was getting popular on the Ethereum chain around that time as well. If I had stuck my $40 LP token in a vault back then, I would probably have accrued at least that much in FARM right now, but I was too busy being a Robinhood/Cointiply noob to invest some energy into figuring it out (it's not very hard, you just need to do it).

Not wanting to miss out on the harvest this time around, and now being very comfortable with using a smart contract-enabled blockchain, I wasted little time finding something that I could stake on Harvest.Finance.

I noticed that Harvest offers a single-asset vault for EGG that was getting a very nice APY, so I took my 0.6something EGG out of Goose.finance and moved it. I just noticed yesterday that, with their new strategy, Goose gives you a slightly better APY, however you don't get any FARM that way, and after losing a little bit of my EGG to their scammy "layered farming" gimmick, I decided to just leave it in Harvest. Besides, FARM represents a share of Harvest.Finance, which is kind of a household name to those that have been in crypto for a while, and their service has been consistently good.

Since EGG has now kind of (?) passed the price-discovery phase in its lifetime, it might just net you some gains if you do decide to buy some. Not financial advice, but if it were, I would probably stick it in the BUSD liquidity mine to get the 2K+% APY. As long as it's in a pool with BUSD, you wouldn't be losing any BNB, and you would buffer some of your risk with the stable half of your liquidity. Then again, if you expect a Goose resurgence with their newest GUSD gimmick, maybe you would rather stick it in a BNB pool instead. If you can't decide, and the concept of impermanent loss freaks you out anyway, then there is always the option of just staking it in the single-asset vault. Thanks for that option, Harvest Finance! 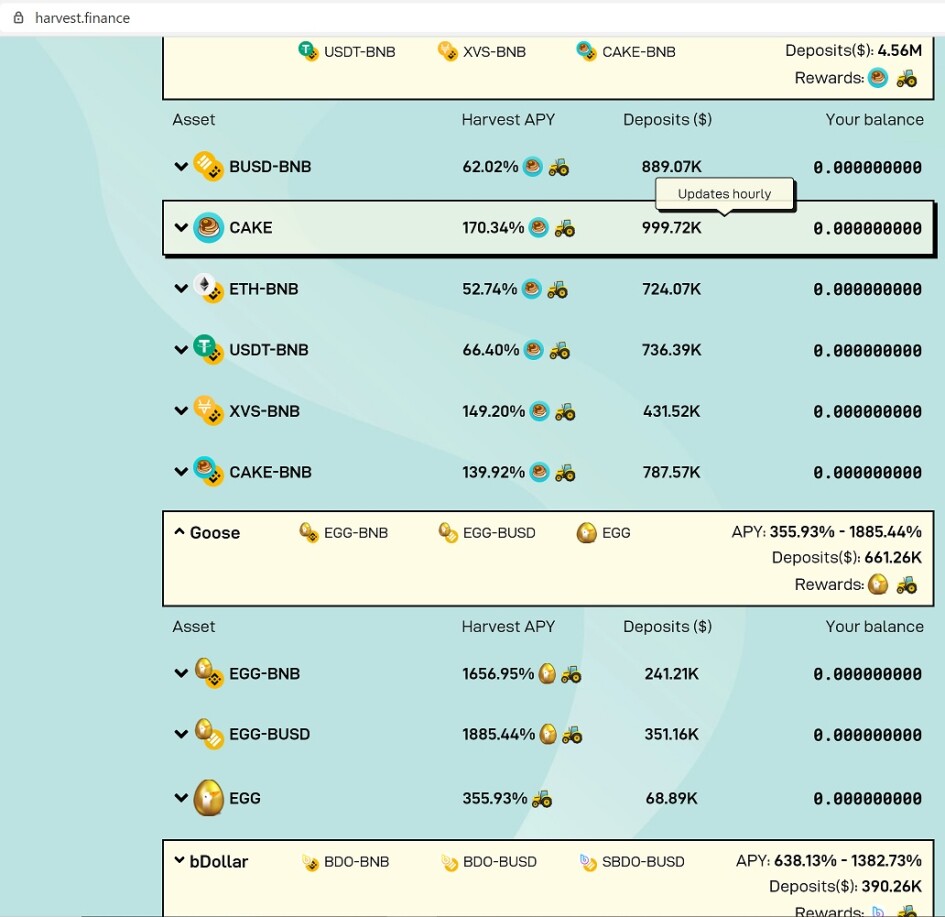 Maybe you're not a degen, though, and that's okay. In terms of other options, the single-asset Cake vault looks like a really good one, too. I might just have to move some Cake in there next time I decide to compound my stack... It gets among the highest yields in pure, auto-compounding Cake that I've seen in the space, and you get FARM coins to boot!

I have some BDO/BUSD liquidity staked in Autofarm, and I would definitely consider moving it to Harvest, but I honestly don't know if I would recommend BDO to anyone. It sounded like a no-brainer before the "stable" dollar dropped to 60 cents and didn't come back up... If you expect it to go back to it's dollar peg, then getting in now would be a great idea, but I don't know what it's going to do. Either way, the interest on your liquidity is solid.

Staking on Autofarm was a pretty good option last week, but I've been a little less happy with their services recently. FIRST we had to migrate our funds to their second-generation Venus vaults that are supposed to get higher interest rates than the V1 vaults but did not actually get higher interest rates, AND THEN WE STARTED GETTING NEGATIVE INTEREST IN THOSE NEW VAULTS. The story is that Venus started charging some extra fees, but, oddly enough, Autofarm is the only platform I know of that started getting negative interest. Should have used Harvest instead.

In fact, the Venus vaults on Harvest appear to still be a very good option, and they are all single-asset vaults, which saves you the trouble (and gas) of putting some assets in a liquidity pool.

To be fair, I bet Auto got hit with the fees because it compounds more often (it's 'hyper-optimized', after all). Not totally sure, though. Besides, every other yield farm and it's mom did a V1 to V2 migration (besides Harvest, I mean).

The Venus-Autofarm vaults on Swamp.finance were affected by this recent glitch as well, but I am liking that platform a lot more anyway. It's certainly not as widely known and audited as Harvest, which makes it potentially more risky, but, hey, I gotta trust the cute green squid monster.

But, yeah, as far as I know, Harvest didn't have the Venus problem AT ALL. Shoot, I don't think they even paused deposits or withdrawals to their vaults. Hahaha, Harvest hasn't had ANY problems that I know of since a lot of people started using it!

And, you know what? In scammy crypto space, more than half a year of smooth sailing really means a lot.

P.S. This will also be shared on Torum. You should check it out while you still have a chance to score some XTM for engaging with the website. You will definitely be able to convert XTM into FARM (or anything else that your heart desires) at some point in the not-so-distant future.