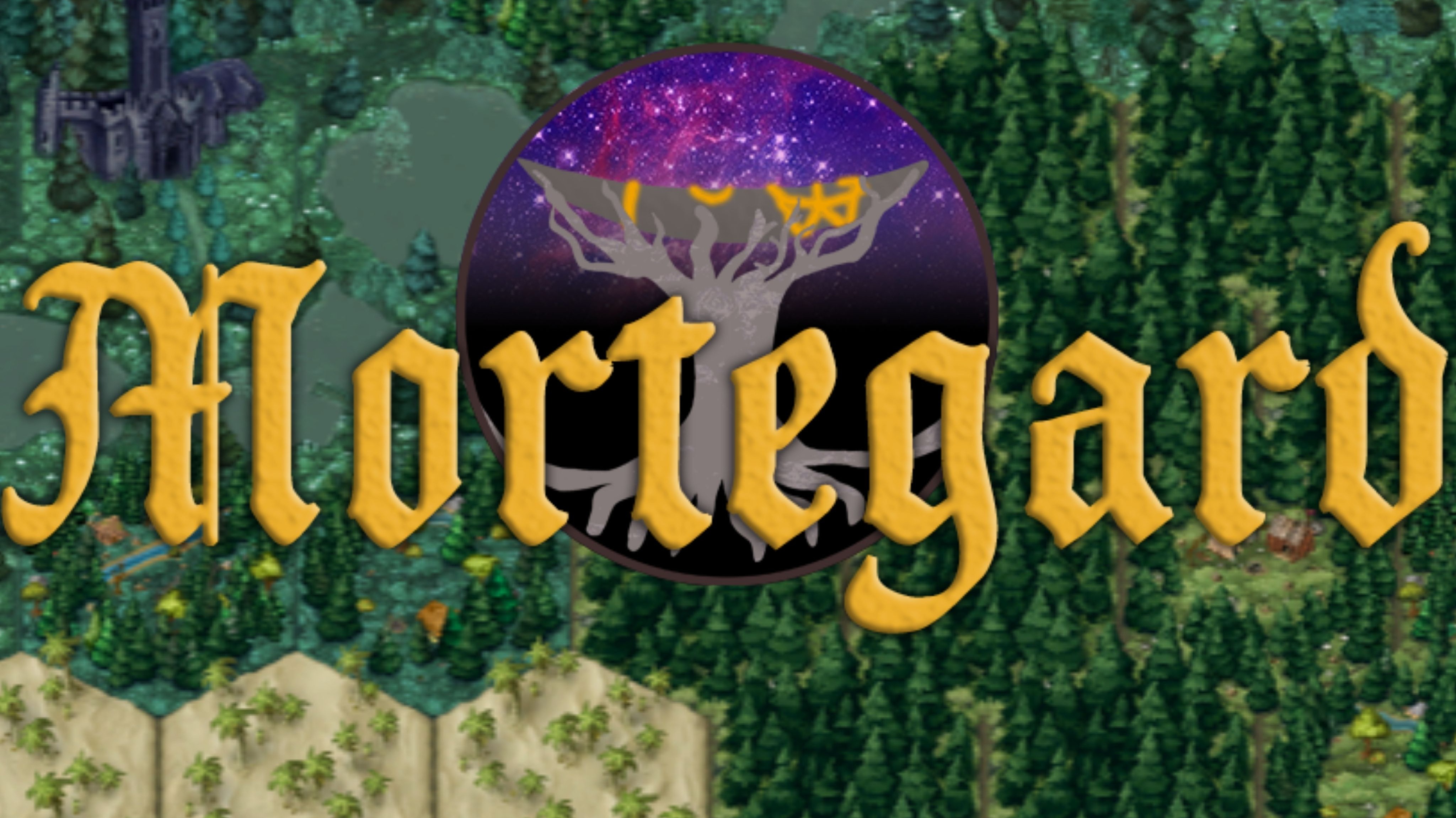 I pulled CryptoB away from his work creating tile art for the latest castle to answer a few questions. He is the most regular voice of the development team in chat, a community leader and the "swiss army knife" of the Mortegard team. Mortegard is a Fantasy World Simulator built for the Polygon Network. Players own castles, build kingdoms and control the surrounding land as Rulers. The land produces tokenized resources and the production can be improved by crafting (minting) development cards'(ERC-1155 NFTs) with the resources harvested. There are live role playing events that dramatically shape the world and story. Events also earn limited release rewards. Resources are tradable on Uniswap and the NFT collection is on Opensea. 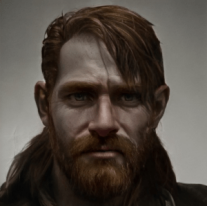 Hi CryptoB, so over the past couple of months you and I have chatted a lot in Discord. I've been pretty amazed at how active the development team is in chat. I think we both feel that Mortegard needs a bit more time in the limelight and I realized I have a bunch of questions even though I'm following Discord daily.

How would you describe your role on the team?

I'm what you would call the 'everything else guy'. Basically if there's something to do that needs doing, I'll figure out a way to do it. The majority of my time has been filled with doing the tile art and assembling cards, but as I'm starting to get on top of that, I've moved onto doing more on the website, balancing, writing, outreach etc.

Could you tell me about the strengths and roles of the other team members?

The beautiful thing about our small team is that each of us is really capable of filling many of the roles. Beef is our artist, all the gorgeous card art and and castle art is thanks to him. He also writes, and runs the twitter with myself. Sillac is our programmer. The entirety of the client, including the UI is thanks to him. He also writes and does the balancing. We all share a lot of responsibilities like marketing, planning, ideas and direction too.

We set out from the beginning to make Mortegard different from everything else out there. For one we actually have a game already(shocking, I know). I feel like I could write forever about all the things we're doing differently, so I'll pick three:

What is the setting for Mortegard? I saw a lot of new material in the Lorebook. It looks like the worldbuilding is in full swing!

Mortegard is set in the wake of a cataclysmic event in the world that shares the games namesake. The equilibrium of the four great nations has been shaken, leading to new opportunistic rulers to take a foothold on the land. The players take the role of these new rulers in the world. Already they have proven they won’t sit by idly and let themselves be walked on by the great kingdoms.

So Mortegard is a fully functional game, no waitlists or pre-sales?

Correct, fully functional and ready to be played right now! We’re of course continually improving on the game and adding more features.

Can someone get started today? How much does it cost to become a Ruler?

They certainly can. The Mortegard team has one type of castle left in stock - The Hinterland Settlement, highly detailed and an excellent entry level option at just 0.009 WETH on OpenSea 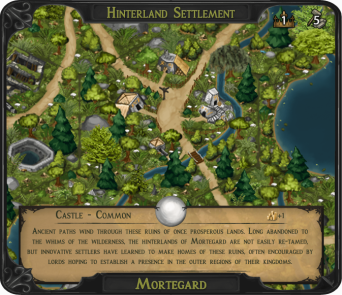 I've seen it mentioned in your chat that Mortegard is a blockchain game with tokens not a token with a game. Could you tell me more about that philosophy?

We’ve designed Mortegard as a game first and foremost, with a world steeped in lore. From there we figured out how tokens fit practically into the concept of being a ruler and to really give players that feeling. As such we’ve made a game with tokens, not a token with a game designed around it.

Could you quickly breakdown the economy/tokenomics of Mortegard in your own words?

Mortegard has several tokens - 5 resource tokens and 10 item tokens. The 5 resources, which make up the core of the economy, are produced from players with developed land. These tokenized resources accumulate passively until the ruler is ready to collect them. These resources can be reinvested to create new developments to place(or sell). Resources can also be sold on Uniswap, or pledged to story related events for the chance to earn powerful rewards.

Is there a guide or FAQ for those that want to learn more?

Sure, the best place to learn how to get started is https://mortegard.com/start 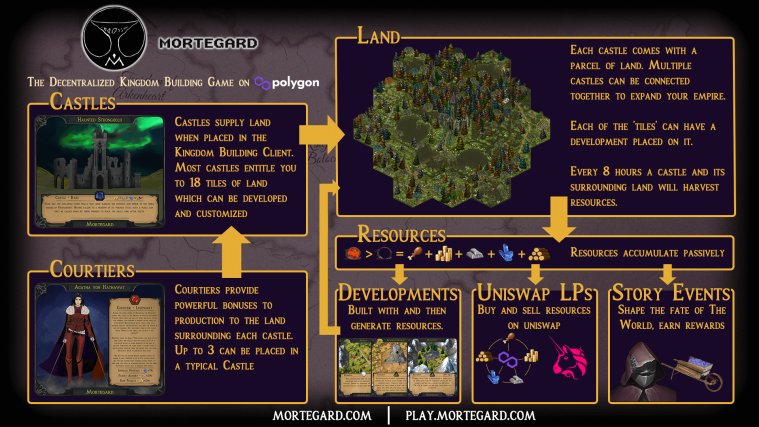 Do you have any upcoming releases or events?

There’s always a lot going on with us. We have a new castle releasing soon. As well as a story rich ARG, which will give you the opportunity to win a limited mint reward.

There's a lot of chat about Expeditions. Could you tell us more about those?

Expeditions will be a new layer of gameplay involving sending Courtiers on missions to acquire loot. This loot can then be

used to further develop your kingdom, or sold to other players. It will be a low barrier to entry for people to get started on the path to nobility.

Any giveaways or competitions people can participate in?

At present we’re having a meme contest with prizes of development cards worth approximately $40 each. Every single submission is a chance to win, so it really doesn’t hurt to jump in and have a try. We also run twitter giveaways with one due soon, so it pays to give us a follow. Our next giveaway will be legendary.

What are you hoping to see in terms of growth in the short term? Thinking the next month to the next six months.

We’re seeing a steady stream of interest based on word of mouth alone, but our marketing will really be ramping up leading towards the next major content release. At present our focus is on front loading content, we’re winding the spring back for a huge campaign over the coming couple of months. It pays to be early on these things as there are only so many castles to go around, and there can only be so many rulers vying for control of the lands.

This is amazing. I've been on the discord almost from the beginning and there is new information here. As a final thought, any artwork that is in the works that you'd like to share?

We normally keep this sort of stuff a bit more secret until we’re closer to release, but here’s a sneak peak at the biome for the up and coming castle release, still subject to change, of course.. 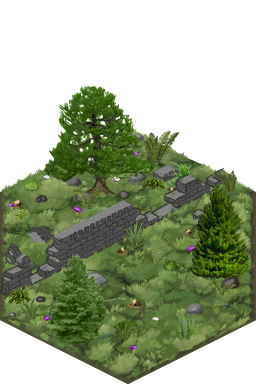 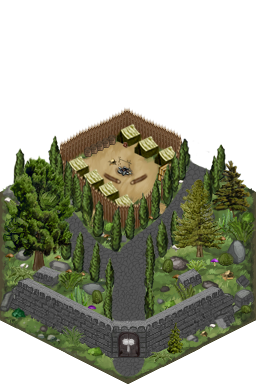 Disclosure: this is not a paid article. The author received no compensation from the Mortegard team. The author is a regular player that is on the discord a lot (too much) and a genuine fan of Mortegard.

Fly has a background in communications, a career in business and enjoys following the world of play-to-earn games.

Play to earn news and reviews from the biggest dapps to the newest releases. Play to earn or play for fun. Get your news, reviews and updates here.