Timor Zebra Finch (Taeniopygia guttata), also known as diamantino or erroneously as bengalino is a passerine bird of the Estrildidi family. 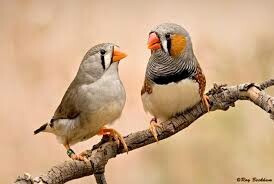 In the past, the mandarin diamond(Timor Zebra Finch) was classified in the genus Lonchura with the name of Lonchura guttata: later it was moved to the genus Poephila together with other Australian diamond species. In the twenty-first century it is ascribed to the genus Taeniopygia together with the Bichenov diamond (which some authors would prefer to place in their own genus Stizoptera, so that Taeniopygia would also become a monospecific genus with only the mandarin diamond ascribed), which in the context of the subfamily Lonchurinae form a clade with colorful diamond.

Taeniopygia guttata guttata, endemic to the Indonesian island of Timor, characterized by a smaller medium size and the absence of black streaks on the chest;
Taeniopygia guttata castanotis, of larger size, widespread in Australia and progenitor of the current mandarin diamonds which are bred as cage birds;
The scientific name of the species derives from the Latin gutta ("drop"), in reference to the characteristic black stripe under the eyes that reminds a tear that lines the face. 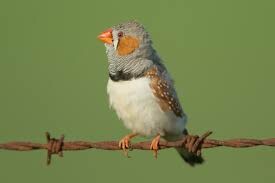 Mandarin diamond(Timor Zebra Finch) is naturally widespread in large coastal areas of eastern and southern Australia, as well as on various Sunda islands such as Flores, Timor, Alor, Wetar and Sumba. This bird has also been introduced in much of Indonesia and in Tasmania, where it was naturalized: thanks to its resistance and adaptability, moreover, populations of individuals who escaped captivity are also scattered in the northern hemisphere.

The original habitat of the mandarin diamond is represented by areas of savannah and dry subtropical areas with grass cover and with sporadic presence of bushes or trees. However, it is a very rustic and adaptable species that tolerates a wide range of temperatures and can live in environments ranging from semi-desert to temperate, passing through areas with strong anthropic disturbance where it adapts very well to coexistence with man: its presence is however linked to the concomitant presence of permanent sources of fresh water but in the absence of fresh water it has adapted to drinking sea water. 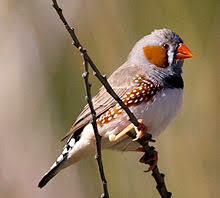 These are small birds, which measure between 8 and 12 cm in length for a weight that can reach 12 grams: for the same age, the two sexes have similar dimensions. Domestic specimens, even in the "ancestral" varieties (ie with unchanged shape and color compared to wild specimens), tend to be heavier due to more constant nutrition, reaching 40 g in weight. 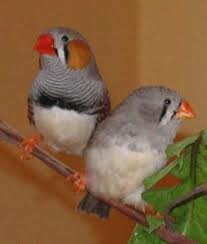 The body is rather robust and rounded, with a square-edged tail and a squat and robust beak.

This species has a marked sexual dimorphism as regards the coloring of the plumage: both sexes are mouse gray on the back, with a tendency to lighten in the ventral area, until they become white on the belly and undertail, while on the wings the gray tends to fade to brownish. The tail is black with white bands, and under the eyes there is a characteristic black "tear" that reaches the chin and delimits two dirty white mustaches on the sides of the beak. The male mandarin diamond also has a characteristic orange spot on each cheek (also delimited by the "tear"), a zebra pattern on the throat and chest, where this design culminates in a horizontal black band, in addition to a bib anch it is black on the chin and a brick red band dotted with white on the sides. The beak is orange-pink in the female, while in the male it is coral red in color: the legs are orange in both sexes.

Numerous color variants of this bird (about 50 accredited) have also been selected in captivity, including "white", "piebald", "black cheek", "black breast" etc., whose particularities are easily understood by the name. 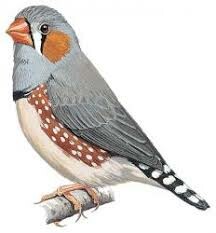 These are diurnal birds with gregarious habits, which tend to move in small flocks of at least a dozen specimens of both sexes, which keep in contact with each other by means of calls emitted very frequently and which consist of short chirps. whose complexity is greater in males, where there is an individual diversity of singing with similarities directly proportional to the tightness of the relationship between the specimens: in fact, each male tends to trace his song on that of his father, making some small variations that may come from listening to songs of other males or from sounds of the surrounding environment. Recent studies have shown that performing solo solos to females is a rewarding experience for males. The females, however, are not able to formulate articulated songs because during the embryonic development there is no production of estrogens in testosterone-like hormones, which preside over the development of the brain area responsible for the evolution of the singing ability.

The calls also have the function of identifying each bird within the group, with the members of the same that tend to drive away strangers, especially during the reproductive period.

These birds tend to be sedentary, but do not hesitate to make displacements even of considerable size in the event of a shortage of food or water. 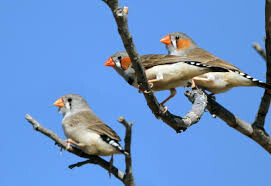 These are mainly granivorous birds, which feed mainly on mature millet; however, thanks to the large beak the mandarin diamonds are able to be right even of very hard seeds, provided they are small in size. Other highly appreciated foods are fruits, vegetables and berries, while it is quite rare that these birds also feed on small insects and larvae: this occurs especially during the reproductive period and during the moult, i.e. when a greater quantity of nutrients is required to make in front of the deposition and the care of the nestlings or the regrowth of the plumage.

In captivity, they willingly accept a common mixture of seeds for exotic, supplemented occasionally with pieces of fruit and vegetables and egg mash. They also frequently eat cuttlefish bones or the like, especially female specimens, as it helps the intake of nutrients to make eggs.

These are very voracious birds, which tend to feed quickly by dropping a lot of food on the ground: this behavior in nature is very useful for seed dispersal. 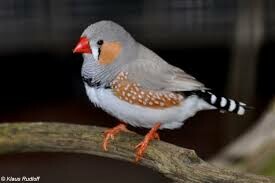 The reproductive event generally takes place in conjunction with the rains and does not follow a precise seasonality, so that the mandarin diamonds are able to reproduce as soon as the weather conditions are favorable. The courtship consists of a series of vocal calls also elaborated by the male, who at the same time performs a sort of dance made of hops around the female: once formed, the couples stay together for life, although they are not rare cases of infidelity on the part of both partners.

Nest with chickens of about a week.
Both sexes collaborate in the construction of the nest, which begins about a week before the laying: while the male takes care of the general architecture of the nest, the female provides for its padding. The nest has a characteristic spherical shape, measuring about 15 cm in diameter and is made up of various layers of finely woven filamentary material (mainly grass stems and small roots of less than 5 cm in length, but also fluff, feathers, leaves and in captive jute frays). The nest is generally located in a secluded and elevated place, such as the cavity of a tree, the thicket of a bush, an abandoned den, or even a cavity in the wall of a building: inside it the female lays from 2 to 7 (in most cases 5) eggs of about 15 mm in length, generally laying one a day, beginning to hatch actively only after the laying of the second or third. During the hatching (which lasts about two weeks) the male tends to monitor the surroundings by perching on the top of the nest and signaling the possible presence of dangers or chasing away any rivals (whether they are his own children, belonging to a previous brood) ): both sexes however sleep together in the nest at night. 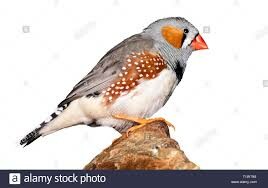 The chicks at birth are completely implumed and differ from one day of age from each other, so that in particularly numerous broods it is not uncommon for the larger nestlings to deviate even a week from the last hatching, which often it leads to starvation of the latter, unable to compete adequately for food. As also in the other estrildidae, the nestlings have a particular design and papillae in relief on the palate, these characteristics being specific species which allow the parents to recognize them as conspecific and to stimulate the beak by seeing the beak open. The diamonds are diligent parents and frequently feed their own chicks, with both parents taking turns in this operation.

Two juveniles: note the still black beak.
The first feathers around the week of life begin to appear at the nestlings, while between two and three weeks after hatching they generally begin to venture out of the nest and, a few days later, to fly away. However, they continue to spend the night in the nest with their parents for another two weeks after fledging, when they voluntarily leave or are aggressively chased away by the parents about to carry on a new brood.

The young specimens are usually of a very similar color to that of the females, except for the beak, which, in most cases, is black until the month of life, when it assumes the typical color of the animal's sex. : the male's cheeks begin to color around two months after hatching.

Sexual maturity is reached after three months, with females tending to mate later on the same age.

The life expectancy of the mandarin diamond in nature is around 2-3 years, while in captivity these animals are more long-lived and live up to 11 years. 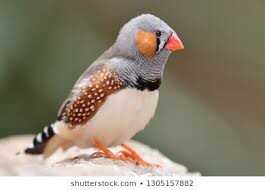 The mandarin diamond(Timor Zebra Finch), by virtue of its rusticity and resistance, combined with the beautiful color and liveliness, has been bred and reproduced in captivity for centuries. Precisely by virtue of the ease of reproduction, the monogamy that makes it possible to breed numerous specimens in a single environment and at the speed of the life cycle, this bird is also used as a model organism in scientific research, in particular as regards the system auditory and the mechanism of data collection and storage in the brain. 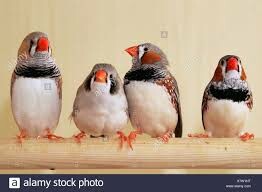 In areas where it is naturally widespread, the mandarin diamond is very common and well represented, so much so that it is considered as "minimal risk" by the IUCN. However, the populations of this bird suffer from pollution, habitat destruction and predatory pressure from other animals (especially mice and rats that prey on nests, but also dasiuri).

While not threatened, the mandarin diamond (as well as all native species) in its wild form has been protected in Australia since 1960 and its export is strictly prohibited, unless specific exceptions are granted by the government.