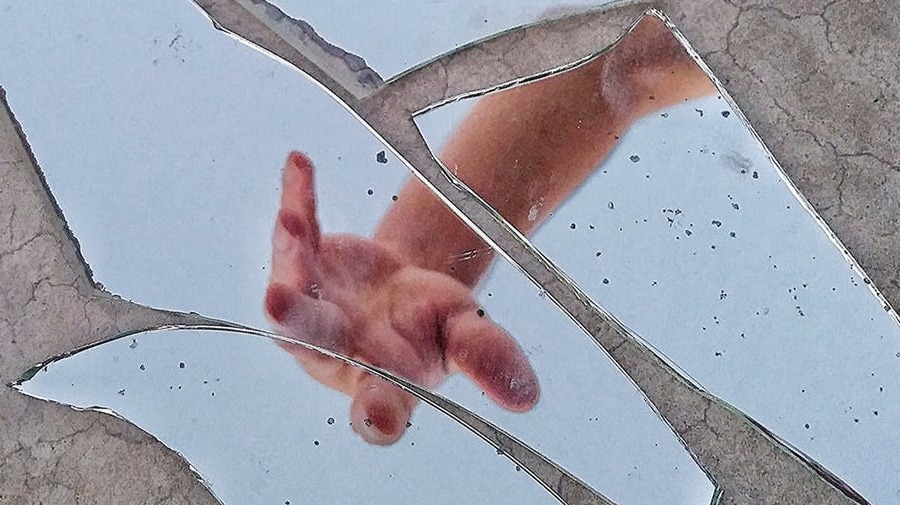 She stood in the middle of a plethora of mirrors, each one showing her reflection. But the people she saw were not exact copies. Each one felt the need to voice their displeasure in some way.

"You should really be exercising more," one said with an air of disdain. "You're putting on weight."

"You had so many great goals for your life," another expressed with some disappointment. "What happened?"

"Were you planning on going back to school, or are you satisfied with your current menial job?" a third doppelganger taunted.

She sat on her bed and tried to redirect her thoughts, but they came at her rapidly, all of them negative: constant reminders of her failings and shortcomings. She picked up the book she'd been reading, hoping she could distract herself and get lost in its pages. However, the mental cloud kept her from focusing on the words in the story. She found herself reading the same sentence over and over again, while she similarly ran in circles mentally.

"Why don't you get up and get something done?"

"Other people function normally. Why can't you?"

The reflections chastised and insulted her, their voices rising as they spoke over one another. She put down the book, put her head in her hands, and tried to calm her mind. She considered curling up on her bed and taking a nap, but as she sat and tried to calm the mental commotion, she felt a hand on her shoulder.

Her sister smiled softly before sitting next to her. "Everything ok?"

"Just feel like a bit of a failure at times. I thought I'd be further along at this point, you know? I'm almost 30. Never finished college. No steady relationship. No fancy job. Wondering what's wrong with me."

"Hey, be nice. That's my sister you're talking about!" Her sister gave her a friendly shove. "Seriously, though, you're too hard on yourself. You'd be pissed if you heard someone call me or one of your friends a failure. You shouldn't talk about yourself like that."

The voices had quieted. Having another person in the room had caused the reflections to hold their tongues temporarily.

She nodded and considered her sister's words. "You're right. It's just hard to keep that in mind when I'm feeling down."

Her sister rose from the bed. "Come on, then. Off to the coffee shop. We'll both feel better with a latte." Her sister pointed at the cracked vanity mirror on the desk. "We should really replace that. Doesn't do you much good all shattered like that."

"I actually think I should just get rid of it," she said. "Seems like it didn't do much good even before it was broken. Spent too much time looking for the flaws."

The two walked out of the room. As she grabbed the car keys, one of the reflections in her mind sneered and took a final jab at her. "Running away from your problems for some coffee? You'll never fix anything that way."

"My sister's right," she told herself. "That's not nice. I deserve better," as she turned the mental mirror around.

She walked out the door of her apartment, feeling a little better. She knew the reflections would still be there when she got back, ready to belittle her some more.

The battle for her ego would rage on, but maybe she could take her sister's advice and be kinder to herself. She could try to recognize that she wouldn't tolerate that treatment for people she cared about and should not tolerate treating herself that way.

But maybe it was a start.

Jack-of-all-trades, Master-of-none with some background and education in science and medicine.

Letting out a little bit of everything with the chance of finding Hope at the end.