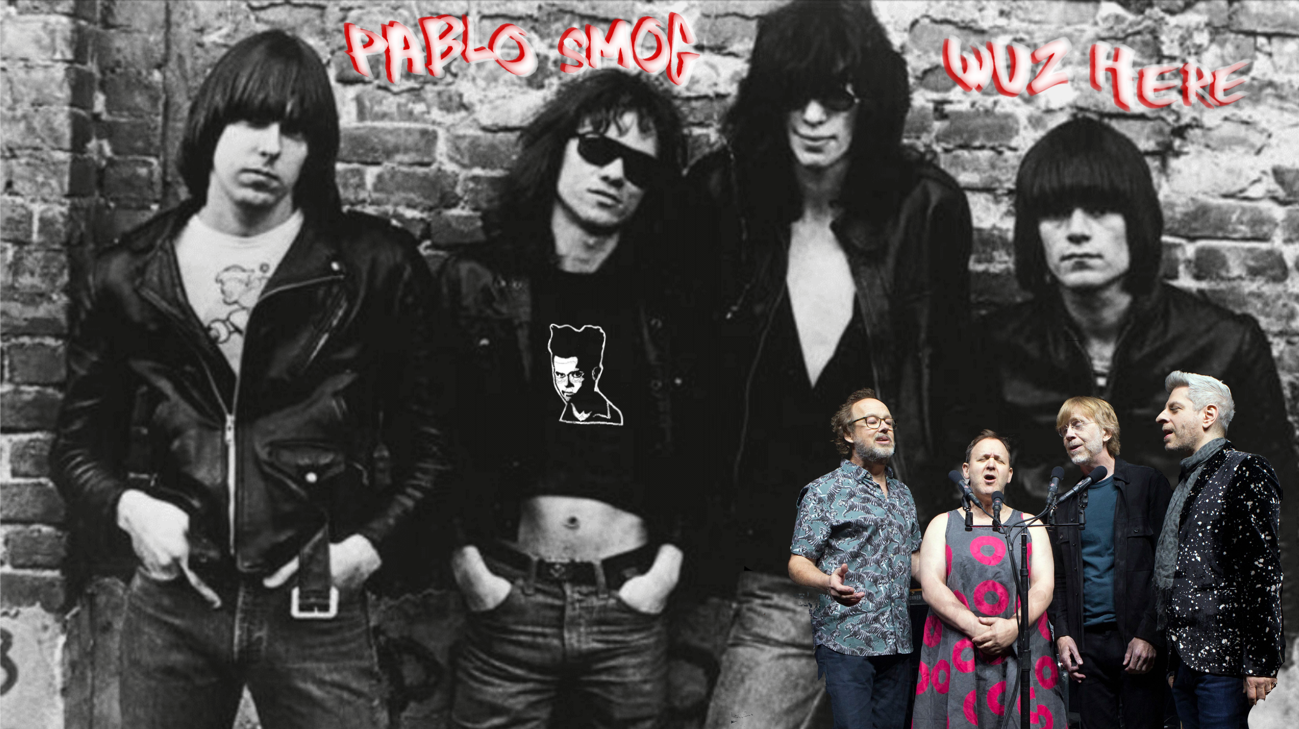 The Organic Tease (is punk mean?)

"I always said punk was an attitude.  It was never about having a Mohican haircut or wearing a ripped T-shirt.  It was all about destruction, and the creative potential within that."  Malcolm McLaren

While checking my last article for typos, I was horrified to discover that I had made insulting comments to close, personal friends of mine.  Not only to compensate for the bad feelings I've been given by people in the same social subgenre in which my friends at least tangentially exist, but to return those bad feelings.  Yeah, sure.  That'll work.  I feel better, now that I've fallen into the trap SATAN has placed for all of us.

How remedial of me.

The insulting comments I made were toward the "earth-toned, tree-hugging" contingent, and their propensity for improving the world via meditation and organic teas.

"A fool hath no delight in understanding, but that his heart may discover itself."  Proverbs 18:2

I'm not taking the comment out of the article, y'understand (the humorous jab about their aesthetic isn't the bad part), but I did include a word of explanation, after the fact.  I told them, I don't care how you dress or what you drink; I went to see Phish twice in the 90s myself, and still think they're all virtuosos on their instruments.  I never followed them, any more than I've ever followed anybody, but I did learn the song "Rift," and still play the middle part of "The Divided Sky," when the fancy strikes me.

Some of my hardcore rocker friends in Chicago used to mock me for liking Phish, and I had a vocal coach who told me they didn't know how to write "songs."  I didn't bother.  I knew I'd be wasting my time.  Don't feel bad if you can't get all the way through it (I can't get through it anymore myself), but I think this is a beautiful piece of music:

It isn't your aesthetic or diet or interests that concern me.  Nobody with any sense of true independence cares what you wear, or listen to, or drink.  Punk rockers are, in fact, among the worst offenders when it comes to aesthetic compliance.  They're all about their look, their miserable, angry little community, their terrible musicians.  They can be very judgmental.  It's one reason I'm not punk and can appreciate the Phish crowd for what they are; aesthetic differences aside, the Phish types tend to be seekers, or at least have open minds and are interested in things beyond their immediate sphere of psychedelic drugs, people who take psychedelic drugs, and 20-minute songs about psychedelic drugs.  They are trapped in their own little world of continual mental expansion, not unlike how the punks are trapped in their own little world of ever-decreasing acceptable norms.  It will end in an astral explosion of infinite suffering and neverending endless depth, but at least they don't judge you on how encyclopedic is your knowledge of New York Dolls lyrics.  A word to the wise in 2022, from a band of probably-straight guys dressed like women:

"Personality crisis, you got it while it was hot
It's always hot, you know it's frustration and heartache is all you got"

"When you see yourself
Does it make you scream?"

A friend once gave me that NY Dolls album, and I liked a song from it and posted it on my Myspace, and he commented with a smug wink, "poser."

Poser?  I'm not pretending to know everything, or even anything about these guys, I just thought it was a good song.  I thought I'd share my enthusiasm for it.

But that's not what it was about for him.

So what was it about?  If not the music, what?  Why did he feel the need to judge me like a schoolteacher, deciding whether or not I was knowledgeable enough to enter the sacrosanct inner chambers of his accredited, Ivy League Master's program, like I was applying for the opportunity to pursue a post-graduate degree in Modern Douchery?  Why didn't he just give me the album for giving me the album's sake?  Why did I make those unfriendly comments about tree-huggers in my last article?  Why?

Not necessarily, but yeah.  Kinda it is.  Or rather, it has become mean.  I wouldn't say that X-Ray Spex was a mean band.  I wouldn't say that the Ramones were a mean band.  Apparently, their friends think it's necessary to scrunch up their faces in order to communicate their ridiculousness, I mean edginess, to the camera, but the Ramones themselves seem pretty calm and self-possessed.  Which is saying a lot, for a band that had the internal melodrama of a psych ward: 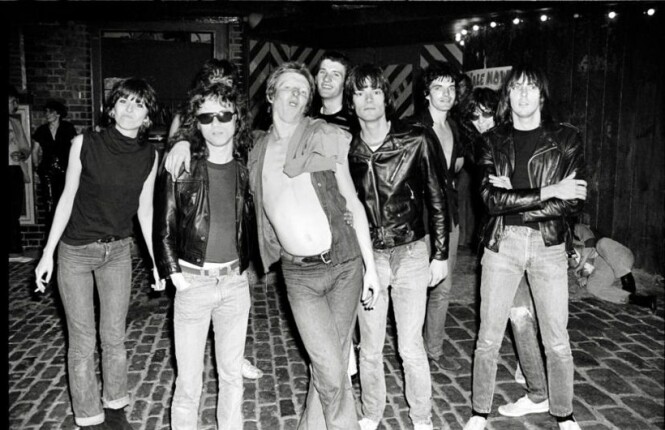 But punk has become mean, hasn't it?  I mean, if it's "all about destruction," as Malcolm McLaren states, then it has no choice.  At some point, the destruction will turn in on itself and become mean.

Punk is known to bill itself as the music of the misfits, the music of the outcasts, the unwanted, and even the creeps.  But is it the rotten, torn-up, rejected furious mean-ness of the thing that attracts the downtrodden and abused, or is it the scene itself that instills the capacity for greater mean-ness in the people who like it, which creates (or at least perpetuates) the potential for abuse?

Dunno.  Both, probably.  Let's look at a few examples from my personal stash, for greater insight.

I have no talent in the visual arts, at all, but I like to make collages from torn-up magazines in my free time.  It's a hobby.  I like to plaster my journal books with magazine cut-outs and stickers I peel from the walls of rancid bathrooms at shows, while I'm waking up to room-temperature instant coffee in a van in the woods, or the parking lot of the show, where I usually spent the night after the shows at the Double Down in Vegas.  That's a rough place to wake up.  The show is later than most (since the bar is open 24 hours a day), and the sun comes up and burns into your skull like the fires of hell only a few hours after you pass out.  You look out the window and it's a brown sun-baked dumpster and a dirty parking lot covered in chewing gum and vomit and dust, and you stumble out of the van and walk through the glaring rays of hell, into the bar to wash your face and hit the road.  It's a rough morning, but it's still one of my favorite shows.

So, what to make of this collage, made from 2 different advertisements, one for a Black Flag show, and one for a show of the surviving members of The Grateful Dead?  Night and day?  I think so. 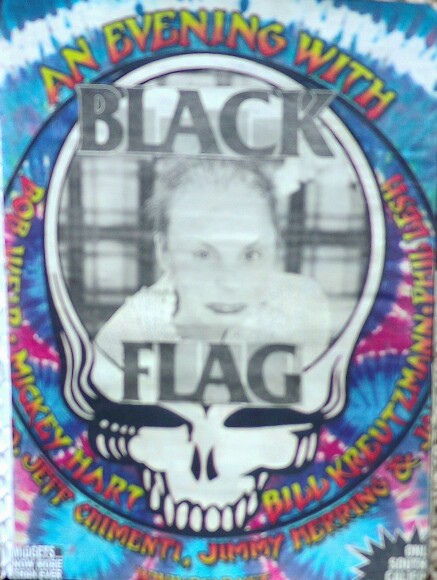 So, you've got the grimacing, black-and-white chemotherapy patient scowling into the camera from the punk side, and some colorful mind expansion on the other side.  Is punk mean? 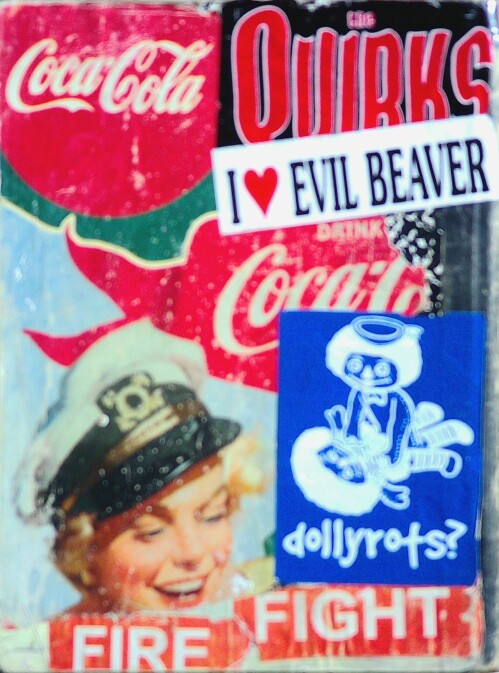 In this hi-res example, you have a sticker for the band Dollyrots, which depicts one doll choking out another doll, in addition to a sticker that declares the sticker bearer's love for the band "Evil Beaver."

I've never heard them, but I'm going to guess that Evil Beaver is not a jam band.  Just a guess.

What about this, which depicts Brody Dalle of The Distillers next to a bunch of money and a sign which reads "Born To Sin?"  I'm not a fan, but she doesn't look like the type who would deny her sin nature.  Which is what the new-age mantra people do.  They deny their sin nature.  They think they're going to "make the world a better place."  But not the punk rockers.  The punk rockers aren't deluded like that.  Punks are all about sin and being bad: 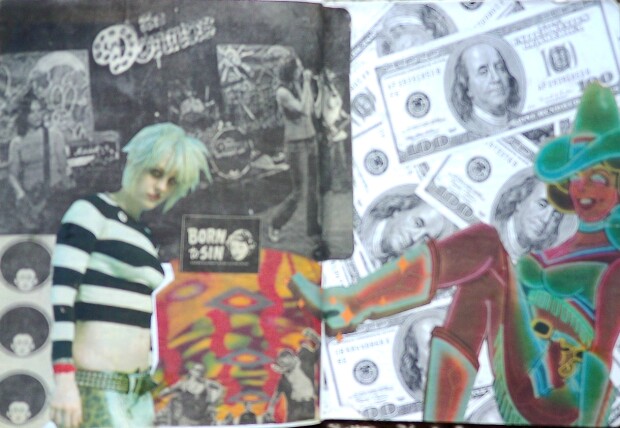 The new-age goody-good people are really what bothers me about the hippie scene.  Not the music, not the drugs.  It's the attitude I don't like.  Their antifreeze smiles bother me as much as the hateful scowling of the lyric archivists and angry band-member genealogists in the punk world.  It's why I'm neither punk nor hippie.  I appreciate aspects of both, but could never, would never, align myself whole-heartedly with any of it.  Be yourself.  Because really, does this obscene cartoon pirate really do it for you? 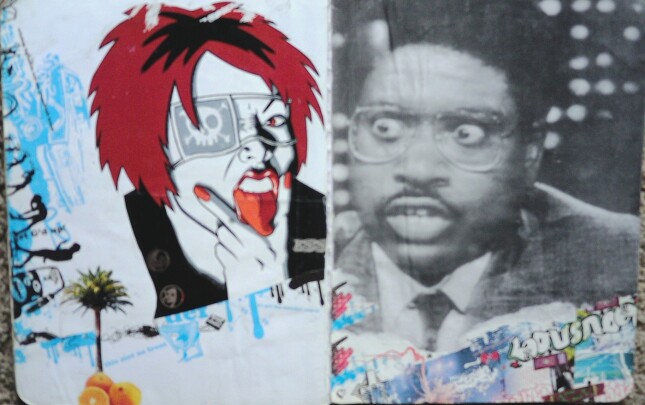 Decide for yourself, but for me she does not.  Personally, I'd rather be free.  Which some people define as "fast, violent, and colorful." 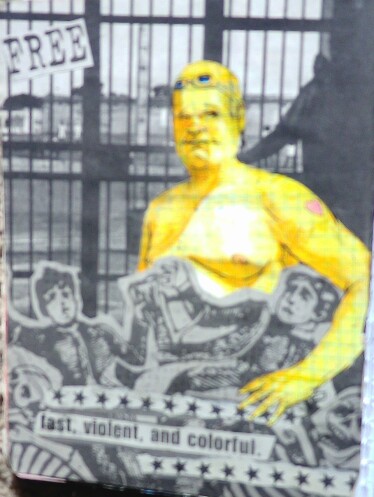 But really, isn't all this punk and hippie talk a bunch of prefabricated nonsense?  Didn't punk start out with some guys who couldn't play, playing the only instruments available to them at the moment?  Wasn't punk the ultimate handmade folk art?  Made by "folks" who happened to sniff glue and like The Stooges?

It was.  Is there anything inherently mean about that?

So, when did punk become mean?

Who cares.  For real punks, it probably never did.  Mean people just co-opted the sound to validate their own anger and rage.  That doesn't mean the sound is inherently angry.

Maybe it is, maybe it isn't.  Given the choice between madness or sanity, between the organic tease of the new-age hippie scene and the misanthropic fury of the punks,

I choose neither.  None, and both, and all of the above.  There has to be another choice.  There always is. 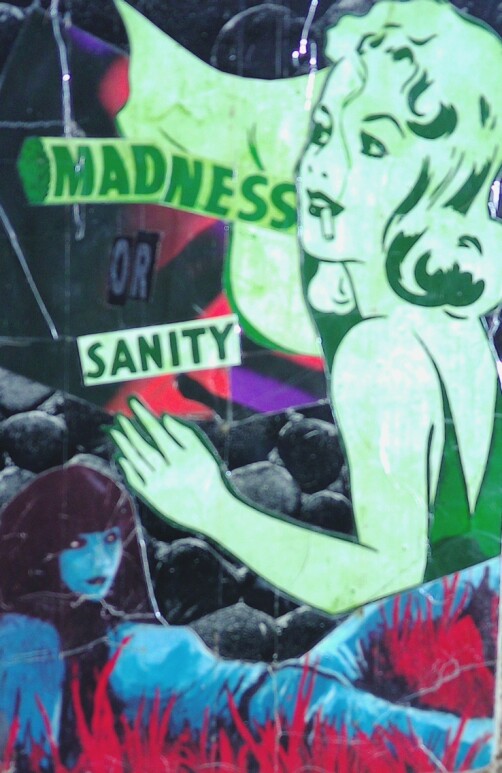