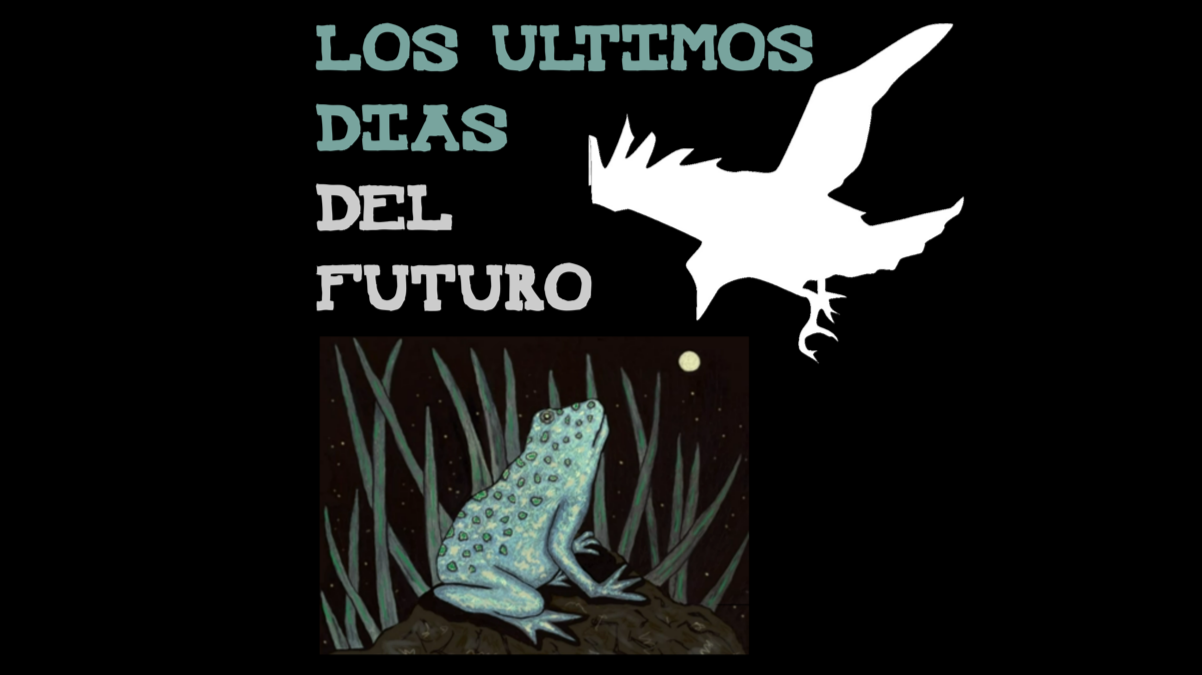 The Last Days of "El Futuro"

I can't listen to The Handsome Family anymore.  I was a big Handsome Family fan from the late 90's through about 2009.  We shared a back page in the Illinois Entertainer, in which my band had received a 25-word write-up; they had an ad for a show or a new album or whatever it was, and their picture was hanging on my fridge for months, since it was on the same page as my write-up.  The photograph bored into my soul.  It featured them sitting with a perfectly-upright 19th-century posture holding a guitar and an auto-harp (probably), and it was strange and ghostly, so I decided to check them out at The Metro in Chicago.  They opened for Andrew Bird, who was still playing in a 1920's speakeasy style with his backing band The Bowl of Fire.  It was one of the best shows I've ever seen.

Their songs about broken, damaged people resonated with me, and after awhile they knew about me.  I'd spent years drinking either alone or with feminine accompaniment listening to "Drunk By Noon," "My Ghost," and "Weightless Again," and by the mid-2000's had turned many people on to them.  We were never friends and they never invited me to any private gatherings, but I'd chat with Rennie at the merch table at their shows; she signed a copy of her new book of short stories titled Evil, which I bought at a show at Spaceland in L.A.  I lost that book during my junkie phase, which bummed me out for awhile.

I can say without exaggeration that they saved my life.  In the fall of 2004, I was having a very bad time on a horse ranch in Maryland, near Washington D.C., and was failing to convince the owners to let me watch their horses for a week.  My heart was somewhere else, and it was on fire.  My soul was in hell.  I couldn't hide it.  I was staying in the basement of the main house, hiding from the world, and one night I remember walking out into the horse pasture in the middle of the night and jumping up and down and screaming silently under the moon because I didn't want to die, even though I did.  I can't explain it, but it was horrible.  I wrote the Handsome Family a desperate, heartfelt email, and they responded.  They actually responded.  I don't remember what they said, but it saved my life.

Their music had probably "saved my life" a thousand times by then, but in actual, practical terms, they actually saved my life that time.

The last time I saw them was at SXSW in Austin in 2009.  I'd just finished my double album Slow-Burning Fun, and had a copy for them which I'd burned to 2 CDR's.  The CD's were inserted into paper slips made from folded typing paper.  The song titles were written by hand on the front.  They were among the first copies of the album ever produced.  I went to the venue, which was a parking lot on South Congress, and approached the stage.  Brett recognized me and said my name out loud, not unfriendly, but not quite welcoming.  I wasn't put-off, since we weren't friends, and I gave him the CD's.  He didn't seem interested.  I talked to Rennie at the merch table either before or after their performance, as usual, enjoyed the show, and left.

Some time later, not long, I read an article in which Brett was rambling enthusiastically about some double album one of his friends had made.  He was really blown away by the fact that somebody had made a double album in this day and age (2009-2010).  He said, "people never make double albums anymore," or something to that effect.  I was instantly crushed, heartbroken, and infuriated.  I wasn't sober at the time, and sent them a scathing email, which was probably ridiculous.  The kind of thing a character in an old-school Handsome Family song would write.  Something ridiculous and disturbing.  Something evil and malicious, but which would never hurt anything but itself.

I haven't listened to them since.

I have only recently begun to listen to select tracks from The Last Days of Wonder again.  "Your Great Journey" and "Tesla's Hotel Room" are two of my favorite songs of all time.  Which isn't such a grand statement, thinking about it.  They have written many of my all-time favorite songs.

I have everything they recorded from Odessa through Honey Moon, pretty much.  Purchased on CD from actual record stores, with jewel-case inserts stained with the beer and wine of a million crazy parties.  Many of them poorly attended, hahaha.  There are always rare tracks you will miss, but do I have the Smothered & Covered collection, and was really into them for awhile.

Like anything you absorb, it will come out in your work eventually.  For me, it was intentional, three times.  The influence has probably always been there, especially lyrically, but there are 3 times I was consciously aware I was trying to write a Handsome Family song.  Well, two.  "Sea of Tranquility" felt like a Handsome Family song while I was writing it.  The extended F chord in the chorus of "True Love is a Trip" is a Handsome Family device, borrowed from "So Much Wine."  "True Love is a Trip" is definitely a Handsome Family cover song I wrote, as is "White Knuckles in the Spirit World."  The other time was more of a musical tip-of-the hat.  There's a IV chord at the end of "Cold Dead Night" on which I say the F word, which was an intentional homage to the beautiful IV-chord F word turnaround in "My Ghost."

The tip-of-the-hat is more than simply lyrical or musical.  The end of "My Ghost" talks about being strapped to "this F'ing twin bed," and it was a hospital bed I was strapped to while longing to escape the "F'ing paradise" at the end of "Cold Dead Night."  I had been drinking very heavily at Canter's on Fairfax in L.A., and was walking home to my rotten hotel in Hollywood when I met some guy on the street who invited me in and gave me a handful of ground-up psychedelics in capsule form.  I ate them all.  Soon, the man was speaking the language of the bugs, and I freaked out and walked into the street.  I was so high, I didn't know where I was.  I saw a door, and immediately assumed I was home.

While trying to break into this house in West Hollywood (albeit unwillingly), the residents called the police.  Fortunately, I collapsed in the street before the cops arrived.  They revived me while I was peaking on this mountain of ground-up psychedelics.  I thought the emergency personnel were demons from hell, poking and prodding me.  They were all encased in flames, and were poking and pulling at me with life-saving equipment, but I thought they were the guy from Hellraiser, torturing me.  I thought I had died and gone to hell.

I woke up the next day at Cedars-Sinai, strapped to a hospital bed.  I had failed to break into the house, and since I was in severe medical distress when the cops arrived, my situation had morphed from a criminal one into a medical emergency.  Angels at work on my behalf, again.  I pulled some sort of tube out of my arm and huge drops of blood splattered out on the checkerboard floor.  Somebody came to the bedside and stopped me.  A demon was summoned, and appeared, dressed in a white labcoat.  He asked me one simple question:

What planet are we on?

Fortunately, I said, "Earth."  Knowing what I now know about Cedars-Sinai being an entry point for all kinds of secret satanic freakshows, if I'd said anything else I would almost certainly have been committed to a radioactive MK-Ultra superhero program and would possibly have only broken out just last week, if ever.  You'd see me sleeping on the street like Will Smith in Hancock, flying around and saving lives and hating the world.

But I said, "Earth," so I was allowed to get dressed and return to my hotel.  I found the bus and took the endless ride back to Hollywood.  I think my hotel had expired, or was going to expire that night.  Whatever the case, I had no choice but to sleep on the street.  I spent a few nights on the sidewalks and under church awnings in Hollywood before migrating to Venice.  I lived on the beach for awhile, on park benches and in the sand, but it sucked so I made my way to LAX and used the round-trip ticket my Midwestern girlfriend at the time had convinced me to buy (I told her I wouldn't need it, but she advised me to get it anyway.  She was right).   I went back to Chicago.  I had lost my guitar, my crushed cowboy hat, my dead stepfather's ring, and my pride.  But I was alive.

So, are we in the last days of wonder?  Has "El Futuro" arrived, dressed like some drunken Lucha Libre wrestler, swinging scythes of pre-apocalyptic, deadly absurdity in these final days before the actual, literal end of the world?

Indeed, I think "El Futuro" has arrived.  The Last Days of Wonder, aside from being my favorite Handsome Family album, are indeed behind us.

p.s.  I haven't been aware of a Handsome Family release since 2009, but while listening to their music tonight on heavy repeat for the first time in over a decade, I discovered this song from 2016.  Another masterpiece.  Long live the Handsome Family.