The Devil's Substitute For Joy
MyCryptoOutlook2022 BitYard Contest and Giveaway - $1,200 in ETH Prizes! >> JOIN FROM HERE << 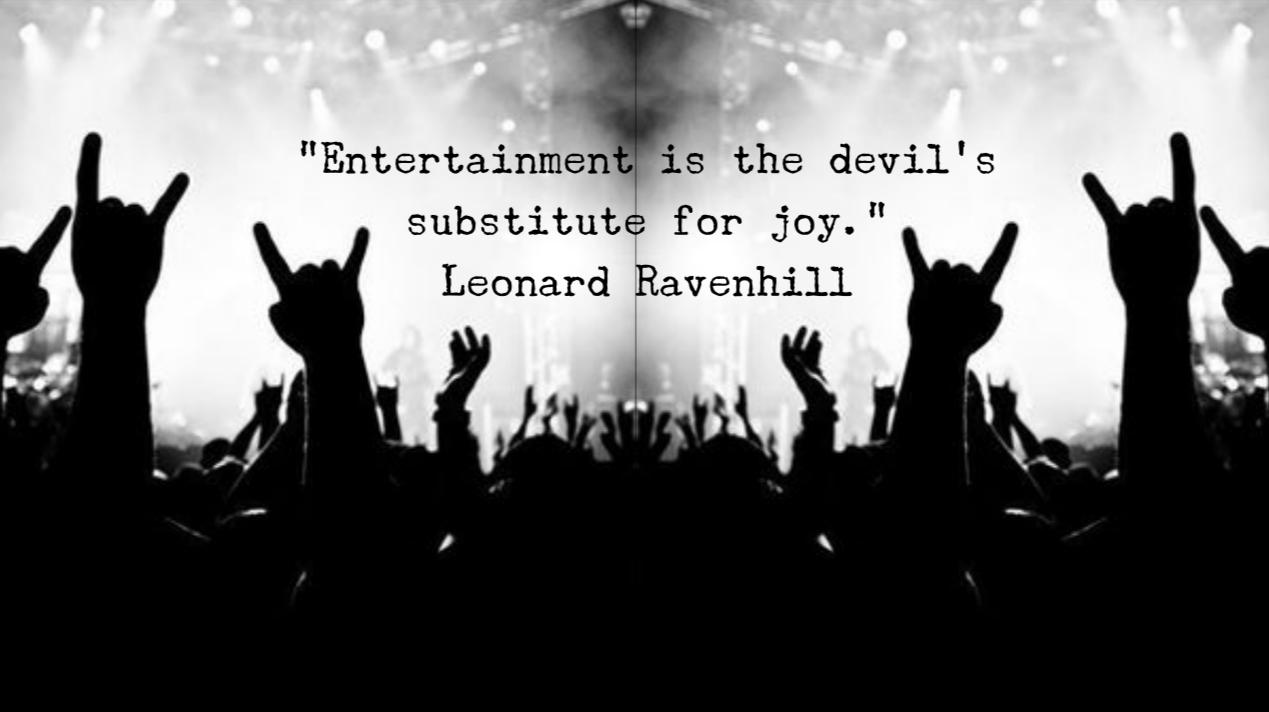 The Devil's Substitute For Joy

I have been subscribed to Joshua Chavez's YouTube channel for awhile now.  I don't follow him closely, but I watch a video every now and then.  He has a lot of wisdom and is worth listening to.  We share a disdain for the words "influencer" and "content," which makes me like him even more.  Here's a video he made about fake Christian music:

I rarely write to people from YouTube I've never met, but after watching the first 30 minutes of a video he put out today about Greg Laurie, I sent Joshua Chavez an email via the contact page on his website.  In the video, he discusses Greg Laurie's friendship with Alice Cooper, and goes on to show how Alice Cooper's supposed conversion to Christianity is completely false.  The video is almost 4 hours long, but the first 30 minutes alone (the part about Alice Cooper) are worth watching:

In my message, I thanked Joshua Chavez for taking the time to show the world how false Alice Cooper's conversion really is.  It's essential information, since believing in the truth of AC's conversion while seeing nothing different about his lifestyle is the kind of thing that will lull any fan (or passive observer) to sleep.  "Alice Cooper is a Christian but engages in mock beheadings with a guillotine emblazoned with a demon head, sings onstage with 'antichrist superstar' Marilyn Manson, and instead of balking at an interviewer's question about 'who does evil best,' he actually answers the question (Rob Zombie), as though the concept of evil is a stage prop, or a costume that can be removed after the show.  That's cool, I guess there's no reason to become a Christian, which is fine, since I didn't want to become one anyway."  Or, just as bad, "I'm a Christian-in-name-only too, and I guess I don't have to repent either."

Exposing such hypocrisy, however unintentional, is important work.

While I was on his website, I came across an article titled "Fame & Popularity Are A Plague To Christianity."  There are a lot of interesting ideas in the article, and it gives me something to think about.

As someone whose entire livelihood is dependent on being as well-known and visible as possible, the title tempts me to, frankly, reject Christianity.  I've come too far with God to do that, though.  He's been too good to me, too patient, too merciful, for me to actually consider abandoning Him now, after everything He's brought me through.  So I clicked on the article immediately.

The main point of the article is to shine a spotlight on the MOTIVE of any given would-be or wannabe preacher, YouTube "prophet," or Christian-themed whateveritis.  Are you starting a YouTube ministry for God, or for attention?

It's a good question, one the culture desperately needs to hear (and ask).

Are you into it for the truth of the thing, or for likes?

“Just because microphones exist, doesn’t mean you should speak into one.”  (THANK YOU JOSHUA)

"Being known is NOT the problem, but rather the desire to be known."

"Paul tells us that godliness with contentment is great gain in the context of material prosperity or abasement. The same holds true regarding the currency of recognition. The one who is not content to be anonymous, will never be content whether he has one hundred million people marching to the beat of his drum."

Speaking of the church:  "When people begin to employ gimmicks designed to entertain, you can be sure their heart is set on the praise of men rather than God."

I could go on, but just read the article for yourself.  He ends with a quote from Leonard Ravenhill.  It's a quote I have to either embrace and solve, at the risk of being forced to abandon my God-given talents (again), or reject with fear, running into the arms of the devil for a false, compromised sense of comfort.

The quote is, "Entertainment is the devil's substitute for joy."

Entertainment is the devil's substitute for joy?

What's that supposed to mean?

It means exactly what it says.  And, if you think about it, it's true.

Art isn't about the audience anyway.  The best shows are the ones where you watch the video and don't remember anything about the show (assuming there's a video).  If the playback is surprising, it's a good show.  This is because you're not self-conscious enough to be thinking about anything but the actual performance, the actual art, during the performance.  The audience isn't fundamental to this process.  They can be encouraging, but they aren't the point.  The performance is the point.  The work itself.

But if the thing is created entirely for the purpose of entertainment, FOR the audience, if the motive behind the "creator" is simply to amuse people, possibly (probably) "in desperate attempts to lure people into their imagined kingdoms," as Joshua Chavez states, then you are dealing with a satanic facsimile of joy.  Instead of joy, you get kicks, thrills, a rush.

You will say, "joy is a kick," and I will tell you it is not.  Not in the dopamine sense.  Not in the sense of getting a rush or being high.  I've heard it said, "joy exists regardless of the circumstances; happiness is a side effect."  Joy is not something you feel because something has happened to you, or is coursing through your bloodstream, or for any other reason.  Joy can exist on an empty stomach.  Joy can exist when everything is conspiring to destroy your day.  According to the Bible, joy can exist in prison.  Happiness however, is needy.  Happiness needs things to be just right.  Happiness is dependent on how much sleep you get, how much you eat, what you eat, where you live, what you do for a living, etc.

Happiness and joy are not the same, any more than art and content are the same.  I've written about this topic for years; scroll through either of my blogs and within 4 seconds you will find half a dozen articles on the topic.  Knock yourself out.

providing for the obvious exception of professional liars,

Our culture today is filled with the devil's substitute for professionalism.

Look around.  Our culture has become a culture of amateurs.  Auto-tuned rappers with nothing to say and no way to say it (but with plenty of studio tricks on hand) pretending to be singers, poets, and musicians.  Postmodern money-launderers posing as artists.  App-based ride services instead of real cab drivers.  TSA agents instead of actual security.

But truth is where it all comes to an end.  Truth doesn't pretend.  By definition.  It can't.

This is why there can only be one truth.  You don't have a truth.  Neither do I.  Truth isn't dependent on our opinion of it; that widely-held canard is a result of decades of unprofessional, unrealistic, joyless falsehood permeating the entirety of Western culture, including art.  And if we don't seek this truth, wherever it may be, we'll never find it.  It won't come looking for us.  But if we do seek after it, we will find it (Matthew 7:7).

Of course, Christ didn't say we couldn't discard what we find.

Are you afraid of the truth?  Or do you have enough self-respect to consider the possibility that you're dishonest, weak, arrogant, and totally mistaken?

Remember:  The only way to ensure that you will be wrong, at some point, about something, about everything, is to never consider the possibility that you're wrong.

I knew a guy in San Francisco who was a talented visual artist, but all of his music was false.  He wasn't a bad songwriter or player, but his songs were all about imaginary situations.  As a result, none of his material had any resonance.  He was an amicable, talented guy, and a good marketer with an interesting aesthetic, and so was able to book many shows nationwide for this reason, but none of his material was true.  His band name and his music were both fake, which indicates his heart was probably fake as well.  His visual art wasn't fake, exactly, but it never told the truth.  He lived in his imagination, and wasted his talent on egocentric lightshows he played for himself on the inside of his skull, planets and stars and crows and skeletons projected against the dome of the planetarium he had constructed for himself inside his own head.  I'm not saying to never use your imagination, but use it to tell the truth.

All he did was tell stories.  Way beyond fiction.  Fiction can tell the truth.  This guy's songs were all stylized stories that were completely untrue.

Once, we had a discussion about the Central Coast area of California, which includes San Luis Obispo.  There is (or was) a bumper sticker in SLO County that said "I dig the SLO life," or something like it.  My disingenuous artist friend said something haughty about it, being from a "more evolved" location like the Bay Area as he very obviously was.  That's what he said.  He expressed his superiority to the slow-motion homunculi that populated the "SLO" area of the Central Coast by saying something about being more "spiritually evolved" than them.  I didn't say anything.

If you've lost the habit of lying to yourself to make your friends happy, you can see how the false belief about spiritual evolution and superiority has played out in San Francisco.  If you've ever spent more than a few days there, you know my friend isn't the only San Franciscan who thinks that way.  And look at it.  It's a city in clear, obvious decline.  My friend's truth turned out to be a lie.

Maybe his writing will improve as a result.

p.s.  This is my comment from the video about fake Christian music posted above.  It was posted over a year ago and has zero comments or likes.  If God wants me to be "content to be anonymous," then He is certainly giving me the opportunity to learn the skill.  And, in fact, He's teaching it to me.

Pablo Con Dios, 1 year ago:  A good time to find real artists who happen to be Christian, as opposed to people who are pushing "Christian art." Not every song will be lifted from scripture, but the fruit will become obvious over time, whether it's good or bad. Like Johnny Cash. I would rather listen to an imperfect artist who seeks after God and whose discography proves it, rather than somebody who is sparkling clean in a shiny, corporate way, and whose music is false and misleading.

I have no idea who most of these people are, because I don't care about fake art, I want real art.