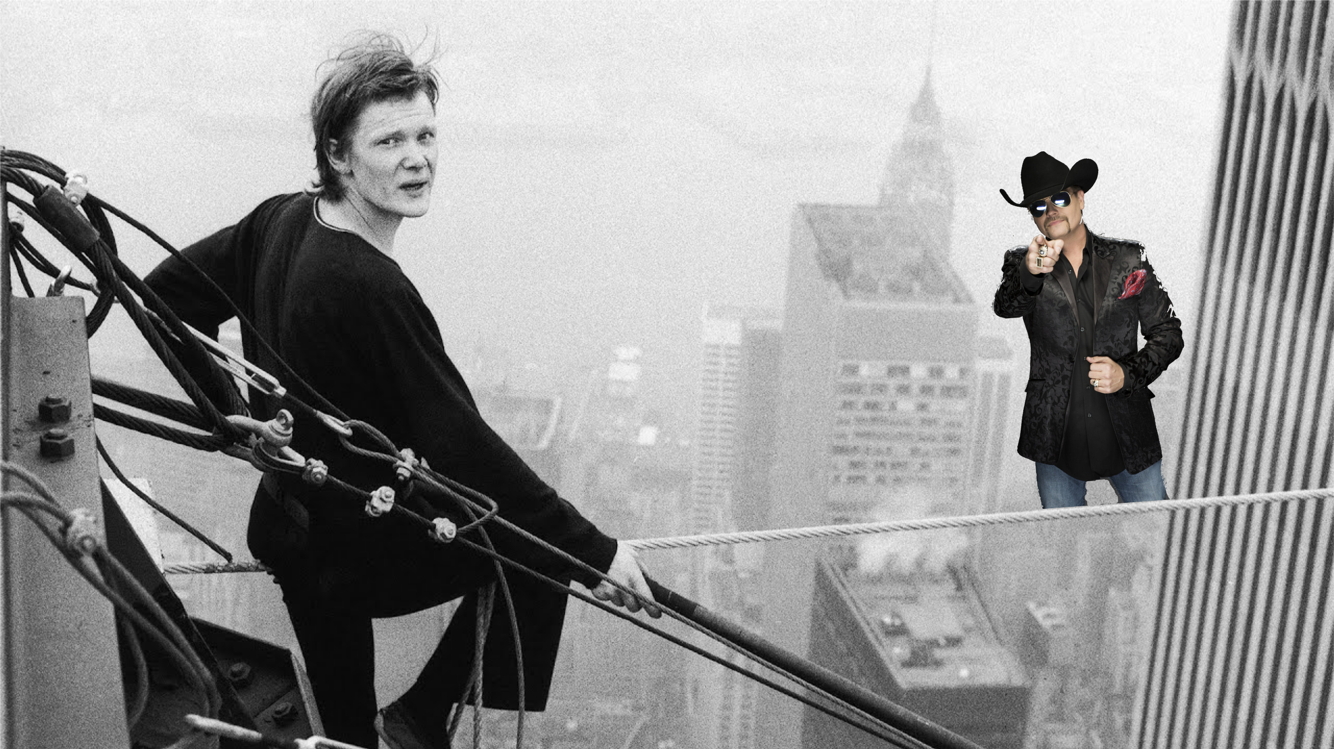 "There's a hole in this country, where its heart used to be."  John Rich

"The song is heroic because the song confronts death."  Nick Cave

There's a scene in Man On Wire, the documentary about the guy who walked a tightrope between the World Trade Centers in New York, in which Philippe Petit hesitates to step out onto the wire, for fear of the American country musician standing in the gap.  The scene is anachronistic and historically inaccurate, so the filmmakers decided to edit it out of the final cut.  Here's a still I found on the cutting room floor.  Observe the doubt, the hesitation, the terror with which Petit contemplates his plan to traverse the country-fried skies above the New York skyline: 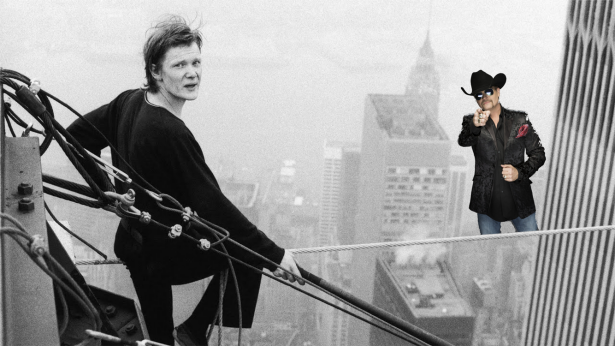 Personally, I think the scene cuts to the heart of the film.  "The film" meaning, not the documentary, but the choppy, handheld amateur pornography that passes for American culture in 2022.  Petit has every reason to be scared.  In all likelihood, the platitudes and gold-plated hee-hawing contained in this song are going to make the artist lose his balance, and he will fall to his doom.  Why should he risk his life to bridge the gap between 2 doomed towers, when songs like "Progress" are standing in his way?

I am aware that, on the surface, the song is about the readily-apparent flaws of so-called "political progressivism."  I agree wholeheartedly with the artless, fabricated sentiment.  But make no mistake, the unintended irony in the title is real.  "Progress" is definitely standing in the way.  Not only of individual freedom, but of artistic truth and beauty.

To prove it, I think we should each ask ourselves, "How do I weep?"

The word "awesome" is too small.  Awe is for movie stunts and mallrats.  "Awesome" is what you call it when a guy grabs onto a rope ladder dangling from a helicopter, just before his car falls over the cliff.  Like at the end of the intro to The Fall Guy:

Still a great song.  Used to love that show when I was a kid.  But never once did it make me want to weep. 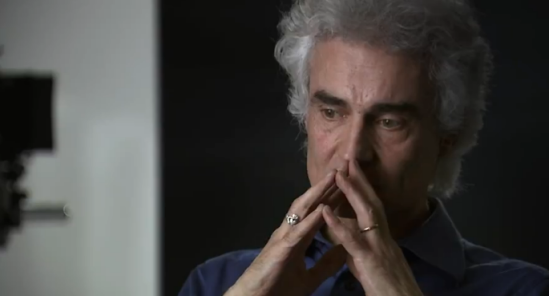 Unlike Philippe Petit's friend and cohort, pictured above right before he loses control of his emotions, remembering his friend walking out onto the tightrope over 30 years prior.  It's not sad crying.  It's transcendent crying.  The emotions of someone who has beheld an act of living, breathing beauty.  His tears are the tears of a man who has caught a glimpse through the cracks in the concrete of mere genius, into a world so beautiful, so visceral and true, that normal art and poetry is struck dumb, and only weeping will suffice.  But it's not sad crying.  His tears are tears of relief.  Not that his friend survived, but the relief of someone who has experienced something they didn't know they needed to experience until they were immersed in it.  They are the tears of someone remembering a gift of unparalleled beauty, a beauty that could never be boxed, wrapped, or strung up on a flagpole.  They are the tears of someone who has witnessed something truly wonderful:  A true artist not only defying, but dancing in the face of death, and laughing about it.  Saluting the defiance of his own demise with an artful, theatrical flourish. 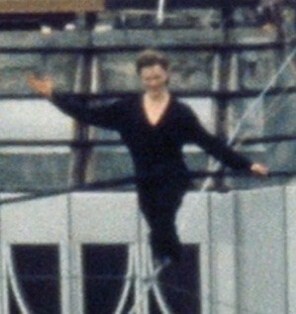 What an image.  What an action.  Words can't describe it.

I want to say it's "heartbreaking," but that would be like trying to fit the moon into a box of chocolates.  I want to say.... anything, but language doesn't suffice.  Language is a teddy bear of pure inadequacy in the face of pure art like this; Shakespeare and Kerouac and Keats are the chief stuffing executives of the whole tired, mechanical operation, jaded factory workers arranging mere beautiful words like flowers in a plastic vase for later sale at Walgreens, compared to what Philippe Petit accomplished when he traversed the bottomless, beautiful pit between the Twin Towers.  Even Ben Whishaw's reading of "Ode to a Nightingale" feels like synthetic cotton in comparison.

Beautiful.  As beautiful as the English language will ever be.  But, still, you could put it on a coffee table and ignore it like the wallpaper at your next social gathering.  You could adorn your ego and self-satisfied sense of cultural refinement with it, if you wanted to.

This, however, approaches what people might call a "religious" experience.  It wouldn't fit on your coffee table.  It doesn't exist to adorn your social life.  Transcendent: 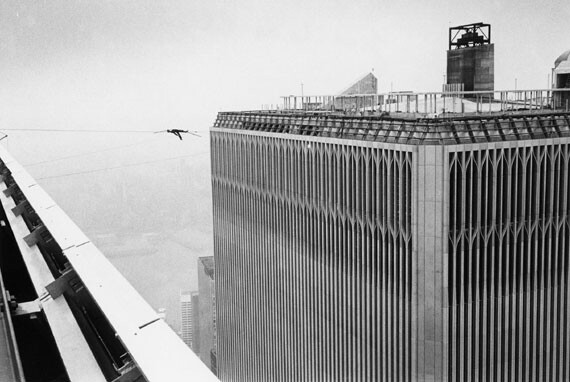 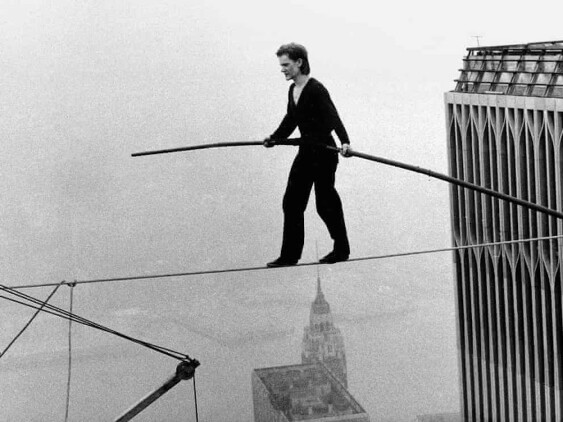 For the purposes of giving this article a title, I'm going to call Philippe Petit's artistic feat the "Requiem Mass in NY."  I'm a dilettante in the world of Classical music, but I love Mozart's Requiem Mass in Dm.  To me, it's as close as music can ever come to confronting what I call the "holy terror."  The Requiem Mass ventured so close to edge, in fact, that Mozart died before he finished it.  He tripped on the tightrope he was constructing between the Twin Towers of his own genius, and went tumbling into the jagged, rocky chasm of eternity.  Mozart played the game, and lost.

Philippe Petit, however, did not lose.  He sang his song, and tempted death, and lived to tell the tale.  It was an act of unparalleled heroic beauty.  And, unlike the crocodile tears of incredulous artistic frustration I experience when I hear the song "Progress" (whatever form that progress may take), The Requiem Mass in NY brings me to tears of joy and transcendent, ecstatic relief.

So, to those who are trying to repel and resist the loss of their country by celebrating a song that is a signal fire of the downfall of their culture, how are you going to stop the progress of fascism, control, and centralized ugliness if you're not producing anything heroic or beautiful?  Name-dropping Jesus in a song that uses clichés to tell your enemies to stow their bad ideas in areas of the body that are typically sunless, I'm sorry, isn't gonna cut it.  There's nothing heroic about the sentiment.  Certainly nothing artful.  And below the surface, just past the shallow part of the pool where it becomes dangerous for toddlers to swim, there isn't even anything true.

A few true lines, maybe, but spoken without courage.  Putting nothing on the line.  Risking nothing in the process.  Why not just listen to "Rain on the Scarecrow," which is actually a good song?  Not the least reason being because it's true:

You have a really cool car, John Rich, you really do.  May God continue to bless you and everyone who is listening to your song on infinite repeat as we speak.  But, how do you weep?  No one ever accused John Cougar Mellencamp of being a genius, but at least he told the truth, and was at least a little embarrassed about his "Beverly Hills lifestyle" after he became successful.  He had real concerns about losing his Indiana roots.

What about you, John Rich?  Does the pursuit of excellence in your work drive you like a madman off the cliffs of transcendent genius?  Or, when you see someone walking the tightrope between heaven and hell, life and death, beauty and truth, do you cut them off like the angry natives in The Man Who Would Be King?

Unwittingly, to be sure.  It doesn't matter.  Whether you're aware of your artistic heroes or not, you should have more sense than to patronize your countrymen by presuming to speak for them, like a Communist iconoclast.  "They shut down our this," "They shut down our that;" nevermind what they did to the collectivist "us."  Say something that takes some guts, and tell me what they did to YOU.

Make us weep.  Don't patronize us with platitudes; use your love of the game to not only silence your detractors, but inspire them to celebrate you.

Make our tears count.  Or get off the stage. 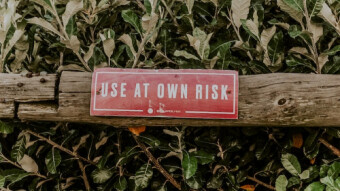