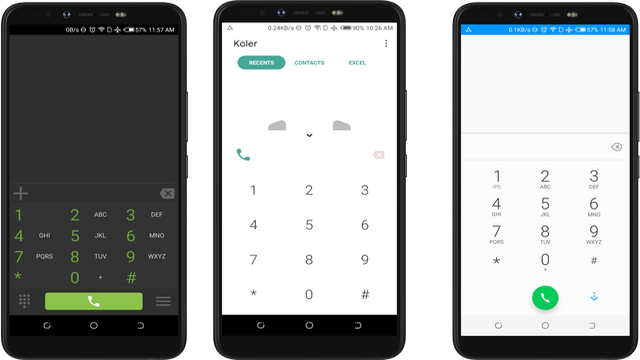 I have been so busy lately that it's almost rounding off to a week since I published my last review. Before then, I published a review for Koler; A uniquely stylized phone app, with customizable features for Android devices". And in that publication, I gave clear points why Koler should be more preferred to the stock phone dialer on Android devices.

Since after my last review, I have been opportune to use several other open-source projects. I will be reviewing a project known as Emerald Dialer. Emerald Dialer is one of those projects I used while I was off from publishing reviews. It's a similar project to Koler, and can also be compared to the stock phone dialer on Android devices.

How I Found And Installed Emernarld Dialer

I usually hunt for projects to review via GitHub. It wasn't a different case this time. After I saw, and read the ReadMe file of this project, I then noticed that the project owner only provided a single link for users to download his project. I successfully downloaded and installed it from the link below. I recommend this same link for anyone reading this post.

As usual, every new project I install that needs to access my storage, or contact would request for the permission. This isn't a different case with Emerald Dialer. But how it displayed the request was a bit different from the rest of the projects I have used. When the request to access my contacts and storage is displayed on other projects, they do display it in the project. But Emerald Dialer displayed this same request outside the app.

The first two screenshots below are the screenshots from Emerald Dialer requesting for the permission to manage my phone calls, and contacts. If you look closely to the two screenshots, you will notice that the request is displayed outside the app, which is strange to me.

How an app requests for permission isn't the main reason why we download them. All we want from them is to function as intended. And for that to be possible, we have to accept the permissions, which I did in the case of Emerald Dialer. After I accepted the request from the first, and second screenshots, it then displayed an interface where it explained why it requested to access my contact and call logs. From the third screenshot, it also requested me to finally click on the accept button which means that I clearly understand the written note.

The projects I have been reviewing lately usually have a clean, and beautiful home screen. This isn't a different case with Emerald Dialer. When the home screen displayed, it looked so attractive. At first, I thought it's clean and attractive because my call log is empty. But the interface still looked attractive even after I placed, and received calls.

At the beginning of this review, I stated that Emerald Dialer can be compared to the stock phone dialer on Android devices, or with Koler (one of the projects I have reviewed in the past). Yes, and that's why I have decided to upload screenshots of the home screens from the three apps. The first screenshot is from Emerald Dialer, the second is from Koler, and the third is my stock phone dialer. After I was shown Emerald Dialer's home screen, the interface didn't look strange to me because it looks similar to the rest of the dialers I have installed on my phone. You can also agree with me after viewing the three screenshots provided above.

From Emerald Dialer's homescreen (the first screenshot above), there's a button I can seamlessly press to display the dial pad. And I love that fact that this button is placed at the bottom of the screen, making it easy for users to locate.

The second and third screenshots are the interfaces from koler and my stock phone dialer. Both interfaces have the buttons on their home screens which displays their dial pads. This simply means that the three apps have the required buttons on their home screens to use the dial pad function.
However, Emerald Dialer and Koler app have other unique features which makes them preferable over my stock Phone Dialer.

On Emerald Dialer, there's a button to display the app's preference, speed dial, clear call log, and open about page. I will talk more about these options later in this article. While on my koler app, there's a unique button to search for contracts.

Emerald Dialer and its competitors were developed to function as an app to place and receive calls. Their other functions are to save contacts, view contacts, and call logs. To accomplish the function of placing calls, the dial pad must be used.

When I started to review these dialers, I forgot to check if any of the apps have an updated version. Because of that, I was comparing the old version of Koler with Emerald Dialer. And In the old version of Koler, the button to display the dial pad was missing on the home screen. But after I updated to the latest version, I am glad to say that the expected button is now available on the home screen.
After using the newly added button, it then displayed the dial pad as shown in the second screenshot below. Being able to save a contact with these dialers would be an additional feature to their main features. And I am glad to say that two among the three dialers installed on my phone has this feature.

The screenshots below are arranged as others in the previous paragraphs. The first screenshot is an interface from Emerald Dialer displaying the four digits numbers I typed, and a plus (+) button for saving contacts. After I clicked on this button, it then opened another interface where I have to provide the name, and email address of the contact. The required information isn't mandatory as I was able to save the digit without providing the whole information it requested.

What I love most about Emerald Dialer's interface is the position the developer placed the plus (+) button. When you look at the first screenshot below, you will notice that it's placed very close to the Entry field. The second screenshot belongs to koler app. The function to save a number is missing. Because of this, I wasn't able to add a new number to my contact list. I had to use either Emerald or my stock phone dialer.

The third screenshot is an interface from my stock dialer. If you look closely to the screenshot, you'd notice that it has two options to save contacts. After I typed a number on this dialer, I was shown two options to either save it as a new contact or add it to an existing contact. The second option isn't available on Emerald dialer

After my experience from trying to save contacts on these dialers, I have chosen Emerald Dialer to be the easiest because of the placement of the plus (+) button. I would have chosen my stock dialer over Emerald dialer. But the position of the save button is at the top of the screen.

Placing And Receiving A Call

The main function of a dialer is to be able to place an receive calls. And when I tried that on Emerald dialer, I notice that it redirected me to my stock dialer interface.

Does this mean Emerald doesn't have an interface to view outgoing calls?

Yes, I guess so. Because, when I placed a call with Koler, it displayed a unique interface for outgoing calls.

The Extra Options On Emerald Dialer

There are two reasons why I prefer apps with the option to change themes;
Firstly, applying dark themes at night automatically extracts blue Rays from the screen. If you are interested in reading more about this topic, you can read my review on RedMoon app.

Secondly, I feel more comfortable using dark interfaces because they are cool. in fact, After I installed Emerald's Dialer, the default theme is white, and not dark as I have been displaying it in previous paragraphs. The images below are the screenshots displaying the default theme of Emerald's app, and how it looked after I applied the dark theme.

After the last version release, the project repository has received four different codes updates. One out of the updates is a new feature, while the rest are translation updates.

The developer Added dialog for log entries and fixed permissions check. Below are the newly added translation changes.

It's good to know that the three Dialers are able to perform the basic functions of a dialer. However, the unique functions that are available on Emerald's dialer, and on Koler's app made my stock Phone Dialer less useful.

I prefer Emerald dialer to Koler app because of the options to change the app theme. Also, Koler's app lacks the option to save digits which is available on Emerald Dialer.

The stated statements above are only my views. The three dialers are good as they perform their basic functions. However, I prefer and recommend Emerald's dialer for anyone looking for the complete dialer to use.

I also published this review on steemit