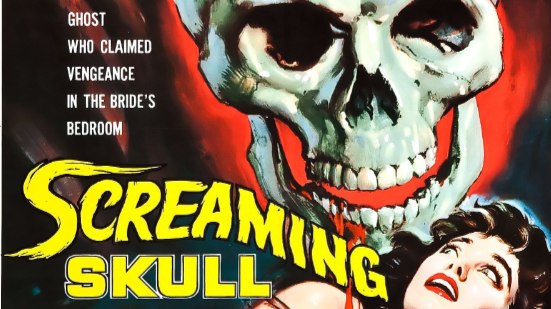 As the film opens, the camera holds on a flame before slowly panning to a coffin. A voiceover informs us:

The Screaming Skull is a motion picture that reaches its climax in shocking horror. It's impact is so terrifying that it may have an unforeseen effect... It may kill you.

The coffin opens—it's empty. The voiceover continues: "Therefore, its producers feel they must assure free burial services to anyone who dies of fright while seeing The Screaming Skull!" A plaque inside the coffin reads, "Reserved For You." This reminds me of Frankenstein, some 27 years earlier, opening with a warning that you might be thrilled, shocked, and horrified. But will The Screaming Skull deliver as the monster did a generation? Let's see! 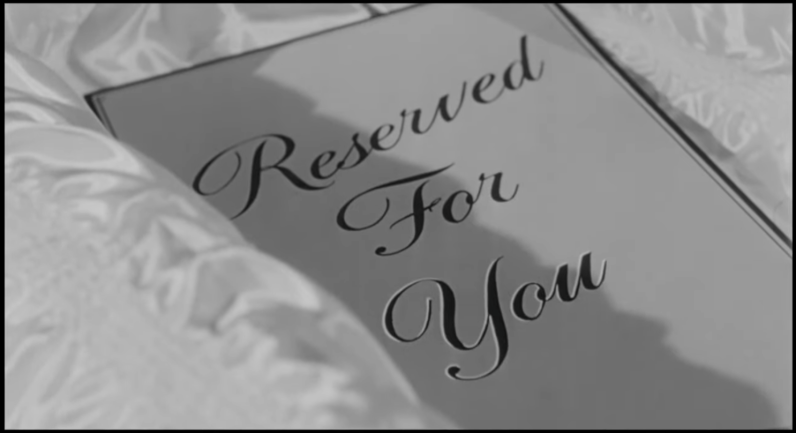 Transition to an idyllic pond behind a house. A skull emerges. There's a screeching sound. Roll opening credits. This is bizarre.

Newlyweds are moving into the pond house. This is Hubby's second marriage. New Wife is glad Hubby has found love twice! Reverend and his wife drop by and stay for dinner. Reverend actually calls New Wife "New Wife."

Developmentally impaired Gardener is introduced. He's a mess, and Reverend lets him know it. Gardener grew up with, and loved, First Wife. He keeps the grounds tidy as a shrine of sorts. He also mutters to a portrait of First Wife and talks about when she died, she was supposed to come back and play with him, but didn't. Uh oh...

Reverend and New Wife have a heart to heart where Reverend tells her that First Wife's skull was smashed. In fact, she probably hit her head on the wall where they're sitting, then rolled into the pond and died. Yikes. We learn that New Wife's got a dark past too. Her parents were drowned and their bodies never found, leading to her spending time in an asylum. Also, she is filthy rich.

As weeks pass, New Wife is hearing knocking and screams, and the portrait of First Wife appears in the house. Also, she finds a skull in a closet, so tosses it out the window. She thinks she's going crazy, again. Hubby says the screams are peacocks and blames the rest on Gardener, banning him from the house. At some point, while Hubby is shopping, New Wife and Gardener visit First Wife's grave, where Gardener tells her that First Wife cries at night.

Later, New Wife is awakened by knocking at the front door. She answers—it's the skull! She screams and falls backwards as the skull rolls after her. Hubby doesn't see the skull, but suggests burning the portrait to ease her mind.

They do. While clearing the ashes, New Wife uncovers the skull again and freaks out. Hubby says there's no skull there! Secretly, he grabs the skull and hides it in the pond. He's been lying the whole time! He's the villain.

As an aside, there is zero chance the producers ever had to pay for the funeral of a viewer. This is not scary.

Hubby tells Reverend he will take New Wife to an asylum, otherwise she'll kill herself. He then sneaks off to find the skull and freak New Wife out again, but it's gone! Thinking Gardener stole it, Hubby slaps him around. Gardener claims that First Wife took it. Hubby, I don't know, believes him, I guess. Gardener secretly takes the skull to Reverend, and confirming his innocence and implicating Hubby in the strange events. 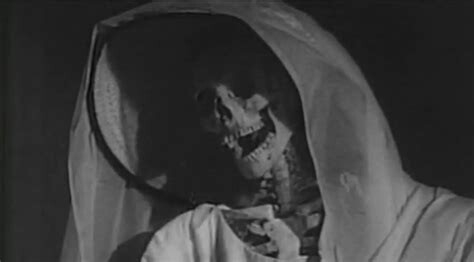 New Wife is planning for the asylum, but wants to bid farewell to Gardener. Instead, she encounters the ghost of First Wife! She screams all the way into the house.

There's a knocking at the door.

A full skeleton of First Wife, dressed in a gown and hat is standing there! Ahhh!!!

She slowly floats toward him. He screams and breaks her with a stool, but her skull pushes on.

He runs outside. A screaming ghost skull follows. Everywhere he turns, the skull is there.

The skull catches him and bites his neck. He wrestles it into the pond, just as a rainstorm hits. Reverend and wife show up, help New Wife, and find Hubby floating, dead. Reverend says Hubby did it all for New Wife's money, and questions whether First Wife really died by accident. Gardener says to the pond, "They're gone. Rest."

This is not good. But it's available on YouTube, so see for yourself!