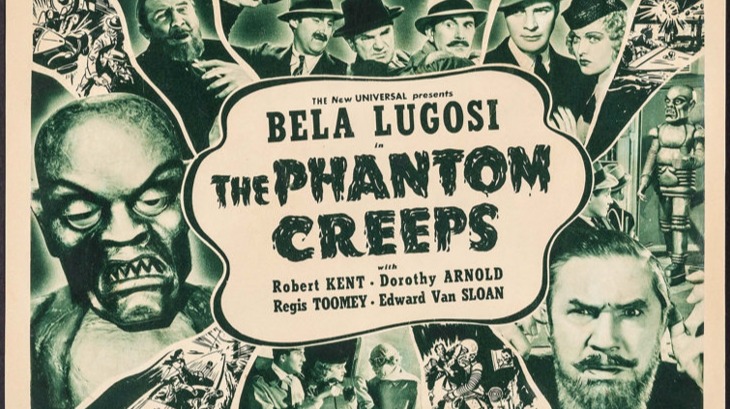 Often, with old movies, the pacing is so slow that the story can be hard to get into. 1939's The Phantom Creeps suffers from the exact opposite problem--the action and story are in your face from go, and so much happens in the 73 minutes that the film can be hard to follow. This is likely because it was originally a 12 part serial spanning 4 hours. Serials were common in the early days of motion pictures, and would be shown in regular, periodic segments at theaters.

The brilliant Bela Lugosi stars as a mad scientist who has been busy. He's created a gigantic robot slave (with a giant demonic head), an invisibility belt, and mechanical, exploding, coma-inducing spiders powered by an element he mined from a meteorite (from which he has other coma-inducing weapons). I think. To be honest, this movie is kind of a mess. The mad scientist's wife is killed and he decides to use his creations to conquer the world. 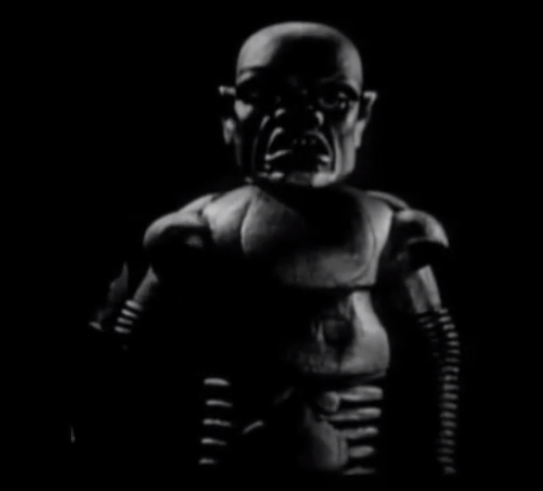 Various governments want the mad scientist's inventions, and throughout the film, he is pursued by foreign spies, a reporter, and the U.S. government (on his trail because his incompetent assistant sold him out).

Eventually, the robot is blown up by a few gunshots, and the mad scientist and his assistant fly a biplane around, lobbing bombs off the side and blowing things up. Finally, he notices dozens of other planes coming to intercept him, so he forces his assistant to crash into the ocean, killing them and taking his space element with him.

The U.S. government is happy; the movie ends.

This was a tough watch, and that's only viewing the edited version. I can't imagine watching the full serials with a run time of about 4 hours. Yikes. That is an exhausting slog through a boring, repetitive world of one-dimensional characters and not nearly enough weird, creepy robot. This movie is a hard pass for me, and I'm a Lugosi fan. But make up your own mind--it's available free in many places, including YouTube.