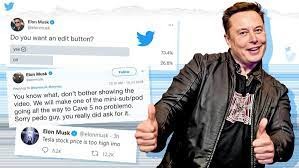 Decentralized social media just got the biggest boost it needed

the biggest news today or whenever you are reading this is that Elon Musk just bought Twitter, the social media platform that is acting as the internet equivalent of the “town square.”

I have nothing against musk and I'm a big fan of his and the things he does. I don't really mind that he bought Twitter, because I don't see him doing any irrational decisions like suddenly becoming a tyrannical ruler over the “ public town square”. if you think that. on a whim, he could enact drastic changes to how Twitter works, then, I don't know.

Most of us as so ill-informed about the details of this deal and how the power works within the company. Yet we are out there making irrational comments and opinions about what's going to happen

People are just signaling to other people.

Just look at all these outspoken people, mind you posting on Twitter, that they leaving Twitter, such dramatics, eh, haha.

people saying “this is my last post since he bought Twitter, etc‘. You should read the tweets’ that are flung toward the guy. ironically this is the point of free speech, the fact that people can criticize the guy is what free speech suppose to be. free speech “ is someone you don’t like allowed to say things you don’t like”. Elon quoted

today there was a huge surge in alternative social media platforms like “trust social” or counter social.

I am not political, I could care less about these rights or left people, libs, etc . these people are suddenly afraid that he would let all types of people whose speech are barred from being on the platform having a voice again.

why are you reading tweets from people you don't like, do they not know how Twitter works.

The main reason why the hate toward Elon

Anyone who knows anything about human psychology or has just been around them long enough knows that this hate is all because he is the richest guy in the world. when you are at the top, everyone below is trying to pull you down. Everyone is tearing down the guy, Years ago when he was not this publicly well known, people liked him, he was saving the environment with Tesla, and now it's like he is the devil. Now it’s he too rich, he has too much power, etc. If he was just another billionaire, not in the spotlight, nobody would care that he bought twitter that much. Being a very public person and this influential means it’s way easier to throw hate your way.

Is this the time for web 3 social media,

As much as I am a fan of Elon Musk and his antics and tweets, I even feel like, okay this is where we are headed, you own too many things now, too much centralization. I am not against the free market and capitalism but the rest of us are not going to be making any money form all the content we put out on Web 2 social media platforms.

Up until this point, I struggle to see how decentralized social media platforms like hive and the like would get any traction.

why would a bunch of people leave pre-existing social media platforms that have millions of users to go to one where there are not many users. Apps live and die by how many users use the platform. it does not matter how good any features are if there are no users. New Web 3 social media apps are okay, but they don't have any users so the content is very limited.