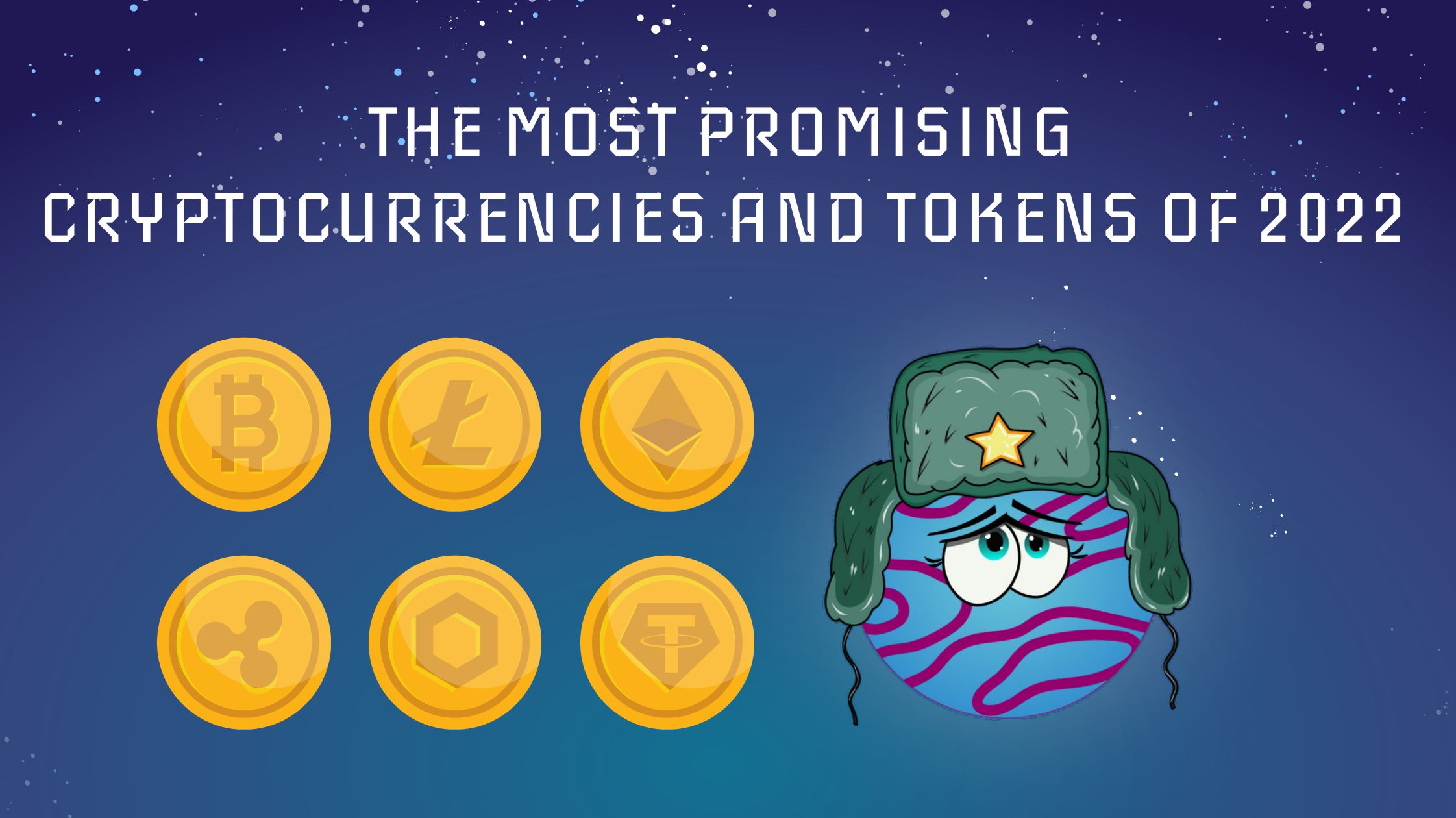 The Most Promising Cryptocurrencies and Tokens 2022

Is it worth investing in cryptocurrency in 2022 and why?

If you are seriously puzzled by this question and have sufficiently inquired about what a virtual currency is and how it works, then the answer is yes! It is important to take into account that cryptocurrencies remain assets with increased risks for investors. However, having significant investment experience, you can earn or invest in future prospects. It's important, that we're not giving any financial advises.

Coin and token – what is the difference?

Cryptocurrencies have their own blockchain. Units of such currencies are called coins. A coin has a measurable value and can be a settlement currency. Among them are Bitcoin, Ethereum, Litecoin, XRP, EOS, and so on.

A token is the same digital asset, but developed on third-party platforms, on a blockchain owned by the company, in order to participate in the network development and the execution of purchase and sale transactions. The most famous tokens are Tether and USD Coin, developed by the Ethereum platform.

Promising tokens stand out against the background of most digital assets with innovative project technology or improvements to existing protocols. Let's list the main factors that contribute to the growth of the token in the long term.
1. Technology.

It is not enough that the token simply repeats the technology underlying the original project. It is necessary to use unique features. For example, the Binance Coin token was originally created on the Ethereum platform, and the developers took the original smart contract as a basis.

The token should be used to solve real problems. For example, the UNI token is credited to liquidity providers on the Uniswap platform.

Despite the prospects of young projects, it is necessary to remember about the mastodons of the industry, whose creators are working on improvements. For example, the release of the Ethereum 2.0 update is being prepared – a scalable platform with sharding technology and PoS consensus, which may hinder the rapid development of other promising tokens for 2022.

The most promising tokens 2022

Uniswap is the largest AMM protocol based on the Ethereum platform. The project team issued its own ERC-20 UNI token and distributed it to users who made transactions on the exchange during the airdrop. UNI is in third place by capitalization among tokens after USDT and USDC with an indicator of $12.9 billion. The UNI token is credited as a reward to liquidity providers on Uniswap. The platform is in great demand, so UNI is one of the most promising DeFi tokens in the crypto space.

The Chainlink platform, released on the basis of Ethereum, provides blockchain oracles. These are nodes that transmit data from external sources, such as cryptocurrency exchange rates and event results, to the blockchain. The capitalization of the LINK token exceeds $10 billion.

The FTX crypto exchange token is used for various activities: staking, commissions payment and participation in the IEO from the exchange. The FTT token is compatible with the ERC-20 standard, and its capitalization is $850 million.

Aave is one of the largest and most popular landing protocols on the Ethereum network. Users can borrow and provide cryptocurrency on credit secured by digital assets, receiving rewards in AAVE tokens.

Graph is a decentralized protocol that indexes network data requests for blockchain networks such as Ethereum and IPFS, thereby ensuring the operation of DApp applications in the Web3 ecosystem. The Graph solution is used by the largest DeFi platforms acting as subgraphs: Uniswap, Aave, Synthetic, Balancer, and more than 3000 others.

A token issued by the largest landing platform Maker, which introduced its own DAI stablecoin. DAO Maker is the largest platform for holding launchpads, called on the SHO platform. The developers have implemented a system of tranches for the selection of investors: it means that only holders of large amounts in the DAO will be able to participate in launchpads because they are really interested in the project development.

The SHIB token is an alternative to the largest memcoin Dogecoin, which has grown more than 100 times in a year. Shiba Inu is called the "Dogecoin killer". The token is notable for its large issue, which amounts to 394 trillion, which allows you to buy a large amount of SHIB. In addition, users will be able to exchange the token on the decentralized ShibaSwap exchange.

Thorchain developers have introduced an inter-network protocol that allows exchanging cryptocurrencies and tokens between different blockchains. The platform is unique in using the mechanism of compensation for impermanent losses due to floating commissions.

The permanent leader in the world of cryptocurrency. It represents the most secure option of electronic assets among all existing at the moment. This electronic currency has been on the market since 2009, and this year it reached a peak in its price. According to analysts, bitcoin will continue to grow until the end of this year and will break its March record of 64 thousand dollars.

This coin was included in the list for obvious reasons. Ethereum strengthened its position in the market throughout 2020, and in 2021 it broke its record in value twice – 4.3 thousand dollars. Interest in Ethereum is fueled by the launch of Ethereum 2.0, which is scheduled to be completed by the end of this year. This cryptocurrency provides the greatest prospects for investment in the long term.

Litecoin is the "younger brother" of Bitcoin, created on the basis of its protocol and differs from it in ease of use, as well as higher speed. The speed of sending and receiving Litecoin payments can be compared to communicating in messengers. In addition, the withdrawal fees are lower than those of the credit card company. Litecoin also has an excellent capitalization – today it is more than $ 5 billion, which increases the popularity of this token.

Another dynamically developing cryptocurrency comes from China. The developers are focused on large financial corporations, not on ordinary users, like many other cryptocurrencies. They see their product as a bridge operating between traditional banking systems and digital payment technologies. The development team makes great efforts to modernize and promote their product. Ripple is already cooperating with Japanese and Korean banks interested in testing cryptocurrency technologies.

This cryptocurrency was first in the list of cryptocurrencies with the highest return on investment in 2020. This is one of the main arguments in favor of buying and selling and long-term investments in this token.

This token works on the Ethereum blockchain and is among the top five cryptocurrencies by capitalization. The peculiarity of Tether is that it is pegged to the dollar, which makes it less volatile. This feature will allow the token to gain popularity on all exchanges.

EOS is recognized as the world's leading electronic currency. In terms of technical characteristics (speed and scalability), it surpasses the leaders of the rating, Bitcoin and Ethereum. The token works on its own platform.Solana

The young cryptocurrency that appeared on the market in 2020, but has already entered the rating of promising cryptocurrencies for investment. Solana attracts its investors with two advantages: high and constantly growing data processing speed and low production costs.

A fairly new, but rapidly developing cryptocurrency. Despite its recent appearance on the digital asset market, it gives excellent results, being among the top five cryptocurrencies by capitalization. Cardano specializes in launching smart contracts and decentralized applications. It was developed as an alternative to Ethereum.

Perhaps the most unique cryptocurrency and blockchain currently existing on the market. This cryptocurrency has become widespread among gamers as it is used to pay for game content. According to experts, TRON has great prospects and an increase in value.

Certainly, now is the best time to invest in digital money. Every day new cryptocurrencies and tokens appear, and more companies, users, investors, and banks want to possess the coveted electronic money. Meanwhile, the prospects of the cryptocurrency market are expanding every day. Cryptocurrency, no matter how dubious it may be in its stability, has nevertheless occupied its niche in the world of financial assets that are gaining popularity. Electronic transactions, investments, trading, and mining have already entered and gained a foothold in the global economy.

However, before making a choice in favor of a particular cryptocurrency, wallet, and exchange, it is important to understand your needs. Do you require a cryptocurrency for fast trading and getting money here and now, or are you aiming for a long-term perspective? It is necessary to study the market of electronic assets and their course carefully, try several digital platforms for buying and selling electronic money.

Also, currently, Noft Games is currently working on NFT Collection. The project is currently at the production stage. The battle is now actively held as well as sales, functional and universe development. The world of Noft Games is exciting and breathtaking. It deserves your attention in Discord and Twitter. We advise you not to wait, but to start playing now!