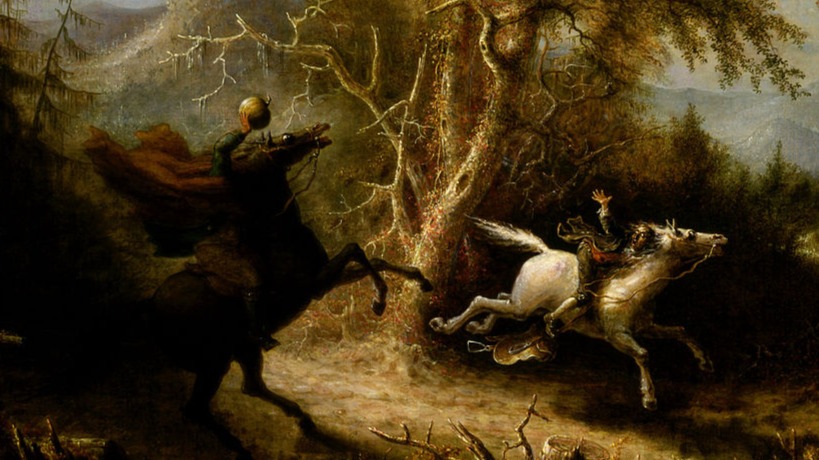 The Legend of Sleepy Hollow is a short fictional story crafted by Washington Irving in 1820. It was based on folklore of the American Revolution. A Hessian soldier was decapitated by a cannonball shot by the Americans in the battle of White Plains 1776. The Hessians and Prussians were fighting alongside with the British Soldiers to take down the Americans who wanted a fair tax with representation. The Headless (Hessian) Horseman was eventually buried at Old Dutch Church of Sleepy Hollow, NY.

Did you know The Headless Horseman was fashioned after the Irish Dullahan? The Dullahan also named ( Durahan , Gan Ceann ) is a class of unseelie meaning an evil or malevolent faerie. It is headless, sighted by folks in the dark of night riding a acephalous black horse and totes his/her head under one arm. The head's eyes are monstrous and flicker back and forth, while the maw holds a frozen horrific grin that spreads from ear to ear. This eerie cranium sports the texture and hue of fermented curds. The switch carried by the dullahan is a deceased body's backbone, and the caravans they transport are crafted from macabre funeral items such as candles in skulls to shed light at night, the wheel rods are created from femur bones, the cart's jacket is made from a maggot-munched shroud. Once the dullahan ceases riding, it stops on the spot where a specific body is due to die. The dullahan shouts out their name and suddenly the victim vanishes like a puff of smoke!

There is no way to block the lane against a dullahan, every gate and locks appear to open as it encroaches. The dullahan dislike being observed while on their travels tossing a pan of blood on these audacious, voyeurs (often a sign that they’re among the next to perish) and sometimes even whipping out the observer’s eyes with their lash. The Gan Ceann are afraid of gold, even a wee trinket scares them off.

The Headless Dullahan being has been mentioned several times in Folklore since Medieval times.
Here are just a few examples, "Sir Gawain & the Green night." The Irish Dullahan already explained.
A Scottish folk tale about Ewen from Clan MacEwan, decapitated in a clan battle over who would be the chieftain at Glen Cainnir on the Isle of Mull. There was even a Texas version of a headless horseman back in 1866.

The myth of the Green Knight, in the dark ages tale of "Sir Gawain and the Green Knight," who is ghostly, its flesh casts a green hue. It displays a nasty spirit and is bent to take Sir Gawain's life, even after Sir Gawain decapitates him! This folklore may have originated from the ancient Feast of Bricriu, with legendary Irish warrior Cú Chulainn in the bit played by Sir Gawain. 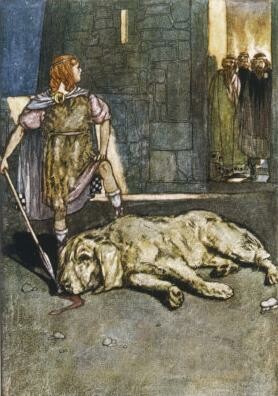