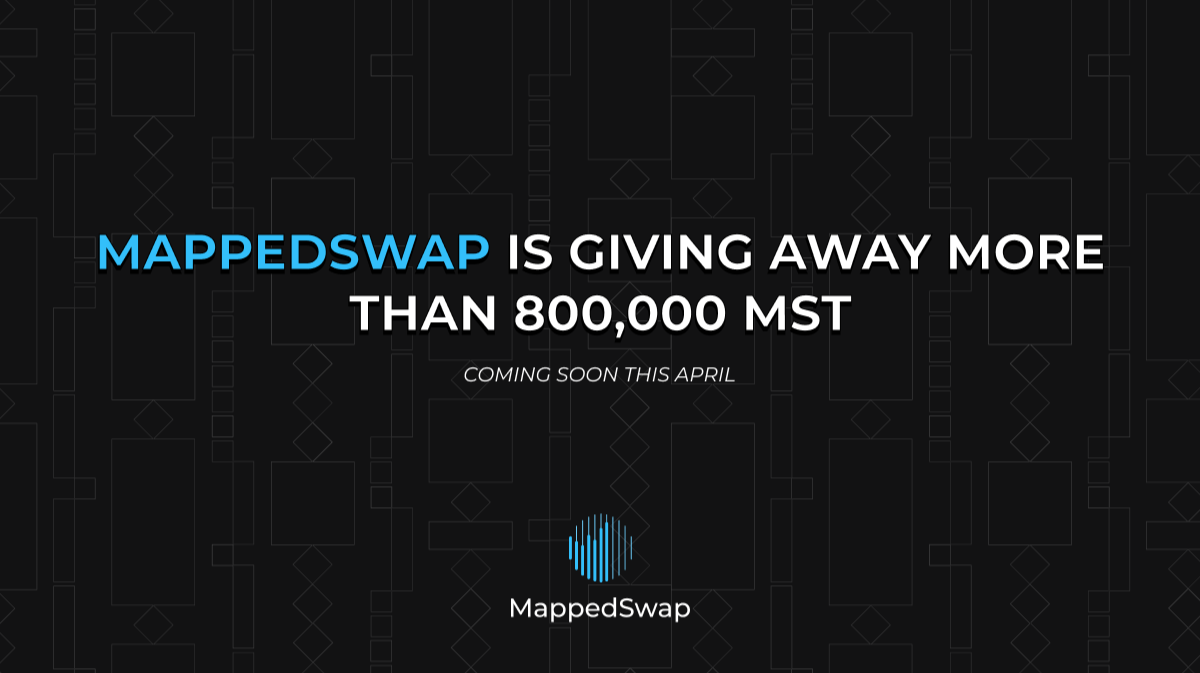 As per their recent announcement, MappedSwap's campaigns would be to increase their social media following and attract more traders to their 10X leverage cross-chain margin and decentralized exchange built on the high throughput and flexible ledger.

In the first campaign, the protocol is allocating 600,000 MST—the native token of the exchange—to Twitter users who complete simple tasks as directed.

To win, the participants must join, like, and retweet their promotional tweet while also tagging three friends. Afterward, the user must also watch MappedSwap's YouTube video and find a mystery code. Completing these two tasks means the user receives 12 MST.

The objective of the first campaign is to build up their Twitter following base and build buzz around MappedSwap since a user must tag three friends who must also fulfill the same conditions, creating a much-needed network effect.

MappedSwap will notify winners via Telegram and distribute rewards after a 24-hour verification. Users will claim their prizes from the protocol's referral page.

MappedSwap has also organized a trading contest as part of the second campaign, allocating 200,000 MST as the prize pool.

The objective, at this stage, is to showcase to traders the exchange's distinguishing features, including responsiveness, access to high leverage, low fees, and the benefits of the Eurus blockchain as the base layer.

To participate, users must first share the exchange's referral code on Twitter. From there, users can connect to their margin account on MappedSwap, trading to retain their stand on the leaderboard to stand a chance of winning a portion of the prize money.

At this stage, selection criteria for winners will depend on the trader's ability to keep a trade figure to at least $1k in value and consistently maintain a Profit and Loss statement at $10k in value. All the same, MappedSwap has stated that the first 4k traders can connect to the exchange without necessarily trading and receive 50 MST while maintaining their profit above $10k will receive 500 MST. The 50 MST will be automatically staked on the MappedSwap’s staking page subject to the participant meeting laid out requirements.

The MappedSwap Solution and Contribution to DeFi

Overall, the initiative by MappedSwap is well-timed, highlighting the value proposition of the high-leverage-supporting exchange. It also coincides with the increasing demand for DeFi and blockchain solutions as more traders opt to use trustless solutions, putting them in control.

Although Ethereum is still dominant with the lion's share in total value locked (TVL), the network faces scaling and performance issues limiting the capabilities of deploying dApps. Subsequently, to enhance the network's scalability, its developers have been promoting off-chain scaling solutions which may introduce vulnerabilities.

MappedSwap is deploying from the Eurus blockchain, leveraging the ledger's high throughput and performance to deploy a highly liquid exchange with low fees. It effectively resolves initial challenges faced by users launching on Ethereum while retaining its compatibility with the pioneer ledger.

Because of the enabling base, MappedSwap has high liquidity exceeding $6 billion and high trading volumes of over $130 million in the previous trading day.