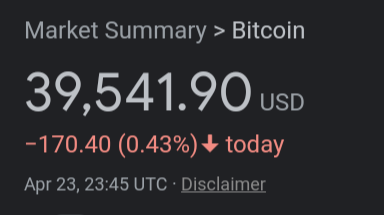 The other day a guy I know told me that he doesn't have faith in Bitcoin because it is overly volatile.

And looking at charts for the past 6 months, he isn't wrong about the volatility...in my opinion, he's wrong because of his reasoning.

Most people look at Bitcoin like they do stocks. If it's doing well, then they will grab what they can, and if it sinks, well, for most folks, that's the time to bail.

In an article a few days ago, it was said that there are only 21 million Bitcoin, and actually fewer knowing that tons were lost because of forgotten passwords and other reasons.

If Bitcoin were tethered to gold, then it would be worth what gold is worth at that moment.

If it were pegged to a billion dollar company, and the company tanked, then it would go from being worth a ton of money, to $0.

Looking at the image we see red. Bitcoin is $39,000 and going down. This alone makes people fear, and start selling.

If I were the kind of person who worried about the dollar price of Bitcoin, I'd probably start selling as well.

But I see that Bitcoin isn't just a new thing and something to trade on the stock market for a few bucks, it's a lot more than that.

It brings the banking system into our hands, and leaves the bankers behind.

I wrote a post about why the price of Bitcoin is being suppressed, and that's because of manipulation, and greed, because in reality it should be worth many times what it is.

But I know that there is more to Bitcoin than the USD price.

Being pegged to nothing, is better than having an artificial price.