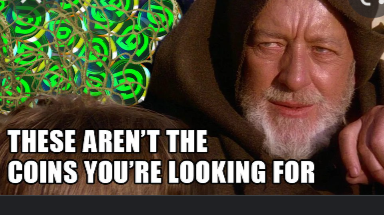 There are many good altcoins, and a ton of worthless ones.

Some excellent projects, some "meh" projects, and some downright terrible ones.

We are almost always looking for the next big thing, and while the whole system almost came down when Luna fell, we see the need for security in our investments.

But, at the same time, we need to understand that there is no real super 100% stable investment.

Bitcoin is what Bitcoin is, and while I stack sats, I don't overlook projects that are promising and have an alt attached to it.

It doesn't mean the project will 1000X and I will become a billionaire, and that's that. No, it's not like that at all.

I am looking for real world problem solving projects that have a coin attached to them.

As I said in the past post, a real honest project where there are real world applications, and a coin attached where I can buy/sell/trade, or whatever.

The altcoins projects that will come out on top, in MY opinion, are staking reward coins, or PoS, proof of stake.

But not all altposcoins are the same...

Take for example the StakeCube platform, and BTCPop.

BTCPop has POS coins for days, but most of them are worthless projects.

StakeCube has many of the same coins, and I really don't bother with the coins that I have checked into, and decided weren't for me.

I use the site for gaining interest, and staking as well, and I do click on a few of the faucets available.

I am eventually going to exchange the majority of the POS coins for Bitcoin anyway, so in reality, I see what I am doing is pretty much stacking sats...just first collecting different coins to exchange

The only way I see a coin as a junk coin, is when I can't trade it for Bitcoin later.

But the altcoins that I see as being serious in the near future are Decentraland, Sand, Enjin, many NFTs for the metaverse games, and many POS coins.

Many hate on me for saying pkoin, but what is the issue? PKOIN is from the decentralized social media platform Bastyon.

Bastyon is becoming a serious threat to censored speech, and the googles and youtubes we all know so well.

It's price has been pretty stable at around $1.25, and very little fluctuation in the last several months. (Maybe a better "stablecoin" than most stablecoins...lol)

But we need to use our heads when picking projects. We DONT need more regulation, or KYC, or any of that insanity, we need to think before we jump into something that may make us, or break us.

Like the droids Obi-wan told the troopers that they weren't the ones they were looking for, the alts that fly under the radar, under our noses, and we look past them, (like pkoin) are the ones that we need to take a second look at.

Why is CloakCoin a junk coin? What is wrong with FreedomCoin that has already been integrated into vending machines?

What about these coins and others that have a following, and just because they don't, or won't make us rich, we snub our nose at?

We need to check things out in a more down to earth, practical way, and really see what's going on around us.

Altcoins are not Bitcoin, and Bitcoin isn't THE BEST EVER AND THERE IS NO OTHER! coin available. It has its obvious flaws, and what it lacks, altcoins pick up the slack.

The altcoins we may not be looking for, may just be the ones we need, and as hard as that is to accept sometimes, like eating your veggies so you can have dessert, we need to check the projects that will be around when the terrible times come against us.

Thanks for reading, and let me know your thoughts in the comments below.