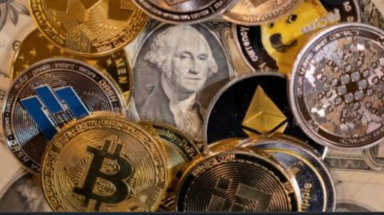 We all see it coming, even though many if us don't want to accept it.

The world stage is set for a change, and bad actors are already trying to mold it in the way they think it should be.

But with each individual bad actor, there are thousands of people with good intentions who are also trying to shape the future into something better.

The reason I got into crypto, as I stated in the last post was to drive awareness, and grow a community.

Now that Bitcoin is known everywhere, there is the need to get as much of it into the hands of people so that they too can be free from the bad actors in the arena.

It is interesting that a week or so ago, I posted on Bastyon that folks should stock up on Bitcoin, and a host of others.

But many mocked me for saying that they should have at least 10,000 Dogecoin available.

Now, looking at that post, and seeing what is happening at Twitter, I think I may be right.

So, here are the top 10 Coins that I believe everyone should have, and not in any order, just MY opinion.

Getting rid of the name brand losers like fakebook, and oppression Tube, we can enjoy posting and earning without the fear of them selling our info to the highest bidder.

#9. CloakCoin. I have talked about this coin before, but it was a quick few words.

This coin is rare in that just over 5,000,000 coins will be available. Everything about this coin is anonymous, and I believe that it will find it's place real soon.

At this writing, it is $1.75, and you can get some through StakeCube using the faucet.

There is the handsome 6% annual interest to boost, and their site says they are doing more to bring crypto to the masses.

#8. Bitcoin Cash. I will be getting more of this on noise.cash once I start posting again, and continue to post for the next 6 months to grow my sats there.

I see that Bitcoin Cash will be a major player in the years ahead, it's just now gaining ground with the implementation of smart contracts, and hopefully that will boost it into main stream soon.

#7. Dash. Dash is one of those coins that I thought very highly of a while back, and was stacking like others I normally do.

I still believe that it will be an important part of the future economy, just maybe a little less than Bitcoin Cash.

Hopefully the devs have more planned with this coin, and it too will change my mind back to where it was.

#6. Ethereum/Ethereum Classic. Yes, two separate things, but I'm placing them in the list because they will be major players as well.

Most know my dislike/distrust of Ethereum, but I am a bit on the fence with Classic.

It may be that I just can't understand what difference there is between the two, that one or the other can't do alone.

(Am I making any sense?? LOL!) So I will only ever own 1 Ethereum, but not sure how many Classic I will own... maybe in the comments help clear up my confusion...

#5. Cardano. Obviously this was going to be on the list. It has my vote over Ethereum every time.

Cardano is, and has been in a bit of a slump after the Africa announcement a while back.

Now, I don't care where Cardano goes to build it's network, I just see it being in a better place than Ethereum in the next year.

I also hope that it focuses on more than Africa, and goes to other developing countries...like where I am, Mexico.

#4. Dogecoin. But why?! Because it has a huge community, and since Bitcoin is a store of value, Litecoin is like silver, Dogecoin is like copper...and the copper is the community.

As I said on Bastyon, you don't get the coin because it is valuable in and of itself, but because there are thousands of folks willing to take it.

Forget about Twitter, and Dogecoin integration, just focus on the fact that there is a community...

#3. Bitcoin/Litecoin. The obvious two big ones. Just stack and do your best not to sell...

#2. ZCoin/Monero/??. Private, and mostly secure. I am placing these two together because they will be important in the years ahead.

Security, anonymity, are just a few reasons, but really I don't have any Monero stacked...I might need to take my own advice...haha.

Like CloakCoin, these two will be important to have.

#1. Staking or interest bearing coins. Yes, that is a bunch, and goes beyond my 10 Coins.

But finding a staking coin that you can trade for the ones I listed above, is really what counts here.

Get your hands on as many staking coins as you can, and when the time comes, trade for those that will be around for the tough times ahead.

I should have listed stable coins, and we should get those before the reset, not after, because we won't have a pegged crypto anymore... because I see that those currencies will be gone, and the stable coins will lose their peg.

Well, that's it for my list...if you see any I may have missed, because there are thousands of coins, let me know in the comments below.

Have a great day, folks!