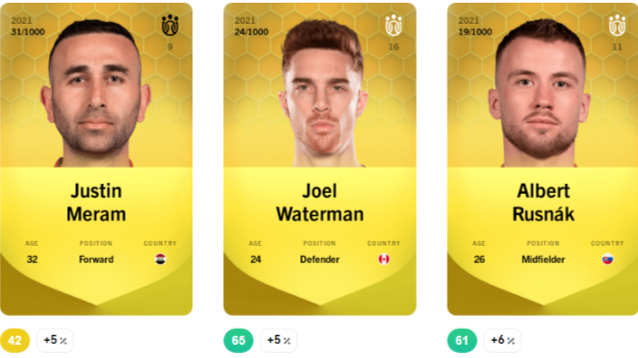 A few months ago, I have described my first steps in the fantasy football game Sorare; you can find this article here. Besides Gods Unchained, this is the NFT-based game that I spend most time on.

Since then, Sorare has introduced the new card rarity “Limited” (1000 cards per player per season) which is supposed to allow new players to join the fun at a less steep price tag than the existing rarities.

These limited cards play in separate divisions in which neither of the old categories can participate (not even “common” cards!). As in the other leagues, there are both ETH and NFT prizes for successful participants. The biggest drawback the new card category has is the fact that you cannot win any ETH by simply achieving a certain number of points (205 / 250 points to earn 0.01 / 0.02 ETH in Global All Star Division 4) like you can with rare and super rare cards.

How I am doing

I have put together a team of limited cards last week and I am excited to see whether or not it was worth it. I have spent roughly 0.1 ETH on the team, so a single top 3 performance would make this a profitable endeavor. Alternatively, 5–10 decent performances earning an NFT reward should allow me to cash out my investment as well.

To avoid the competition in the Global All-Star Division 5, in which all limited cards can participate, I have put together a team in the less crowded Champions America Division 5, which allows players from American leagues only. I don´t know if this is a smart move or not but I´m sure I´ll write about it at some point.

With regards to my existing rare cards, I am fairly happy with the team I am usually playing. I have invested roughly 0.2 ETH (~500€ at the time have bought the ETH) and won 0.06 ETH with this team already. The player who is contributing by far the most is Shamar Nicholson of RSC Charleroi who has had an amazing couple of weeks.

The area in which I am failing miserably is my trading activity. Shortly after I had joined Sorare, I traded a couple of young but not well-performing players for Marco Asensio of Real Madrid but I have never been all too happy with him, because of his lack of playtime at Real. When it became apparent that he would not be transferred to another club, I decided to get rid of him. I tried to sell him for ~0.1 ETH but found no takers so I started offering him to other managers in various deals. When I finally managed to trade him for Junior Negao, who has been scoring extremely well for various Asian teams in the past years, I was super happy at first; only then did I discover that the Chinese league was on pause until at least December. Had I properly researched the league before, I would have never accepted that trade. Now I just hope the league will indeed resume in December and he will continue to score like before the break.

All in all, I am still very happy with Sorare and even though I have made quite a few avoidable mistakes, I still think I can turn a profit from this game in my first 12 months of playing.

If you are interested in joining Sorare, feel free to reach out to me via Twitter (@TS9018) or Reddit so I can help you avoid the mistakes I made. Also, use my Sorare referral link so both of us get an additional player card after you have won your first 5 auctions.