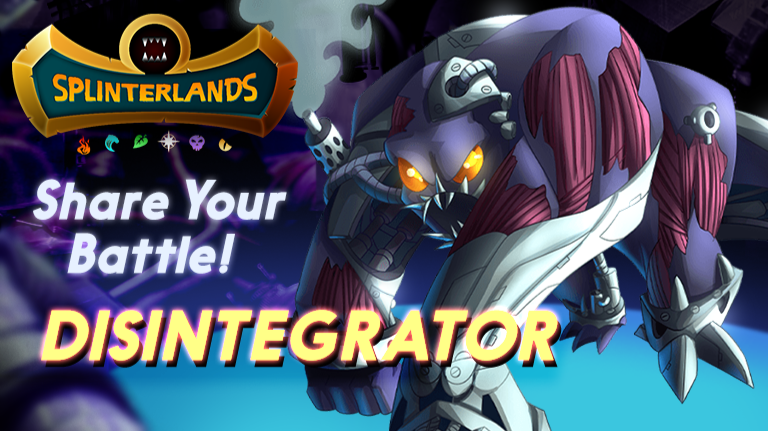 This week's challenge features the Disintegrator so let's get started by diving into the Lore so we can learn more about this Monster!

"The crazed tinker, Morloth, created the Disintegrator within his lair in the Badlands. Assembling various parts of other creatures together, he spent an age designing and building his masterpiece. The only problem was bringing it to life.."

So we have a mad scientist type building his own monster, let's find out where it goes...

"It wasn’t until he had a visit from a cloaked agent of chaos and was gifted the answer to his problems that the engine burst into life."

Uh oh, if the Chaos are getting involved I don't see this going well or having a happy ending!

"The pair spoke for days and deals were made, adjusted, broken and presented again. Morloth grew frustrated with how long it was taking, all he wanted was to have more of the sickly, green crystals that the agent had placed within the heart of his creature, bringing it to life. Whether he eventually tired of the bartering and was worn down, or the taint of chaos itself had afflicted him, Morloth agreed to the terms laid out by his visitor."

I have a bad feeling about this!

"With a large sack of the chaos fuel and the promise of an endless supply in the future, all he had to do was keep his side of the bargain – persecute and destroy the people of Praetoria. He quickly produced more of the misshapen beasts and now, with his pets in tow, he terrorised Praetoria and all its inhabitants."

Knew it! Nothing good as ever come from dealing with a Chaos Agent.

"With the torso of a mountain gorilla, the hind quarters of a crocodile and the mouth of a leach, the Disintegrator is a mismatch of devastating qualities. Its strength is formidable, twisted strands of metal combined with great sinews of muscle. When the heavy forearms and tail strike its foe, it will pummel them into submission without mercy. If that fails to work then the monster’s evil jaws will latch onto its prey, numerous splayed fangs locking onto their body as it sucks the life from them. The obscene golem strikes terror into its foes wherever it goes and it has been known to continue to fight even after the yellow glow of life has left it eyes."

Damn! That's pretty intense and really helps me get an idea of what this monster would have been like to face on the battle field. I think the Splinterlands team has done a great job setting the tone and building the characters of the game up.

Now that we know more about the Disintegrator from a lore stand point, let's see how it translates to the in game monster.

Of course it's a melee monster as everything in the description talked about hitting, striking, or biting. It only has 1 speed which makes sense as a reanimated corpse that the monster would be pretty slow. Middling armor and health also makes sense as I wouldn't expect it to be super tanky but not fragile either.

I like the Demoralize because the Lore continues on, talking about the Disintegrator's being unleashed on small towns and villages, feeding on the inhabitants and I think those town's folk would be very demoralized to see a Disintegrator rampaging through town!

Trample, Knockout, and Retaliate all fit as extra abilities and I imagine the Disintegrator going after townsfolk one by one in quick succession and retaliating against any one willing to fight back.

Overall, I think they did a good job of creating Disintegrator's lore and then building the monster in game!

Let's go over the team for the upcoming battle. We start things off with Tarsa, our summoner for this battle. She's the new fire summoner from the Chaos Legion set and I like her quite a bit.

Her +1 melee attack and +1 health buffs are great additions to any team focused around melee monsters and she works well with Disintegrator since you're raising your monsters attack while reducing your opponents. Makes for a great front line monster as long as your opponent isn't going heavy on magic damage. This one's not just a tank though as it has plenty of offensive capability as well, especially under Tarsa. As we went over earlier, it's not the fastest or the strongest melee monster so it's kind of niche but what it lacks in overall combat ability it makes up for with it's abilities in certain rulesets. is a powerful sneak monster for 5 mana that synergizes well with Tarsa and the rest of the team.

It's job will be to penetrate the back lines and hopefully pick off squishier opponents, removing threats quickly without having to get through the enemy front line monsters and tanks.

Now on to the battle!

Link To The Battle Here 🎁 This is a recent battle from the Kobold Mining Tournament so it's more important to me than a normal battle. After heavily considering the rules and thinking it over I decided to play the lineup of Living Lava, Disintegrator, and Tenyii Striker that we just went over.

I considered my opponents lineup as I was creating my own but I didn't like how the Magma Troll would be doing ZERO damage to the Living Lava once you factor in the Demoralize and Shield abilities. Overall, I'm feeling pretty confident because this is exactly what I expected and built my team to beat.

And Disaster strikes! Both my Living Lava and Disintegrator only had a 10% chance to miss an attack and both of them did!

When the smoke clears, my opponent has 1 monster with 1 HP left so those two misses were absolutely back breaking.

When we think about "Did my strategy work?" I would say it did, but sometimes you lose anyway thanks to RNG and there's nothing we can do about that so I wouldn't change my tactic, it is what it is.

Even though I lost, I hope you can see the power Disintegrator can bring to the battlefield.

Thanks for reading and special thanks to the Curators who chose to spend their time going through all of our posts and voting on them, it's much appreciated.

Recap of my Win in the ForeverAverage Deligation Tournament