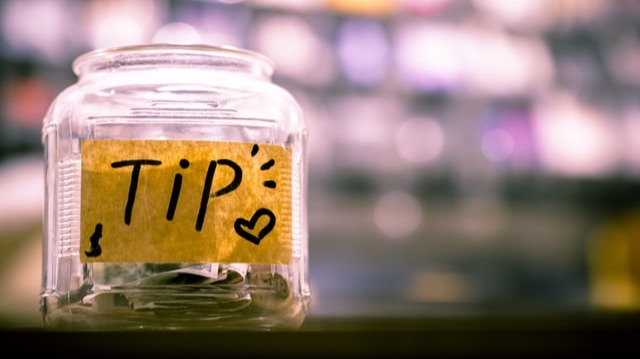 When you eat out at a restaurant, what is the proper amount to tip your server? A quick survey was conducted on a busy street by CNBC, and multiple responses were provided. No question, it should depend on the quality of service that was provided, but what is generally accepted as proper tipping etiquette? Here's are my Top 5 Tips on How to Tip at Restaurants.

Should your tip be based on the pre-tax, or the after-tax amount shown on your bill?

It's generally accepted that a tip is calculated as a percentage of the final bill. According to etiquette expert, Lizzie Post of The Emily Post Institute, it is accepted convention to calculate the tip based on the pre-tax amount. The great news is that if you have been tipping based on the after-tax amount, incorporating this simple change will allow you to save some money moving forward!

Tip 5: Base your tip on the pre-tax amount shown on your bill

How much should you tip?

According to Consumer Reports, you should aim to tip between 15%-20% of the pre-tax total on your bill. They state that most people leave 20% indicating they received a satisfactory level of service, with 15% indicative of an averages level of service.

Did you know there are locations where you do not need to tip?

You may be surprised that leaving a tip, also known as a gratuity, is not normal practice in some countries.

Although tipping is no common practice in these countries, it is still appreciated if it is done discreetly.

Tip 3: Learn the tipping etiquette of your destination before you travel

How can I get a discount on my tip?

The average cash transaction in the US costs $22 according to Fundera. If you are still using cash to pay at restaurants, consider applying for a loyalty/rewards credit card. If you are able to pay off the full balance every month, you can take advantage of accumulating points, or even cashback, depending on the credit card. So if both your meal and your tip are paid for with your rewards credit card, you are also earning rewards on your tip, which can be spent at a later date. You can think of that as a "discount" on your tip.

Tip 2: Pay your bill with a rewards/loyalty credit card if you can pay off the entire monthly balance

Tipping can be used as an investment

This is for those of you who work in sales, business development. Kevin O'Leary of Shark Tank fame recommends this technique if you plan on visiting a neighborhood restaurant on a regular basis.

You want to establish a relationship with the waitstaff to take care of you....If you're investing in that place and you want to establish a relationship, and you get great service, put a bill, a $20 bill down (on top of your original tip). When you give cash, generally speaking, that's theirs and you're showing respect that they don't get from anybody else. You're saying to them, "You were great to me, I want you to remember me, I'm investing in you," - Kevin O'Leary, March 14, 2018

This is a great life hack, which can also be used to develop a "go-to" destination when you want to eat out for an important event, such as first date, an anniversary, or a birthday.

Tip 1: Use tipping as an investment for great service in the future

Why tipping is important

Workers in the service industry in many states often earn the minimum wage or less, and they rely on tips to supplement their income. It's notable that Consumer Reports advises against withholding a tip in all cases, even when you have received an unsatisfactory level of service. For those instances, they recommend that you speak with the manager. After all, who doesn't deserve a second chance?