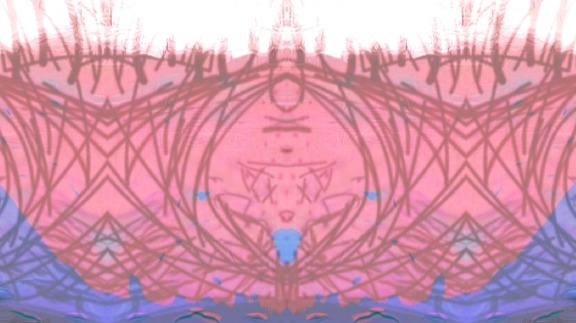 When I was 18 I was put in front of a psychologist and given an evaluation. I was locked in a mental institution. The evaluation consisted of me communicating about what I was going through.. I told the psychologist I was talking to the T.V. and that it was based off a idea that kelp was some crimson organism. I realize that believing in a crimson organism like kelp. Would and could be far fetched in 2003 A.D. Communicating with the T.V. though was far from false. A few years prior I was sitting in my room doing homework. While taking a break I decided to practice writing algorithmic codes. When I completed the task. My lights in my room began to flicker on and off. There were no people by the switch on the wall and it only affected my room. A Few months later my old box T.V. while watching "Whose Line is it Anyway" with host Drew Carey opened a "Black Box" in the middle of the screen leaving about 2-3 inches of program behind it. The only way I can describe it was like looking at a Dos program wired to the T.V. that opened itself. I Drew two Conclusions through these events that 2002 was capable of monitoring through the lights themselves and a universal Wi-Fi was in place. I experienced Many years of Doctors calling me crazy. Poking me drawing blood and forcing pills on me that I didn't want to take. When I refused I was held down and injected with sirums. The only way I was released was to Rebuke my own beliefs and opening lie about everything I had experienced. With apologies or I would not be released. For fighting against my captures I was put in front of judges. There was no fair trial or room for reason. I would be put under court ordered treatment. I was later given a conservator told I was grossly incompetent, Ill, and labeled Schizophrenic. I went many years wondering from group homes, to homelessness, to doctors. With no hope of life beside government handouts. With no phone, mailbox, or freedom. I was unable to secure normal job placement. This would haunt me… I was a free ranged kid that experimented with many things. Drugs not being withstanding, I turned to these over and over for answers. I found none only ridicule and isolation. I found myself living many years in a group home that I had freedom to come and go. This was decent compared to many other years. I was still forced to take meds. Or be ridiculed, lose placement, or be put under review of mental state. I took this opportunity to attend college. Mainly for the supplement of income from government scholarships. I took business classes. Then eventually ended up pursuing News Media. I found that in News Media that "If it bleeds it reads" was the only concept driving the industry. I had lost many faiths in the next years. To know that two organizations would profit from suffering would turn to Three. Military, Medicine, and Media.. The Three M's that drive the world. Also destroy with the degree of intelligence, wisdom, and luck...are extinguished and snuffed to keep the masses subservient and unaware. Today's technologies have only grown. Are very blood has become our weapon. The base of science is to make something that is useful and make it to a poison. It is just a matter of boiling it down, breaking it down, and or extracting properties. Then and only then does it become profitable. I later became aggressive. During the pregnancy of my first and only child I assulted the mother of my child, during pregnancy. I was put on court ordered treatment again. While being released I was told by a nurse. You are being issued into the FBI. After many months I did not receive a badge a check or prestige. The only thing received was my mother apologizing saying a military associate validated the original claims I made in front of my psycologists. I have been having trouble with these validations. It makes me angry. It makes me feel my statements above are true. I like to see the best in the world. The best in this case are the privileged are fundamentally evil. It makes me question religion, faith, and equality. I do wish all a "Happy New Year" I hope that you are not censored or ridiculed for speaking truths that you believe in. It is probably the only religion people can't take.. even if your mind is up your ass. Stay safe, and healthy.