Brave still not active outside of the States.

(new update about this below read it)
I'm from Belgium, and I've used Brave pretty much since I ran into it.
Never have I ever gotten a single token.
This is making it possible for them to grow outside of there value by using people like me.

Brave should have given me about 56,6 Bat. Instead I get nothing and no one else is either, where is that Bat?

I'm not to happy about the fact that some people also share Brave as a Free earner since it's only in the USA
and so far two posts I've read tonight haven't added that key piece of information which keeps making them
more and us nothing at all.

Are we not good enough for you?

Why have we been left out of this for so long? 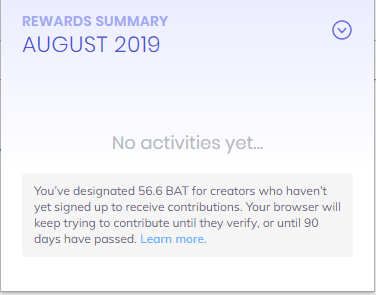 You sell something but so many of us keep on waiting while you rep the benefits. This is very wrong and should
be corrected over time. I have earned that Bat and I should get it. Period!

(new update, read it)
I seem to have learned just now that someone is using a Beta version of Brave and has the option to earn in Italy.
https://brave.com/download-beta/

It seems once again people that are trying to be experts only care about there own profits and not about the post
they make.

I'm a critic I know, but I'll be who I am as it was intended to be on this awesome site, I'm becoming to enjoy.
I hope people now have the right tools to start earning Bat with Brave Beta.


I'm on Brave myself now, I have to reinstall and hope nothing is going to be lost :/